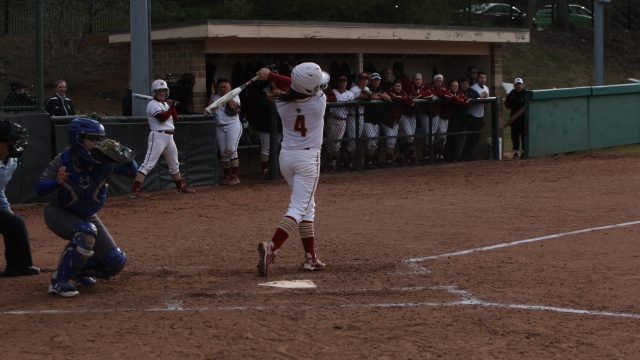 Boston College softball’s Jessica Dreswick has logged the second-most innings in the ACC. The junior also ranks in the top-five of every major pitching statistical category—wins, strikeouts, and earned-run average. But when the Eagles traveled to Chapel Hill over the weekend, not even she could quiet North Carolina’s offense.

The Tar Heels, who average more runs than any other team in the conference besides Florida State, tacked on a total of 17 in their sweep of BC.

On Saturday alone, UNC scored eight runs. But initially, it looked as if the Eagles had a chance to salvage a game in the series.

For the first time all weekend, BC got on the board before the Tar Heels. Leading off, Taylor Coroneos singled through the left side. In order to advance Coroneos into scoring position, Chloe Sharabba sacrifice bunted. Then, a passed ball allowed Coroneos to take third. All Annie Murphy needed was a fly ball to score Coroneos, but she got way more than that—ahead in the count, Murphy doubled to right field, and Coroneos crossed the plate for the game’s first run.

Right after that, Tatiana Cortez hit a double of her own, scoring Murphy. Later in the inning, Allyson Moore singled, moving Cortez to third, but that’s as far as she’d get. Eventually, Lexi DiEmmanuele grounded out, stranding two Eagles on base.

Dreswick looked strong in the first two frames, as she held UNC to just one hit. But, thanks to a BC throwing error and a Taylor Wike double, the Tar Heels cut the deficit to one in the third inning. And shortly after, they tied it all up. Well, Brittany Pickett tied it all up.

In the top half of the inning, Pickett, who picked up wins in both games of Friday’s doubleheader, replaced Kendra Lynch on the rubber. And in the bottom half, she homered to left center, giving herself some run support.

Pickett retired the side in the top of the fifth, and the Tar Heels’ scoring spree began. Berlynne Delamora drew a walk to get things going. Brittany West was then called in to pinch run for Delamora, and Lynch was brought in to pinch hit for Hailey Cole. The switch paid off. Lynch launched one over the fence in right-center, giving UNC a two-run lead. But for the Tar Heels, that wasn’t good enough.

Whether it was a single through the hole or a walk, UNC continued to reach base. The Tar Heels scored three more runs before Dreswick was pulled. Jordan Weed came in to relieve Dreswick and stop the onslaught. Ultimately, she did, but only after Delamora singled through the left side, scoring UNC’s eighth and final run of the day.

BC responded with one run in the next inning, but small ball was not anywhere close to enough to compensate for its fifth-inning meltdown. Weed and Pickett traded scoreless innings to round out the game, and the Tar Heels claimed the 8-3 victory.

Unlike Saturday’s contest, UNC established an early lead in both of the Friday games.

The second game featured a pitching duel between Dreswick and Pickett. But all it took was two Tar Heel runs in the third inning to decide the game.

Coming into the inning, UNC had recorded just one hit. And once again, Dreswick all but silenced the Tar Heel bats. As a result, UNC turned to patience at the plate and aggressive base running. Destiny DeBerry and Wike drew walks to open up the frame. To make matters worse for the Eagles, DeBerry and Wike stole their respective bases during the ensuing at bat, edging closer to home plate. Soon after, Katelyn Shifflett doubled to right field, bringing home both of her teammates. Just like that, it was 2-0.

From that point forward, UNC only got one more hit off of Dreswick. But two runs was more than enough for Pickett, who went all seven innings, striking out six and allowing only three hits.

Dreswick countered with a comparable performance on the mound, but BC could not produce any kind of offense.

Much like the latter portion of the doubleheader, the Eagles struggled to get a piece of Pickett through the first six innings of play in the series opener.

On the other hand, it didn’t take UNC long to get a hold of Dreswick. In the bottom of the first, Shifflett singled up the middle. Then, Dreswick hit Delamora with a pitch. West replaced Delamora on the basepath. For a moment it appeared as if Dreswick regained her accuracy, as she fanned Lynch with just three pitches. But she walked the next Tar Heel batter, loading the bases.

Leah Murray grounded to shortstop, but Sharabba misfired on her throw to third, allowing Shifflett to score. UNC left three on base, but it took the lead.

The Tar Heels’ scoring didn’t resume until the fourth inning. But when it finally did, runs came in bunches.

It all started when Pickett reached base on a walk. Campbell Hutcherson then came in to run for Pickett. Micaela Abbatine singled through the left side, moving Hutcherson into scoring position. Next, Dreswick walked DeBerry—the ensuing batter—loading the bases. Wike capitalized on the opportunity, doubling to center and scoring Hutcherson and Abbatine.

Dreswick proceeded to walk in another run. And to top things off, she gave up an RBI single to Katie Bailiff. Having walked four batters and allowed just as many runs in one inning, Dreswick’s outing was cut short in the fourth. Weed’s number was called in the bullpen. She quickly ended the inning, but over the course of the next two frames, she too fell victim to the UNC offense. By the top of the seventh, the Tar Heels maintained a 7-0 advantage.

In a last-ditch effort, the Eagles put together four runs in the final frame. But it was by no means pretty. All but one of BC’s runs were unearned. If it wasn’t for a few miscues in the infield, the Eagles could have been staring at a shutout.

Despite winning every ACC series prior to its meeting with UNC, BC has consistently struggled offensively. In the past month, the Eagles have only posted one five-plus run performance. If anything, their three games against the Tar Heels uncovered a weakness that was previously disguised by winning.