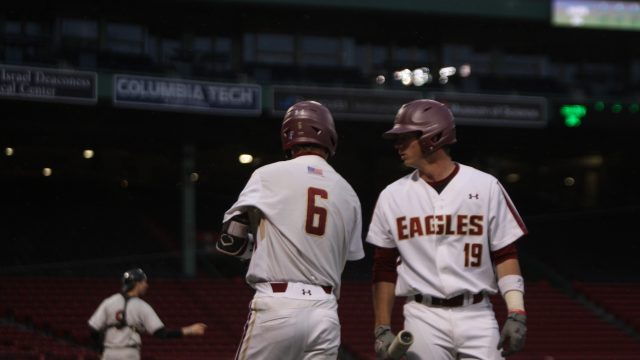 Jacob Yish remembers when he first met Pete Frates as a freshman in high school. It was before a football game, and Frates came to talk to his team minutes before game time.

“He gave one of the best pregame speeches that I’ve ever heard in my entire life,” Yish recalls. “I still remember that to this day. I’ve been kinda close with Pete all throughout high school, and here it’s tough not to be close to Pete.”

The now-college freshman attended Frates’ alma mater, St. John’s Prep, where the two developed a friendship that only strengthened when Yish decided to play for head coach Mike Gambino and become a part of the Birdball family. Frates, a former Boston College baseball captain who was diagnosed with Amyotrophic lateral sclerosis (ALS) in 2012, has impacted many, like Yish, with his inspirational story of resiliency. As one of the creators of the viral Ice Bucket Challenge, he helped raise $220 million in six weeks for ALS research. Already, that money has funded scientists who identified a gene variant connected to the disease.

So when Yish stepped into the batter’s box at Fenway Park for Saturday’s annual ALS Awareness Game, he remembered who he was playing for.

North Carolina State had fallen in a 2-0 hole in the first inning, and Yish had a chance to make it a big inning with runners on first and second. The Byfield, Mass. native ripped one through the right side and plated a pair of runs, extending the BC lead to 4-0. That would be all the run support Jacob Stevens needed, as the Eagles’ ace allowed three runs over 6 ⅔ innings and picked up his fourth win of the season in a 8-3 victory over the Wolfpack (20-18, 8-11 Atlantic Coast).

Energized by the pregame ceremony honoring Pete Frates and NC State’s Chris Combs, it didn’t take long for Birdball (13-22, 4-15) to strike in the first inning. Donovan Casey led off with a single up the middle and Jake Palomaki walked, immediately forcing Wolfpack starter Sean Adler to work from the stretch. The heart of the order hit the ball hard, but both Michael Strem and Gian Martellini lined out straight to NC State fielders.

With two outs, Mitch Bigras extended the inning with an RBI single through the right side. The rally continued with Jake Alu, who doubled into the gap, driving in Palomaki to make it 2-0.

“We kinda all know what Pete means to us, so we just kept that with us as we came out in the first inning and scored four runs,” Alu said.

After Yish’s two-RBI single, the happiest man in the dugout may have been Stevens, who returned to the mound with a rare early lead.

Stevens consistently attacked the strike zone, kept his pitch count low, and silenced the Wolfpack offense until the sixth inning. In the top of the frame, NC State narrowed BC’s lead to just one with three runs off Stevens. The major blow was a two-out, two-RBI double down the left field line off the bat of DH Brad Debo.

With momentum beginning to shift, the Eagles responded with another rally.

“A big thing we talk about is, ‘Pass it back to the next guy,’” Alu said. “Everyone is just feeding off of each other. That’s how baseball works.”

The bottom of the order passed a full plate back to the top, as Johnny Adams and Brian Dempsey singled to put two men on with no outs. Then, BC witnessed a common occurrence in baseball: Turn the opposing pitcher into a fielder, and you never know what might happen.

Casey got caught off-balance and grounded one back to reliever Joe O’Donnell, who fielded it and threw home in an attempt to nail the streaking Adams. But his throw went wide and Adams slid home safely, pushing the lead to 5-3. The next batter, Palomaki, bunted down the third-base line and reached after O’Donnell’s throw to first sailed high. Back-to-back errors cost the Wolfpack two runs, if not more.

After Palomaki’s bunt loaded the bases, Strem put the nail in the coffin with a two-RBI single that increased the lead to 7-3. Gian Martellini followed with another hit—the Eagles’ sixth-consecutive baserunner—to plate Palomaki for the final run of the game.

The bullpen held the lead, with Witkowski escaping a threat in the seventh, shutting the Wolfpack down in the eighth, and passing it off to Casey for the ninth. The win marks the third ACC victory in the team’s last four games after winning just one in its last 12 tries.

But for BC, which always seems to play better when Frates is watching, this win means much more.

“It definitely meant a lot to me, knowing Pete for a while now,” Yish said. “We had Pete Frates games in high school, but none of that compares to playing at Fenway. It was great to come out here for a great cause, put all our energy into the game, and get a win.”