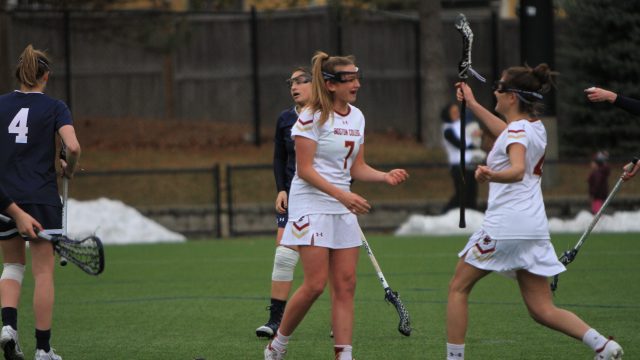 It was Boston College lacrosse’s 12th victory of the season, but different from the previous 11. With the win, head coach Acacia Walker became the winningest head coach in program history (65 wins), the Eagles honored its five seniors on Senior Day, and they closed out the regular season with a dominant conference victory. But for several stretches in the first half, you might’ve thought that Notre Dame, not BC, would win. An especially productive second half, however, carried the Eagles past the Fighting Irish, 16-10. The Eagles will take on Notre Dame next week in the ACC Tournament in Richmond, Va.

It didn’t take long for Notre Dame (11-6, 4-3 Atlantic Coast) to find the scoreboard in the first half. Cortney Fortunato, a top-5 goal scorer in the country, netted her 54th goal of the season a little more than five minutes into play after beating BC (12-5, 3-4) goalie Zoe Ochoa. 62 seconds later, Casey Pearsall found the back of the net, giving Notre Dame an early 2-0 lead.

Not to be outdone, BC stole a goal back on the Irish 30 seconds later. Kenzie Kent found Kayla O’Connor open by the net, and O’Connor hurled the ball past Notre Dame goalie Samantha Giacolone to halve the Irish lead.

The Irish responded by scoring two more goals, building up a 4-1 lead less than 10 minutes into play. Alex Dalton and Grace Muller recorded the goals, with Fortunato building up her stat sheet by adding an assist.

Rather than lose momentum and allow Notre Dame to build up an even bigger lead, the Eagles fought back, keeping play mostly even for the final 20 minutes of the first half. The first opportunity to eat into the Irish lead came with just under 17 minutes remaining in the half, when Notre Dame’s Katherine Eilers committed a foul, giving BC a free-position shot. Kate Weeks, a top-5 goal scorer in her own right, took the shot and expertly placed it past Giacolone.

With 15 and a half minutes to go, the Eagles got another golden opportunity when Eilers was whistled for another foul. This time, O’Connor attempted the free-position shot, but Giacolone managed to save the shot.

Ochoa wasn’t quite as lucky a few minutes later, when, assisted by Dalton, Heidi Annaheim put the ball past her to bring the score to 5-2, Notre Dame.

The Eagles scored three consecutive goals to tie the game up. Apuzzo scored two of them—one assisted by Kent and one off of a free-position attempt—for her 52nd and 53rd goals of the season, respectively. With just under three minutes in the half, Kent scored her first goal of the game, erasing Notre Dame’s early advantage and equalizing the score.

Unfortunately for the Eagles, they couldn’t score again in the half—or at least prevent the Irish from scoring. A foul on Christina Walsh gave Notre Dame a free-position shot with 57 seconds remaining in the half, and Muller put it away past Ochoa to regain the lead. Less than 20 seconds later, Dalton also beat Ochoa with a shot. Heading into halftime, Notre Dame held a 7-5 lead over the Eagles.

In the second half, BC took control, outscoring Notre Dame 11-3 over the 30-minute period to capture and retain the lead. For the first 10 minutes of the half, however, it remained close, with each team taking advantage of free-position opportunities.

The teams traded goals again—or, rather, Hart and Pearsall traded goals again. Hart beat Giacolone to tie the game up at eight, but Pearsall scored on Daly again to give the Irish a 9-8 lead. It was the last lead Notre Dame would hold, however, as BC outscored the Irish 8-1 in the final 20 minutes of play to earn the victory.

First, Kent tied the game at nine with a goal with just over 19 minutes to go. Then, a quick flurry of three goals in 62 seconds built up BC’s first lead of the day, giving the Eagles a 12-9 advantage. BC spaced the rest of its goals out, with Frankenfield, Kent, and O’Connor scoring in the final 16 minutes—including two goals from Kent—to round out BC’s tally at 16 goals for the day.

Notre Dame managed to steal back one more goal when Savannah Buchanan beat Daly, but it wasn’t enough to overcome BC’s lead late in the game.