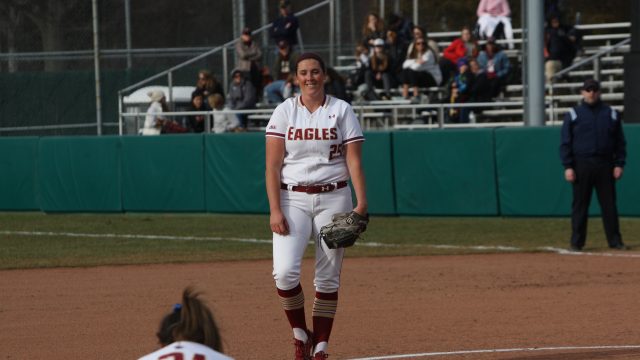 Thanks to Dreswick, Eagles Record First Series Sweep of Season

Nothing provides a security blanket to a reeling softball team quite like an ace pitcher. She gives the entire team a jolt of confidence, blocking out memories of recent painful losses. An innings eater and a streak stopper, she turns the tide for her team just by her presence on the mound.

For Boston College softball, Jessica Dreswick is unquestionably that kind of pitcher. Coming into this weekend’s series with Georgia Tech, the Eagles had dropped four-straight games, including a sweep last weekend at the hands of conference rival North Carolina. But backed by Dreswick’s dominance, the team punctuated a weekend sweep with a dominating 8-3 victory on Sunday afternoon.

Picking up the victory in all three games this weekend, Dreswick improved to 20-10, surpassing the BC (27-18, 11-6 Atlantic Coast) single season record for victories in a season, a mark that had been set in 2015 by current junior Allyson Frei.

After giving up a solo home run to the Yellow Jackets’ Draven Sonnon in the top of the second inning, Dreswick breezed through the next four innings without giving up another hit. Despite not starting the seventh inning, with head coach Ashley Obrest looking to steal an inning of rest for her workhorse ace, Dreswick reentered the game to record the final two outs, after teammate Jordan Reed conceded two runs while only recording one out to begin the frame.

In an early 1-0 hole, the Eagles took the lead in the bottom of the second despite only getting one hit that left the infield. Behind an infield single from Lexi DiEmmanuele and a bunt single by Allyson Moore, BC loaded the bases with one out. After a wild pitch allowed DiEmmanuele to score the tying run, the Eagles erased the Georgia Tech (14-33, 6-15) lead for good on an RBI single by sophomore Dani Thomas.

Though that was all the run support Dreswick would need on the afternoon, the offense wasn’t done yet. After scoring one in the fourth inning, the Eagles added three in the fifth and two in the sixth, with Jordan Chimento’s solo homer in the sixth serving as the exclamation point. The blast couldn’t have come at a better time for the junior catcher and BC’s third leading hitter by batting average, as she had recorded just two hits in her last seven games.

With the win, the Eagles remain tied in the loss column with North Carolina and Louisville for second in the conference behind No. 2 Florida State, who still has not lost an ACC contest. The kudos for the team’s competitive effort in conference play goes largely to Dreswick, who has now pitched in all 17 of the team’s ACC games, requiring no relief help in seven of them. And she should get the chance to make this season one of the truly memorable ones in program lore. With eight regular season contests, plus postseason competition, she should be able to set the single season record for starts in a season and even has an outside chance to top the program record of 245 2/3 innings pitched in one season.

Regardless of the records, the team is just happy to get back to their winning ways. And heading down the stretch of the season, their confidence should only grow, knowing the deadly weapon they will send to the mound for big games. 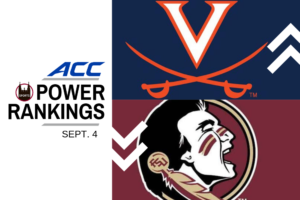