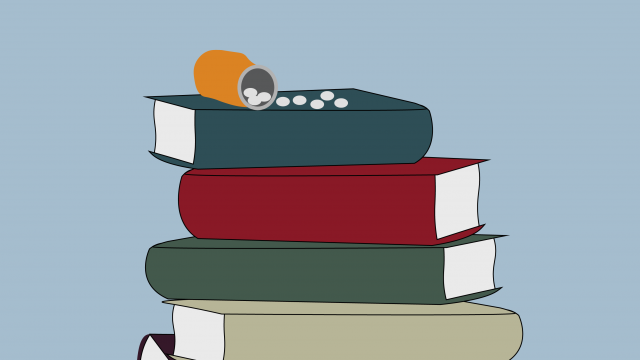 I recently received an email from the Boston College Office of Health Promotion with a link to the CORE Alcohol and Drug Survey. Seduced with the chance to win a $50 Amazon giftcard, I completed the questionnaire, providing information about, you guessed it, my drug and alcohol use. One part of the survey that stuck out to me, which is also something I’ve held conflicting opinions about lately, concerned the use of prescription stimulant drugs, namely those used to treat ADHD, like Adderall and Ritalin.

It’s pretty well known that many college kids are taking stimulant medications, whether they are prescribed for ADHD, taken to aid in studying, or used recreationally. For those with attention deficit disorders, the drugs bring them a level of normalcy that allows them to more easily complete the tasks others might take for granted. For those without disorders, the drugs may be seen as academic performance enhancers. They don’t make people smarter, but they are known to increase focus, alertness, and energy. These effects also translate well to party settings, allowing users to stay up later and drink more. Some medications can even produce a “high,” especially if an extended-release capsule is tampered with by its user.

BC’s Alcohol and Drug Policy explicitly prohibits the misuse of prescription drugs, including stimulants, but research has found that prescription stimulants are widely available on college campuses for nonmedical use. For the sake of sating my curiosity and because I couldn’t find any statistics on BC students’ drug use online, I decided to create a short, informal survey to gain a better understanding of students’ experiences with prescription ADHD medication. After sharing it with the Class of 2018 Facebook group, and several GroupMe chats, I was pleasantly surprised to receive 41 responses (which is great, considering that I was competing for participants with all the people who post surveys in class groups to collect data for different research projects).

I must reiterate that this was a very informal Google Forms survey and the answers do not necessarily reflect the greater population of BC, but it was certainly interesting to see the results. While only 20 percent of respondents had ever been prescribed a stimulant drug for an attention deficit disorder, over half had taken one of these drugs despite not having a prescription, with about equal amounts for recreation as for academic purposes.

My results likely overestimate the scope of stimulant medication use. In 2013, researchers at the University of Michigan found 7 percent of students had used stimulant medication medically in the past, and 12.7 percent had used it for nonmedical reasons. But another study found rates of nonmedical use among college students as high as 25 percent. Whatever the statistic, I suspect that it is difficult to tell whether the drugs are abused or used therapeutically.

This brings me to my experience with prescription ADHD drugs. I am currently in the process of weaning myself off of a stimulant medication that I began taking about four years ago, something that isn’t easy to do. At the time I started taking it, I genuinely had difficulty sustaining attention. I definitely still do, but lately I’ve been reconsidering whether it disrupts my ability to function. And I no longer can tell if I am taking the drug because I need it, or because I just want a “boost” to help me study.

Subjective perceptions of attention deficiency make it difficult to determine who actually “needs” these medications. It isn’t that hard to get a prescription, a simple internet search of ADHD symptoms and a willing doctor will get you what you want. I’m not sure how prevalent it is for students to get a prescription without truly having ADHD, nor am I sure how to even get this information from students.

Students want these drugs to help them get by in school, but I was surprised to find that, in another study, nonmedical users of prescription stimulants tended to skip class more, and have significantly lower grade point averages than non-users. This could be due to their increased likelihood of engaging in other drug and alcohol use.

I think so many people are taking these drugs at BC and other universities because the environment is so stressful and everyone is incredibly busy. Seriously, I’m doing like 10 different things all the time (you wouldn’t believe how hard it was for me to sit down and even write this column, and I turned it in a day and a half late). A college can’t explicitly promote the use and misuse of prescription stimulants, but without saying anything, the culture at BC and colleges in general encourages students to be hyper-focused, energetic, and overinvolved. That’s why it’s so popular to take these drugs here and on campuses everywhere.

Think about it: during finals, coffee is free and the library is open for 24 hours. Caffeine is the normal, culturally accepted way to get around your body’s natural energy constraints, but a lot of the withdrawal symptoms for caffeine are similar to symptoms of ADHD medication withdrawal (e.g. fatigue, headache, changes in heart rhythm).

I can’t tell anyone what drugs to consume. I am certainly not a perfect role model, and I’m still not even sure what point I’m trying to make with this article. I’m conflicted. I can’t deny that I get far more work done when I take this prescription stimulant, but I hate being dependent on a pill for motivation, organizing my day around when I’ll consume an extended-release capsule. I caution anyone against viewing ADHD medication as a cure-all for their academic and other problems. I just hope to promote an environment where we don’t have to stay hyper-focused constantly. It’s okay to just chill out sometimes.

academics adderall ritalin
A New Approach in Syria
A Lot of Promise: TU/TD