Home » At MFA, Helguera Explores Wealth in the 19th Century 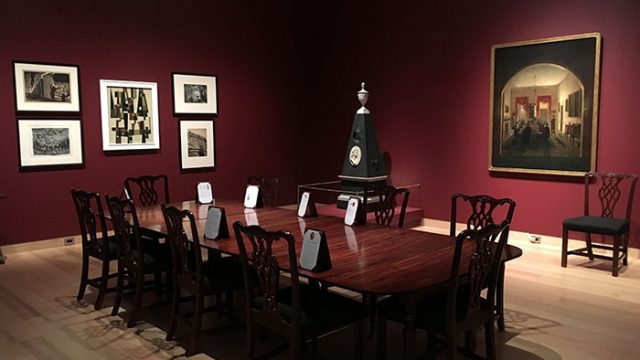 At MFA, Helguera Explores Wealth in the 19th Century

In the 19th century, university clubs and gentlemen’s lounges were popular places where males of high social class could relax and unwind after a day of work to discuss politics and culture. But these clubs were exclusive in the strictest sense of the word, hallmarked by uniformity in both gender and race. In the Museum of Fine Arts’ new Club Americano exhibit, however, New York-based artist and educator Pablo Helguera turns tradition on its head, and welcomes everyone into the lounge—and the conversation—by exploring “historic and contemporary definitions of American identity.”

The exhibit, which opened on April 22, was curated in collaboration with Liz Munsell, the MFA’s assistant curator of contemporary art and special initiatives, and many of her colleagues spanning a multitude of departments.

Club Americano invites people into the small Bernard and Barbara Stern Shapiro Gallery, which is painted a deep burgundy and lit in a way reminiscent of the late evening. Curators decorated the gallery to resemble one of those elite 19th-century institutions, with an ornate, dining table and matching chairs serving as the centerpieces. Placed around the room are comfortable leather chairs and a couch, each with an end table holding information cards about the art that is hanging from the walls.

These pieces include a 20th-century reproduction of Paul Revere’s pewter Sons of Liberty Bowl, juxtaposed with a Mexican stone mask placed inside an ornate cabinet. Also featured are Henry Sargent’s The Dinner Party, which depicts the exact kind of social scene that the room is set up for: a colorful 19th-century Mexican embroidery sample that includes gadgets like a perspective machine, which is a popular 18th-century device that allows users to feel like they are “in” a photograph. If it weren’t for the the informational cards placed on the tables, visitors wouldn’t be wrong to assume they had just stepped into the past.

Each piece reflects the exhibit’s theme, examining what it means to be an American—here meaning it in the broadest sense of the term, and encompassing anyone in North and South America.

A video of Helguera pays tribute to a key function of social clubs: the after-dinner speech. On select Friday nights, there will be performances by various speakers to evoke these after dinner speeches. Each talk will address the objects in the room, and how they relate to the theme of the exhibit. Speakers will range from artists to academics, and will even feature members of the MFA’s Teen Arts Council and Urbano, a nonprofit community art studio based in Jamaica Plain.

The first of these events, entitled “What Is a Club?” took place on Friday. It served as an introduction to the social club idea, and focused on some of the objects featured in the exhibition related to a sense of belonging, while others did just the opposite. The event was hosted by curator Liz Munsell, and featured Benjamín Juárez, a professor at Boston University; Zaira Meneses, Mexico’s premier classical guitarist; Yvette Modestin, a founder of Encuentro Diaspora Afro, an author, poet, and community activist; and Darianna Young, a member of the MFA’s Teen Arts Council.

The next two events, “Worldly and Otherworldly Perspectives” and “Making America,” will take place on May 19 and June 2. Both will examine other pieces in the room, such as the perspective machine, and look at the idea of identity through these various lenses.

According to the MFA’s press release, the Club Americano exhibition hopes to help visitors explore the idea of unity, and how some objects and emotions are meaningful enough to transcend the borders that divide people.

“In a moment where the politics of divisiveness have had such presence in the public discourse, I believe it is important to point out how art and culture are not subject to borders,” Helguera said in the press release. “‘Club Americano’ is meant to be a place where all sorts of borders, be they geographical or socioeconomic, are eliminated.”

Club Americano will run at the Museum of Fine Arts until June 4, 2017, providing visitors with two more months of a fresh perspective on what it means to be American, and how that identity shapes Americans, their actions, and their beliefs. The exhibit invites all to join in the conversation, and bring their own ideas to the table so we can understand where we’re going.

“It is my hope that Bostonians—and beyond—might be able to visit and participate in this experiment of education and curatorial practice,” Helguera said.