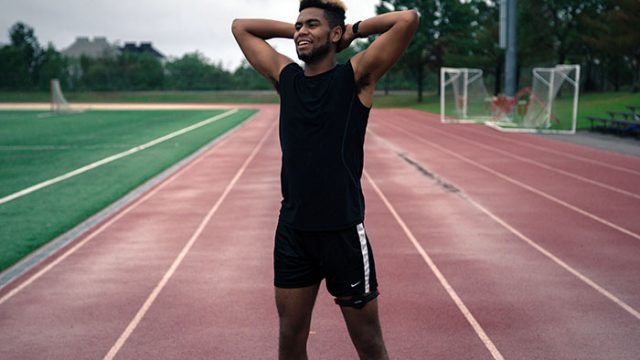 Why is it that people know more about their cars than their own bodies? Baffled by this notion, MIT graduates Alessandro Babini and Daniel Wiese founded Humon, a Boston-based tech startup that empowers athletes and civilians with the body information they need to be their better selves.

Babini, Humon’s co-founder, grew up in France and completed his undergraduate studies in the United Kingdom before moving to Boston. Babini graduated from MIT’s Sloan School of Management in 2015 where he met Wiese. The two founded Humon in 2015, while Babini finished business school and Wiese completed his Ph.D. in Mechanical Engineering.

The company’s name—Humon—comes from an amalgamation of the words “Human Monitor”, and points toward the company’s original direction. Instead of a wearable-tech or fitness startup, Babini and Wiese first bonded over the idea that technology and biology could intersect to help people understand more about their bodies.

“We had no idea where to start, but knew we wanted to create something that could monitor the way the body behaves,” Babini said.

Babini oversees the business side of the startup, and works to keep his team moving forward. Some of his duties include fundraising, marketing, and business development. Wiese handles the technological side, developing innovative software platforms and algorithms for Humon products. Together, the two have created a startup attracting attention and recognition from leaders in the fitness industry.

Boston was the ideal setting for Babini and Wiese to get their startup off the ground. The two leveraged the resources provided by their graduate studies at MIT, and utilized the powerful tech network present in the city. Babini explained that Boston is a great environment for biotech and hardware startups.

“The mentality we have is that we will go wherever to make our company successful,” Babini said. “Today, we think that Boston is where we can make the most progress.”

Last year, Humon began shipping a prototype device to users called the Humon Beta. The device, a small, black hexagonal sensor, was attached to a thin strap securing the device to the user’s leg. Babini and his team then listened to user feedback to build better features that would fit into users’ habits, and help them best train on a daily basis.

Babini explained that he did not just want to sit in a room with his team and decide what athletes needed. It was important to ship devices to customers and get their honest reactions. While the criticisms were harsh at times, Babini was always focused on perfecting the product.

With the prototype, Babini learned that athletes did not have regular access to the high level of information they needed to enhance their training. These athletes only had access to heart rate monitors, which report data that is essentially useless on its own. The data collected and the feedback received from the Humon Beta paved the way for the startup’s flagship device, the Humon Hex.

“We experimented with market research by talking to athletes to understand what their problems were and built a solution for them and with them,” Babini said.

The Humon Hex device measures the way muscles use oxygen. Much like the prototype, the device is comfortably strapped around the quad muscle, and has a battery life of 12 hours. Based on the way the quad muscle uses oxygen during the workout, the user receives a real time insight that allows them to optimize his or her training.

The Humon Hex advises users on how far they can push themselves without exceeding their limits during a workout. The device helps athletes warm up and recover, while giving reliable feedback through a phone or smartwatch. The sensors in the Human Hex seamlessly integrate with the software platform that provides feedback for continuous improvement.

The device gives users information that they can immediately incorporate into their routines. With this insight, Babini suggests that users can make decisions that enable them perform at their best, and be more happy and healthy.

For now, Humon’s main focus is on helping athletes learn faster and train better. This summer, the Humon Hex will begin shipping the device to athletes all around the country.  Babini hopes to help entire teams reach their full potential using the Humon Hex device in the coming months.

“The Humon Hex will give users access to unparalleled information that will help the body work at its best,” Babini said.