O’Malley Hopes Federal Government Will “Catch Up” With Gun Reform

Over 100 students, faculty, and other members of the Boston community joined Massachusetts Attorney General Maura Healey and former governor of Maryland Martin O’Malley, to discuss gun reform on the state level on Tuesday afternoon.

Both Democrats have a history of combatting gun violence. In Maryland, when O’Malley was governor, he implemented measures to try to reduce gun violence through place licensing, fingerprinting, background checks, and required safety training for all gun buyers. Healey has been facing criticism and lawsuits as a result of cracking down on “copycat” assault weapons.

Healey rattled off a list of statistics for context—90 Americans die at the hand of a gun per day, gun violence is the leading cause of death for black men between the ages of 15 and 24. Every year, Healey continued, there are around 30,000 gun deaths compared to about 34,000 deaths from car crashes. The Center for Disease Control spends around $5 million on researching the latter, compared to $100,000 on the former.

Healey attributes the fact that Massachusetts has one of the lowest rates of gun deaths in the country to the strict gun laws within the state.

“We’ve argued for stronger background checks, and have fought for a stricter interpretation on the federal ban on straw purchasing,” Healey said.

Healey has also helped implement a first-of-its-kind training for doctors, making resources regarding gun safety and gun violence available if they need to talk about guns as a risk factor for their patients.

Finally, Healey said, her office has been enforcing laws that are currently on the books in the state of Massachusetts.

O’Malley shared his legacy of gun control in Maryland, which he said had helped facilitate the reduction of violent crime to 35-year lows. Cassidy asked about the Maryland Firearm Safety Act of 2013.

“It’s my belief that as we progress as a people, the federal government will also catch up one day, and start playing a role here.”

The Firearm Safety Act prohibited, with exceptions, the possession and sale of combat assault weapons in Maryland, as well as transporting them into the state. Reminiscing on getting the bill passed, O’Malley told the crowd that the bill did not receive a single Republican vote and even struggled to rally some Democratic votes.

Shifting to the national stage, O’Malley spoke on the platform that he ran on in the 2016 presidential election.

“Secretary Clinton and Senator Sanders had not the same consistency of position on this that I had, nor had they accomplished things in office as I had been able to accomplish,” O’Malley said. “And I was glad to see them both come around to what I believe is a broad majority opinion within the democratic party when it comes to common sense gun safety legislation.”

Most notably, he proposed requiring microstamping, a ballistics identification technology. Microstamping essentially links any bullet to the gun it was shot from by using a laser that engraves microscopic markings onto the tip of the firing pin, and onto the breech face of a firearm.

When a gun is shot, the etchings will transfer to the primer and the cartridge case head. If police recover the case of the bullet, the markings on the cartridges can help them trace the firearm back to its last registered owner.

The technology is required by law in California, and as a result, however, two large gun manufacturing companies have said they will no longer sell in California, citing the microstamping law as the reason.

“Everything should be on the table,” Healey said.

O’Malley said that he is pleased with the focus on gun control that the Democratic Party has as a whole, but wishes the federal government would step up on the issue.

“It’s a shame that we allowed the Assault Weapons Ban even to lapse, but we did, and now I think they’re going to see different leapers of action—state by state, court cases, courageous attorney generals—stepping forward and doing what needs to be done,” O’Malley said.

The Federal Assault Weapons Ban was enacted in 1994, and expired in 2004. The 10-year ban included the prohibition on the manufacture of certain semi-automatic firearms that it defined as assault weapons for civilian use. There were multiple attempts to renew the ban, but all were unsuccessful.

Cassidy also brought into question whether or not the left underestimates the strength of interest in lawful gun ownership in rural America. O’Malley and Healey had varying answers for, seemingly, the first time throughout the event.

O’Malley conceded that sometimes the left fails to recognize the cultural importance of guns, specifically, the rural hunting tradition.

“The danger is to talk past each other and not acknowledging where people are coming from,” O’Malley said. “I think that’s the real danger—talking past people or vilifying our opponents who may have a disagreement with us about it.”Healey responded more cynically, reminding the audience of the role the National Rifle Association and moneyed interests play in dividing the nation on the topic of guns. She believes that there is a common ground, but it seems far from reach given the politics and the processes in place.

Healey then cited the Second Amendment, which reads “a well regulated Militia, being necessary to the security of a free State, the right of the people to keep and bear Arms, shall not be infringed.” She stated that “well regulated” means something, not no regulation.“There have always been lines in this space. That’s why we can’t bury grenades and in our property or walk around with them,” Healey said. “So don’t tell me that this is about hunting, and don’t tell me this is about sport. This is about a particular agenda and interest that I don’t think has the interest of true sportsmen and hunters in mind.”

Healey made it clear that the issue is about gun violence, not taking away the ability for people to hunt or learn to shoot.

“It’s my belief that as we progress as a people, the federal government will also catch up one day, and start playing a role here,” O’Malley said. 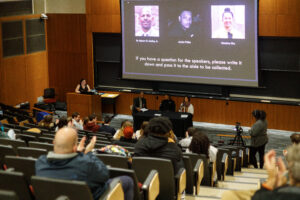