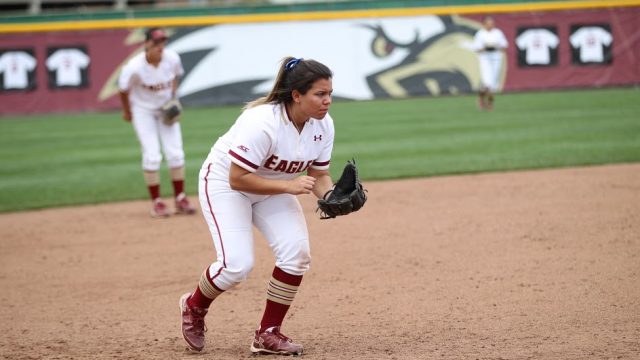 In the fourth inning, the Wolfpack led 6-1—but they wouldn’t find home plate again. Meanwhile, a couple of timely home runs from Cortez cut into the lead and then gave the Eagles the win with a walk off to ensure a 7-6 victory in a game meant to honor both the program’s seniors and local police departments.

NC State (17-34, 10-11 Atlantic Coast) opened up scoring in the second inning. Haylee Kobziak reached base thanks to an error—an error that would come back to haunt the Eagles (29-19, 13-7) later. Cheyenne Balzer hit a bomb to left field, giving the Wolfpack a quick 2-0 lead.

Lexi DiEmmanuele halved the Wolfpack’s lead in the bottom of the second. She hit a leadoff triple to center field, taking off for home when Allyson Moore, up next, hit a sacrifice fly to deep center. After surrendering the early runs, BC looked back in the game.

In the third and fourth, however, NC State cushioned its lead, and the game began to look out of reach. In the third, Tyler Ross and Jade Caraway walked and singled, respectively, putting two runners on base. They each advanced one base, to third and second, thanks to a sacrifice bunt from Molly Hutchison, and they each scored when Alyssa Compton doubled. Heading into the fourth, the Wolfack led the Eagles 4-1.

Balzer singled to reach base, and then Geena Autry pinch-ran for her. Molly Martin laid down a bunt, but successfully reached first thanks to an error. Ross singled to center field, allowing Autry to score and Martin to reach second. Martin was next to score, however, when Caraway drove her in with a single. By the time BC escaped the top of the fourth, it trailed 6-1.

The Eagles steal just one run back in the bottom of the fourth. DiEmmanuele singled, stole second, advanced to third, and took off for home when teammate Brenna Griesser was caught stealing.

It was the fifth when Cortez stepped up and hit her first bomb of the day. Annie Murphy singled, putting a runner on base when Cortez stepped into the box. She hit a homer to center field, driving in two runs and cutting into NC State’s lead. Immediately after, Jordan Chimento hit a solo shot to center. Suddenly, after trailing by as many as five runs, BC was down just one, losing 6-5.

But Cortez wasn’t done hitting bombs in the game, and her second two-run shot was considerably more exciting—it resulted in a walk-off victory for the Eagles. In the bottom of the seventh, still trailing by one run, BC put a runner on base after Chloe Sharabba singled. Cortez stepped into the box, watched a couple of pitches, and then rode one out for the game-winning two-run homer.