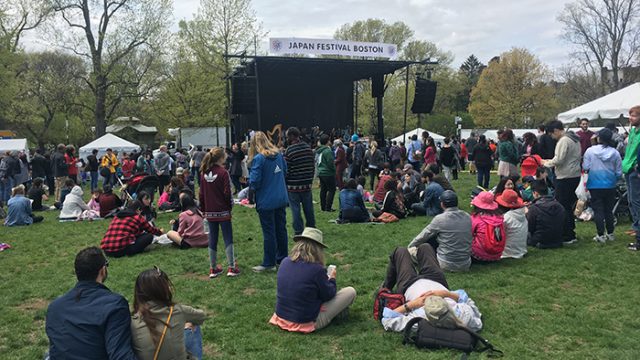 This past weekend, despite the dreary and cloudy weather, thousands of Boston locals flocked to Boston Common on Sunday for the annual Japanese Festival. It was free to anyone interested.

Visitors, some dressed as anime characters, overtook the usual calm of the park as they bounced among the hundreds of booths that the festival boasted. Two stages on either side of the festival featured Japanese music, contests, and auctions.

Now in its sixth year, the Japanese Festival in Boston began in 2012 in response to the 100th anniversary of Seattle’s Cherry Blossom and Japanese Cultural Festival. Previously held in Copley Square, the location of the festival moved to Boston Common last year when the festival attracted over 60,000 attendees—almost double than it had the year before.

“The operation of the festival is both unique and challenging because it is put on by a 100 percent volunteer effort, using no professional advertising or marketing companies either,” explained Keiko Isomura, one of the volunteers who deals mainly with the public relations aspects of the festival and also helps to coordinate the vendor booths.

A central group of 30 volunteers is devoted to the planning and execution of the event, and also double as the individuals who handle the bigger logistics of the festival. The total volunteer pool has increased from 200 to 400 people in the last year alone.

But operating on a volunteer-only basis does have its challenges, Isomura explained. Since most volunteers have jobs, no one solely focuses on the festival, and planning takes a backseat to daily life. Getting all the volunteers in the same place at the same time is no easy feat.

Those visiting the festival had the chance to interact with various aspects of Japanese culture by not only seeing, but also by touching, feeling, and tasting the culture. Booths featured Japanese arts and crafts, businesses, education, culture and life, food, and sports—providing an opportunity for visitors to immerse themselves in a little bit of everything. Various workshops offered a more hands-on approach where attendees had the opportunity learn art forms like origami paper folding.

According to Isomura, the festival’s ability to share these unique qualities is what makes it essential to the Boston community.

“The goal of the festival is to share Japanese culture with our local community and to give back our appreciation to them,” Isomura said. “It is a continuous process of the sharing of ideas and culture.”

The festival’s importance, however, does not mean that organizers are exempt from challenges. This year, challenges took the form of the number of food vendors.

“Last year there was a lot of backlash with the food booths because people were waiting in ridiculously long lines for food or in some cases were not able to eat at all,” Isomura said. “We hoped that the increased number of food vendors this year will help fix the problem.”

Another option available to those attendees who hoped to avoid long food lines, was the availability of a “fast-pass” that allowed people to skip lines if they donated $30 or more to the festival.

One of the biggest attractions of the festival was the Omikoshi, a portable Shinto shrine for thankfulness and celebration of the community. In the afternoon, the shrine was carried around the park in its demonstration of thankfulness. Isomura shared that in the near future, the festival committee is working closely with Harvard and MIT to upgrade the shrine to feature some technological aspects.

When visitors got tired and wanted to take a break, many chose to sit on the lawn in front of the stages to catch a glimpse of what was going on there. The first stage featured live Japanese musical performances, dances, and samurai demonstration. The second stage displayed “family-friendly” acts such as kid’s dance, cartoon music, and anime contests where prizes were distributed to the best dressed. No matter which stage you were viewing, both attempted to blend old and new Japanese culture, so that the community could show how smoothly they melded.

An entire year’s worth of work and effort on the volunteers’ part culminates into this one day, as they create innovative ways to share Japanese culture. While the festival continues to grow and gain more traction in the community, Isomura shared that organizers hope to attract more locals in the New England area outside of the Japanese population already involved.

“It is all about the continuous sharing of culture and creating a more connected community in the end,” Isomura said. 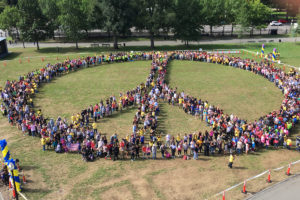