Home » ‘Guardians of the Galaxy Vol. 2’ Amps Up Humor in Tried, True Formula 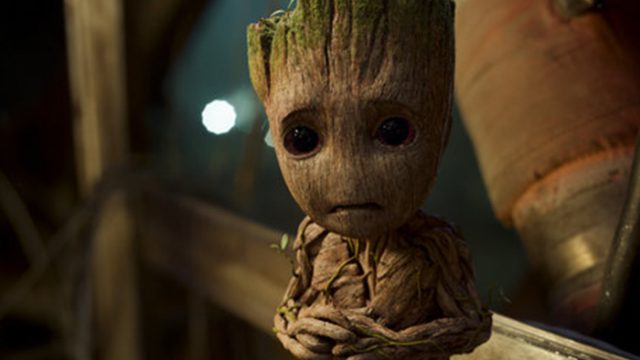 ‘Guardians of the Galaxy Vol. 2’ Amps Up Humor in Tried, True Formula

Guardians of the Galaxy Vol. 2 is just as one would expect—a light-hearted action/comedy superhero movie with amazing visual effects and tons of inappropriate humor. Though some might criticize it  for falling into Marvel’s now tired formula, the film actually takes expectations and elevates them to a new level, without necessarily breaking new ground. Genre-conforming boundaries were already broken by this film’s predecessor, while Vol. 2 explores where the new boundaries lie, somewhere at the edge of the galaxy.

In Vol. 2, Guardians of the Galaxy are hired by an alien race, the Sovereigns, to protect important batteries from an invader. When the job is done, Rocket Racoon (Bradley Cooper) steals some of these batteries, leading the Sovereigns to set out to recover their property and inflict punishment on the Guardians. While evading the Sovereigns in pursuit, the Guardians try to escape and are helped by a mysterious entity. For many characters, such as Peter Quill (Chris Pratt) and Gamora (Zoe Zaldana), though their troubles seem behind, demons from their past continue to loom menacingly ahead. The Guardians are placed in dire circumstances, risky intergalactic travel, and left answering to Quill’s own family.

The plot of Vol. 2 was not perfect. It followed much the same Marvel structure seen in the first and was rather predictable as a result. The Sovereigns served little purpose, other than reintroducing us to The Guardians and distract from the plot. It is possible that they served as some sort of commentary on the issue of the search for perfection, but the film never explored these social issues. Even when the film tried to touch on more serious issues, it only gently scratches the surface. During one scene, the film attempts to comment on heavier issues such as drones and prostitution, but, not wanting to lose the lighter tone, they were largely brushed over, making their mere mention feel superfluous. It would have been better for flow had these commentaries not been attempted at all.

What the films lacks in story, it makes up for in humor. The self-aware style was an expected, albeit necessary, carry over from the first film. There are some corny moments and the movie almost always makes an effort to poke fun at itself. The quality of the  humor overall was substantially better than in the first installment, as much of the introductory character humor of the first could give way to more substantive jokes. Though not at the level of Deadpool, the film’s humor stems from its crudeness—an intelligent (or as intelligent as possible) dissertation on poop and bodily fluid. It will be difficult for fans to determine if it’s an action film with comedy or a comedy film with action.

When it comes to action, the film mixed in visuals in a breathtaking way. Every fight sequence (whether in space or in a planet) was beautiful. Vol. 2 is filled with vivid colors and sceneries, and the camera is always looking for the best way to showcase the scenery or the action at hand. It sometimes runs the risk of looking like Starbucks’ new Unicorn Frappuccino, but it never gets to that point. If given the chance to see Vol. 2 in 3D, consider spending the extra $5. For this film, 3D adds to the experience and elevates the visuals in magnificent ways.

The characters were well developed, especially the secondary ones. There are some quick character explorations that were unexpected and the relationships and motivations seemed genuine. This is in great part to both the writing and the acting. Pratt embodies the brash Starlord. Cooper, though just a voice, solidified emotions through his voice. Even Kurt Russell, as Ego, Quill’s father, had depth and relatability, even as an ancient cosmic being.

For those looking for a fun way to spend an evening and start the summer, do not miss Vol. 2. It is not too shallow, but not too deep. Just like the galaxy itself, there is much to be found in the various corners of this film. It isn’t perfect, but it is a whole lot of fun.