Home » Eagles Steal One Game From No. 17 Demon Deacons 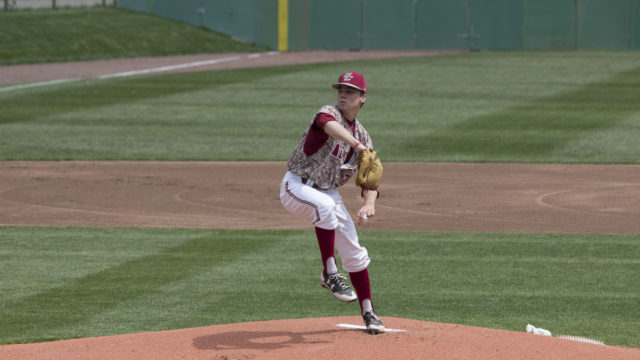 Eagles Steal One Game From No. 17 Demon Deacons

You never know what to expect from Boston College baseball’s starting pitching. One day, a pitcher will shut down one of the nation’s best ball clubs. A week later, and that same guy could very well see his earned run average gravitate back toward the staff’s equilibrium—a dismal 4.86. On Sunday, that guy was Brian Rapp.

In the two games prior to the series finale at Wake Forest, Rapp looked better than he had all season. Against North Carolina State, the junior tossed a complete game shutout. It was the Eagles’ first shutout since Mike King’s on April 17, 2015, and it was Rapp’s first victory of the year. In his next start, he picked up another. Rapp held Miami—a team that had scored a combined 17 runs in the first two games of the series—to just four hits and two runs in seven innings of work.

But Rapp’s winning ways came to a screeching halt on Sunday. While he didn’t completely collapse like he did versus North Carolina earlier in the year, the Mendham, N.J. native never really got in a rhythm. Rapp gave up eight hits and allowed at least one run in four out of the six innings he pitched. The BC bats didn’t have any better luck, and the Demon Deacons took Game Three and the series with a 5-2 win.

Both sides were held hitless in the first frame. The first legitimate scoring chance came in the top of the second. Leading off, Gian Martellini singled through the left side. Then, down in the count, Jake Alu recorded another single. Moments later, Jacob Yish was hit by a pitch, loading the bases. With no outs and three men on, it looked as if the Eagles (19-26, 8-19 Atlantic Coast) were guaranteed at least one run out of the inning. But No. 17 Wake Forest’s Connor Johnstone (32-14, 15-9) got out of the jam, retiring the next three batters.

From that point forward, Johnstone was smooth sailing. In fact, he wouldn’t give up another hit until the seventh inning.

You couldn’t say the same for Rapp. In the bottom half of the second, the Demon Deacons already got on the board. With two outs, Johnny Aiello singled up the middle to keep the inning alive. Shortly after that, Rapp misfired, allowing Aiello to scamper to second. Rapp continued to miss the zone and walked Bruce Steel. Thanks to a double steal and a Jake Palomaki throwing error, Aiello was able to cross the plate for Wake Forest’s first run of the game.

Two frames later, and the scoring resumed. Jonathan Pryor took the first pitch he saw to deep center field. The solo shot doubled the Demon Deacons’ lead, but they weren’t done yet. Stuart Fairchild kept things going with single to left field. Not too long after that, Ben Breazeale double to left center, scoring Fairchild.

Fairchild brought in a run of his own in the fifth inning. After Jake Mueller doubled down the right-field line, Fairchild singled to center. Mueller rounded third and made his way home on the play.

Down four runs, BC mustered a little rally in the seventh. Before Johnstone was pulled, he walked Johnny Adams and Palomaki. Johnstone’s replacement—Colin Peluse—wasn’t much better. All he needed was one more out to end the inning, but he couldn’t even pitch a strike. One ball even got by Breazeale. The Demon Deacon catcher scooped it up and attempted to nail Adams at third. But Breazeale’s throw missed the mark, and Adams made his way home.

To make matters worse, Peluse proceeded to walk Donovan Casey. And just like that, the righty’s day was over. He was replaced by Griffin Roberts, who eventually closed out the inning. But only after he gave up a single to Michael Strem and hit Martellini with a pitch—both of which led to Palomaki scoring. Still, the Eagles trailed by two.

Wake Forest tacked on one final run in the bottom half of the frame, and would hold onto a three-run lead for the remainder of the contest.

BC won its only game of the series on Saturday. But it didn’t just win, it dominated. From the first inning on, Dan Metzdorf and the Eagles offense outplayed the Demon Deacons.

Right off the bat, BC got off to a two-run lead. Palomaki drew a walk to start things off. Soon after, Casey singled through the right side. Both of them advanced to second and third, respectively, following a wild pitch. Then, despite grounding out, Strem drove in Palomaki for the game’s first run. A few batters later, Jake Alu singled toward the second base side, scoring Casey.

Metzdorf pitched a strong six innings. The sophomore only allowed four hits and fanned five batters. It was after his final frame that BC showcased its best offense of the day. With the bases loaded and his team already up 3-0, Mitch Bigras ripped a double to right center, scoring Strem, Martellini, and Alu.

John Witkowski and Casey took it from there. Combined, the two only conceded one Demon Deacon hit. And as if six runs wasn’t enough, the Eagles added two more in the eighth. The score didn’t budge in the final frame. BC’s 8-0 victory marked its second shutout in two weeks.

Saturday was an anomaly. Just like in the series finale, Wake Forest’s offense controlled Friday’s game.

Even though the Eagles got off to a remarkable start—two singles and a Strem three-run homer—it didn’t take long for the Demon Deacons to put on a more impressive act.

In the second inning, Wake Forest rattled off six runs against BC’s ace, Jacob Stevens. The first one came via small ball, but the rest were byproducts of a hitting marathon. The Demon Deacons recorded eight hits in the inning—two shy of the Eagles’ game total. With two outs, six-straight batters reached base—five of which hit singles. Because of the rally, Wake Forest batted through its entire lineup in the inning.

The scoring just kept on coming. The Demon Deacons scored two more in the fourth and another four in fifth. Gavin Sheets headlined the surge with a two-run shot to right center.

Trailing by nine, BC strung together three-consecutive hits in the top of the seventh to tack on a pair of runs. But it was way too little, way too late.

If the contest wasn’t already out of reach, it was following the eighth inning. Immediately after Breazeale scored on a wild pitch, Keegan Maronpot launched a two-run bomb to left field. By the end of the inning, and eventually the game, the Demon Deacons held a 10-run advantage (15-5) over BC.

Since head coach Mike Gambino’s group stole one game against Wake Forest, BC remains very much alive in the chase for the final spot in the ACC Tournament. It’ll all come down to the matchup against Notre Dame—a series that Gambino and Co. will have to win, or maybe even sweep.