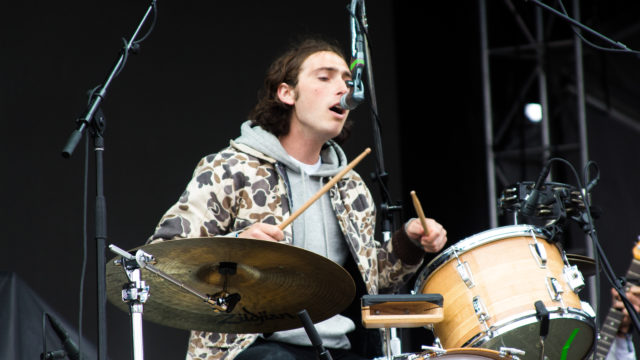 Saying goodbye to the concrete jungle of City Hall Plaza, Boston Calling was reborn this year, not from ashes, but from mud and rain. At the Harvard Athletic Complex, Friday’s events merged to form a stellar opening to a festival that will welcome over 30,000 people this weekend. Complete with swaths of open space, a ferris wheel, comedy show, and a proper third stage, Boston Calling sets itself up as a concert contender in the East. Harvard has always been known as a holy grail of academia. With this rebirth of Boston Calling on its grounds, its music festivities might also achieve such renown.

This year, festival goers have much more space available to take advantage of. The third Delta Blue stage is considerably farther away from the other two, which helps the festival regulate itself more seamlessly than in years past. The addition of the third stage allows for more performers, less audible clashes, and dispersal of festival goers throughout the grounds instead of elsewhere in the city. Though the landscape had changed, the ultimate goal was to elevate the talents of the artists. With this new locale, Boston Calling’s performers did just that.

Between the occasional sprinkle of rain, local rock band Vundabar opened the show with thorough guitar shredding and sarcasm on part of front man Brandon Hagen. Engaging the crowd through a lyrics that spanned from spoken poetry to screeches and falsettos, Hagen used a variety of compelling lyrics to compliment the always rampant guitar progressions. For local bands like Vundabar, Boston Calling offers an opportunity to be seen by a wider audience, even in their own backyard.

Later, Chicago-based Whitney brought a little sunshine to listeners during its sunshower set. Whitney felt out the crowd perfectly. Drummer and lead singer Julien Ehrlich said that the band created the setlist on stage organically. Its opening with “Dave’s Song,” masterfully married the setting and song. The bittersweet scene of sunrays and rain coupled the song’s wistful remembrances of relationships past articulated the concurrent feelings of awe and melancholy in the rain.

Changing up the vibe with “Polly” and again with “Golden Days,” Whitney gave a performance that touched upon all the major themes of its debut album, Light Upon the Water. Signature trumpet solos and licks gave flavor to the wet air of the festival. Ehrlich’s vocals live adopted a striking similarity to Shannon Hoon of Blind Melon, while remaining perceptible unique. Finishing with “No Woman,” Whitney grooved off stage, taking the rain with it.

The one-man band Francis and the Lights took the stage next in dramatic fashion, with sole member Francis Starlite spinning across the length of the stage to the opening bass notes of “See Her Out (That’s Just Life).” He bounced between a keyboard tucked off to the left of the stage and the standing microphone in the center. Performing against a totally black backdrop, Francis had all eyes on him and entertained with wild dance moves that had the crowd cheering. He kept up the energy with songs such as “It’s Alright to Cry,” “Friends,” and “I Want You to Shake.”

During Francis and the Lights set, the soloist was joined by Chance the Rapper, who surprised the audience with an appearance during “May I Have This Dance.” The two artists danced alongside each other in sync, falling into Francis’ somewhat odd choreography until the finish of the song. As Chance was making his way offstage, Francis called him out claiming, “I have something for you,” before jumping up and landing in a contortionist split for the finale of his act.

“If you want to see something depressing, look down at your shoes.”

Phrases like this could be heard all around during the Migos set. As “One Time” and “Bad and Boujee” raged on rampant jumping and crowd swelling pulverized the ground into a soup. As Offset demanded of the crowd their loudest MI-GOS chant, the crowd obliged sending the masses into a sea of flailing arms and gyrating bodies. Certainly, the Migos set was the rowdiest of the broad daylight sets, as the groups enticing energy saw fans flock the the Green Stage throughout. The overall crowd work was impeccable and achieved its stated goal of riling up the crowd.

Performances from the likes of Deerhoof, Mac Demarco, and Bon Iver coalesced to form a surf of audible joys to wade into on the damp summer’s day.

The comedy portion seemed to encounter some problems. Host Hannibal Buress did not appear or host the show, leaving comedian Kelly MacFarlane the hosting duties. Despite this host hiccup, all other performers gave the absolutely packed Bright-Landry Hockey Center something to revel in.

Boston native Lamont Price stuck to mostly hometown stock as he professed an undying love of Tom Brady and the Patriots. This love extended to unprecedented levels as Price said emphatically, he loves Brady, endearingly calling him Tommy throughout. Furthering the point, Price asked the audience if any of them had pleasured themselves to and interception before, in reference to the Malcolm Butler catch in Super Bowl 49.

Lexington native Eugene Mirman, famous for his voice-work as Eugene Belcher on Bob’s Burgers, gave a slew of jokes ranging in brevity and content. From irreverent neighbors in France, the depths of human ignorance, and “digital drugs” Mirman touched human plight with his unique brand of humor.

Pete Holmes, also a Lexington native and of the recent HBO series Crashing, closed out the show in his emphatic quirky fashion. Sporting an exaggerated Boston accent for most of his set, Holmes spoke of his veganism, his father’s hard of hearing, and the intensity of Bostonians.

Overall this first comedy portion set off without a hitch and is a much better fit for the festival than a film experience. That being said, the combination of inebriation and flippant patronage could spell disaster for an event like this. For Friday, the wet weather certainly aided in elevating the events. Though Holmes was the only comedian to exchange some words with a few audience members, the overall show was a success, sans Buress.

Without question, Boston Calling is looking to become the Coachella, Bonnaroo, or equivalent of the Northeast. With additions such as this, the festivities are rounding out retention as festival goers have enough space to catch their breath before reintegrating into the masses of fervent fans.

Next to the ferris wheel, there is an obelisk in the center of one of the open areas of the festival. In many ways, it represents the growth of the festival, as it reaches for the stars. From the harsh concrete to the soft fields of grass, Boston Calling has evolved. Though the transition was a little dirty, in literal ways, that may just be what concert goers want. Something dirty. Something raw. Something real.