O’Brien, Bell, and Clemmensen Headline Newest Members of BC Hall of Fame

For the second year in a row, nine former Eagles will be inducted into the Boston College Varsity Club Hall of Fame.

Bell is the Eagles’ all-time leading scorer and a two-time All-American. The point guard notched 2,632 points during his collegiate career and was named Big East Player of the Year in both 2001 and 2003. In his senior season, Bell averaged 25.2 points per game—the best in the Big East. Even more impressive, he put up 27.8 points per game in conference play, which set the Big East single season record. To this day, no BC player has scored more points in one season or made more 3-pointers or free throws than Bell.

Clemmensen held down the fort as BC’s starting goaltender for four-straight seasons—each of which culminated in a run to the Frozen Four. When all was said and done, he finished his collegiate career with a program-best 99 wins, and most importantly a National title (2001). Clemmensen is currently third on the all-time save list with 3,234 and owns the BC record for most career wins (10) and saves (356) in the NCAA Tournament. In 1997, the netminder was drafted by the New Jersey Devils. He went on to play 13 years in the NHL.

Guerin only spent two seasons on the Heights, but judging by his numbers, you wouldn’t be able to tell. He recorded 40 goals and 30 assists while at BC. The Wilbraham, Mass. native was a part of both the 1989-90 team that booked a ticket to the Frozen Four and the 1990-91 group that repeated as Hockey East champions and returned to the NCAA Tournament. After his sophomore year, Guerin began an 18-year NHL career, in which he won two Stanley Cups. Now, he is the assistant general manager of the Pittsburgh Penguins and the general manager of their AHL affiliate, the Wilkes-Barre/Scranton Penguins.

Koppen offered consistency at the center position as a three-year starter for O’Brien’s Eagles. He earned All-Big East honors in each of his final three seasons and was a 2002 finalist for the Rimington Trophy—the annual award presented to the top center in college football. Following graduation, he posted a 10-year NFL career with the New England Patriots and Denver Broncos. Koppen won two Super Bowls with New England and was later named to the Patriots’ All-Decade (2000s) team.

O’Brien is the winningest head coach in BC football history. He took over a five-win team in 1997 and, within a few years, constructed a nationally competitive program—one that played in eight-consecutive bowl games. O’Brien finished his tenure with the Eagles with a record of 75-45. Four of his teams finished in the top-20, and 26 of his players were drafted by the NFL.

Storz put together a monster 1997 season at outside linebacker. The Rockaway, N.J. native tallied 13 sacks—which tied BC’s single-season record at the time and was good for eighth in the nation—and 40 tackles. Because of his exemplary senior campaign, Storz received the William J. Flynn Award—an accolade given to the team’s most valuable player. He also earned All-Big East honors and the Bulger Lowe Award for the most outstanding player in New England. Today, Storz still ranks fourth all-time in the BC record books with 19 career sacks.

Woronicz started his career with the Eagles back in 1937, when he played defensive end for a then-undefeated freshman team. But a serious knee injury sidelined him, and eventually forced him to take some time off from the game. Eventually, Woronicz returned to the program and became a pivotal player for the renowned 1940 team. He played both sides of the ball, and not only helped the Eagles defeat Tennessee in the Sugar Bowl, but also earned All-New England honors.

Antos Mikkelson was partially responsible for the women’s ice hockey team’s jump to Division I. Before the team attained varsity status, she led BC’s club ice hockey team to AWHCA National Club Championship titles in both 1992 and 1993. Then, when the program finally upgraded to the Division I level for the 1994-95 season, Antos Mikkelson logged 27 goals and 25 assists and became the first player in program history to be named ECAC Player of the Week.

McLane is BC’s all-time leading goal scorer, and only his brother, Kevin, recorded more points in an Eagles’ uniform than him. A four year starter, McLane increased his production each year he took the field. By his senior year, he was scoring 40-plus goals and tacking on 10 assists. He became the second player in program history to earn an invitation to the North South All-American All-Star game.

The inductees will be honored on Oct. 6 in Lyons Hall’s Welch Dining Room and on Oct. 7 during halftime of the Eagles’ football game against Virginia Tech. 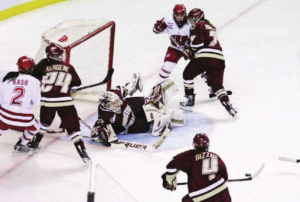