Boston College football scrimmaged for the third time this summer on Friday. But unlike the last two weeks, the exhibition didn’t go quite according to plan, per BCEagles.com.

Just like he did last week, head coach Steve Addazio hinted at his gameplan the day before the scrimmage. He said that the first unit would take fewer snaps than it had in the second scrimmage, citing its fatigue and the proximity to the regular season. But the starters ended up playing 69 snaps—four more than the week before.

Due to impending inclement weather, Addazio was forced to reschedule the scrimmage. In order to evade the incoming storm, Addazio reset the game time from 6 p.m. to 7 a.m.

Right from the get-go, the time shift was reportedly noticeable. The Eagles started off slow, going three-and-out on their opening drive.

The next time out, the offense responded. Led by redshirt freshman quarterback Anthony Brown, BC marched down the field for a touchdown. Along the way, Brown connected with the team’s top two tight ends—junior Tommy Sweeney and sophomore Korab Idrizi. On the ground, both junior Jonathan Hilliman and freshman A.J. Dillon ripped off a couple big gains to balance the offensive attack. The drive culminated in a 21-yard touchdown pass to Hilliman.

Yet the offensive prowess didn’t last for long.

According to the practice reports, the Eagles committed several penalties and dropped a handful of passes. To top that off, the quarterbacks combined for four interceptions on the day—one of which senior cornerback Kamrin Moore took to the house.

But after halftime, the offense got back on track. Hilliman capped off a short drive with a hard-nosed rushing touchdown to regain momentum. Shortly after that, freshman quarterback E.J. Perry hit redshirt freshman Kobay White for a 10-yard touchdown. And later on, Brown found junior wideout Michael Walker for a 60-yard score.

All three placekickers—Mike Knoll, Colton Lichtenberg, and Maximilian Schulze-Geisthovel—kept themselves in the race for the starting job. They combined to convert on all eight of the team’s field goal attempts. Lichtenberg led the way with four field goals, including a long of 45. 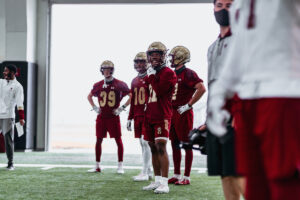