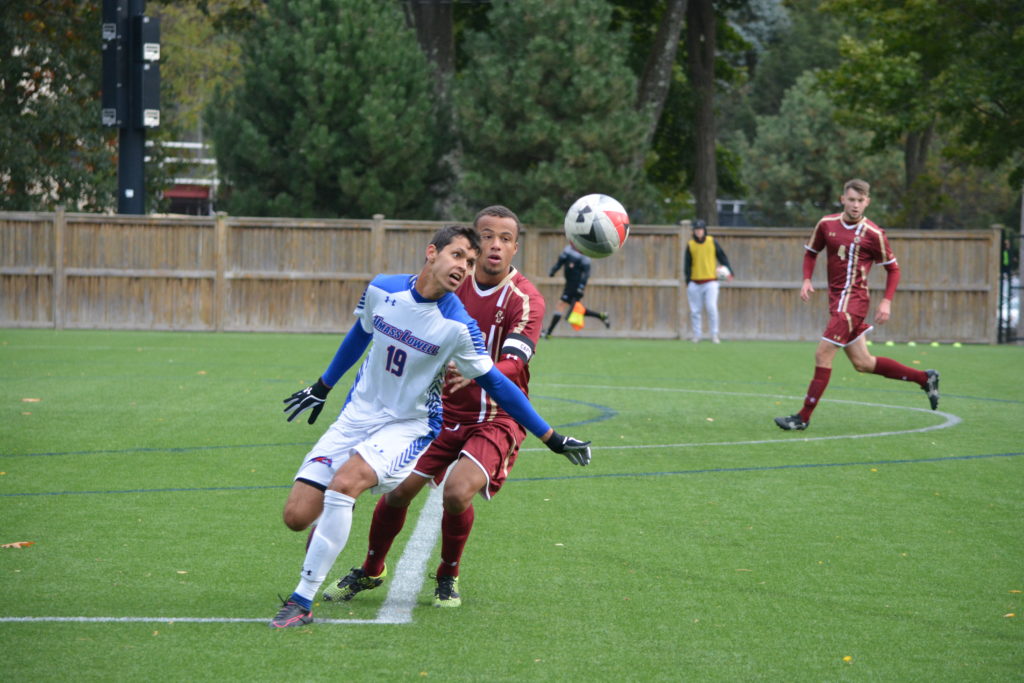 After two preseason matches, Boston College men’s soccer has yet to score its first goal of 2017. Following the Eagles’ 4-0 loss to the USL’s New York Red Bulls II earlier in the week, head coach Ed Kelly’s group failed to sneak one past No. 18 Massachusetts Lowell on Saturday.

That being said, the River Hawks didn’t have much luck either. The teams combined for a total of five shots, and the friendly ended in a 0-0 draw.

While much of the game was played in between the 18s, both teams did have a few opportunities to get on the board. In the first half, UMass Lowell’s best chance of scoring came on a pair of free kicks. Ten minutes into the match, Alejandro Osorio teed up a shot, but BC’s goaltender Cedric Saladin, was there for the stop. Then, right before halftime, Joe Kellett took another free kick, but Saladin once again made the save.

The Eagles’ offense ran through junior Simon Enstrom. Close to the 25-minute mark, freshman Beto Luna split two River Hawk defenders and located Enstrom right by the post. The Swedish forward took the feed and whipped up a shot, but UMass Lowell goalie Austin Kroll saved it. Nearing the break, Enstrom flicked a Luna free kick across the box, but before it could even reach the net, the ball was cleared.

For the most part, BC controlled the second half. The Eagles had a few more looks on goal, but none was more promising than Enstrom’s late-game strike. From 12-yards out, Enstrom wound up for another shot on net. But he put too much on the ball, and as a result, it nailed the crossbar.

BC finished the game with three shots—one more than the River Hawks.

Kelly noted that, due to the blistering heat, he was forced to make more substitutions than he would have liked. And in turn, the flow of the game was disrupted. But all in all, he saw Saturday as good preparation for BC’s regular season opener against Quinnipiac.

“With Red Bulls II and Lowell, they’re tough opponents to get us ready for the season,” Kelly told BCEagles.com. “We’re looking forward to Friday now.”