There are few scenes in Boston more picturesque than the Frog Pond in the Common. It’s not just the tranquil patch of blue in the heart of a city surrounded by “Dirty Water” that makes the area special. It’s the couples strolling the pathways, the families picnicking out on the grass, and the children getting their first magical ride on a famous swan boat.

On a warm, bright Saturday morning, the regular laughter and chatter of community were replaced by an eerie silence. In the wake of Mayor Martin J. Walsh’s, WCAS ‘09, call for people to stay away from the Common in anticipation of the “Free Speech Rally” occurring on the other side of Charles Street, there were few young children, no street vendors, and no swan boats on this sunny summer day.

In their place, tens of thousands marched in the streets and rallied around the Common in opposition to the “Free Speech Rally” this afternoon. The rally was self-billed as a defense of the “basic human right” of freedom of speech and an opposition to all censorship. The event had drawn widespread media attention and criticism in large part due to its proximity to the deadly “Unite the Right” white supremacist rally in Charlottesville, Va. on Aug. 12. The Boston rally drew only about 100 participants, and ended more than an hour earlier than scheduled.

At about 12:45 p.m.—45 minutes after the rally went as supposed to begin—the few dozen protesters who had managed to make their way past a far larger crowd of surrounding counter-protesters through a security checkpoint of Boston Police and onto the Common’s Parkman Bandstand, exited in a line from their barricaded zone and out toward Arlington. They were escorted by police as counter-protesters swarmed around them and chanted for them to keep walking away.

Protestors exit amid a swarm of surrounding counter protestors and applause pic.twitter.com/eCDJPIy5IU

Amid such a large opposition crowd, it was unclear if there were any speeches or chants from the protesters, who were isolated both by multiple lines of barricades and by a few dozen yards of empty space.

Boston Police commissioned a high concentration of officers to prepare and secure the area surrounding the Bandstand, in the hopes of separating the two sides and preventing any incident similar to Charlottesville. The Boston Free Speech Coalition, the organizers of the event, denied affiliation with that rally.

Though Walsh had noted the rally would be promptly shut down if violence became an issue, most people in attendance dispersed on their own. BPD declared the “Free Speech Rally” over at 1:30 p.m. via Twitter, saying demonstrators had left the Common. Between 3 and 4 p.m., @BostonPolice in one tweet asked the public to “…refrain from throwing urine, bottles and other harmful projectiles at our officers,” and later confirmed in another tweet that rocks were being thrown at police.

Police Commissioner William Evans said BPD had made at least 27 arrests, and no one was hurt or killed.

While this violence occurred after the main pack of original protesters had presumably left, several individual “Free Speech” protesters did come in contact with crowds of counter-protesters, who yelled, swore, and chanted at them, often calling the individuals “Nazis” and urging them to leave the space.

“[We’re] basically just saying, they’re outnumbered, we’re the majority, and they’re not going to win this,” said Laura Venters, a counter-protester from Boston. “I think it’s also important for them to realize that just because their free speech is covered under the First Amendment, it doesn’t mean we can’t hold them morally accountable for their hate. The government can’t punish them, but society as a whole can annex them.”

Others had a more blunt explanation for showing up. “Because Nazis suck,” said Sara Gelbert, another counter-protester from the Boston area. “It’s a matter of it being okay to be one right now, and I think it’s really important that we tell them it’s not okay to be one, ever.”

A majority of counter-protesters carried an anti-Nazi mentality, with numerous signs sporting crossed-out swastikas and rising chants of “Nazis suck!” One attendee casually asked his friend as they approached the crowds, “When are we going to go f—k up some Nazis, bro?”

President Donald Trump, whose responses to the Charlottesville rally have garnered international detraction, was also a target of counter-protesters.

“The outrageousness of Trump’s reaction of what happened in Virginia, and feeling like if people don’t speak up now, we’re going in a direction that’s incredibly terrifying,” said Lynn Girton, an attendee from West Roxbury who said the president’s reaction to Charlottesville was her main reason for coming. “We have a president who seems incapable of saying Nazism and white supremacy is wrong.”

Trump responded to the events in Boston with several tweets in the afternoon. An initial tweet focused on those apparently throwing objects at police, posting “Looks like many anti-police agitators in Boston. Police are looking tough and smart! Thank you.” In three subsequent tweets, he complimented the efforts of law enforcement and Walsh, suggested protests are necessary for the country to heal its divisions, and “applauded” the Boston counter-protesters for “speaking out against bigotry and hate.”

A small contingent of students from Boston College organized and attended the march portion of the counter-protest, which started in West Roxbury and ended at the Common. Tt King, the vice president of the Undergraduate Government of Boston College this upcoming year, created an event on Facebook, which 24 people said they would attend and 33 indicated they were “Interested.”

On Thursday evening, UGBC’s leaders issued a statement on Facebook affirming their stance against the “bigotry and racism” of the events in Charlottesville, and, in line with Jesuit ideals, emphasizing their continued support of marginalized and threatened communities. 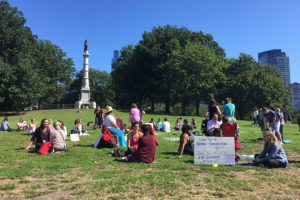 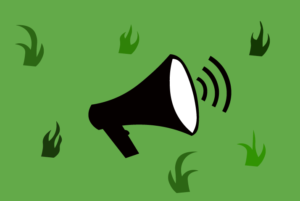