Home » Without Meehan and Dowd, BC Will Rely on Abundance of Youth in 2017 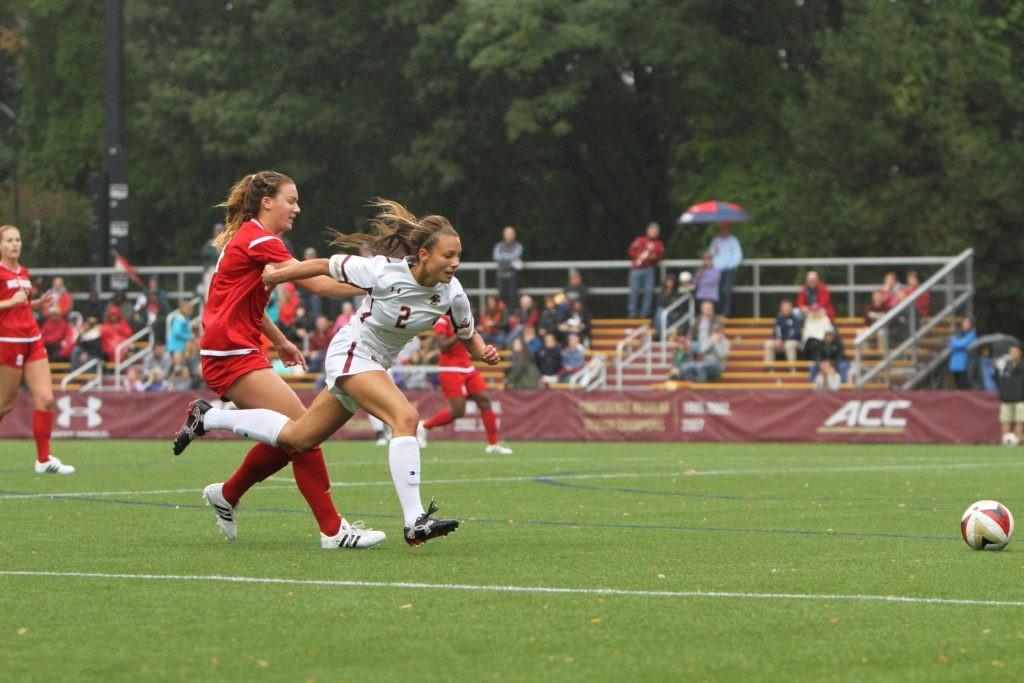 Without Meehan and Dowd, BC Will Rely on Abundance of Youth in 2017

Boston College women’s soccer dropped its first game of the season on Sunday to William and Mary in the James Madison University Tournament. The defeat marked the Eagles’ first non-conference loss in 707 days. But for head coach Alison Foley and Co., it could very well be the best thing that could have happened to them.

Last season, BC went undefeated in nonconference play. And it did so in dominant fashion. In those nine games, the Eagles outscored their opponents 25-6 and recorded five shutouts—three of which were consecutive. But Foley believes that the early-season success just hid its weaknesses.

“Winning can sometimes mask things, and I think that happened to us a bit last year,” Foley said. “Because we kind of went like, ‘Even though that was a bad mistake, [Meehan] will eventually score.’”

Redshirt senior and now-captain Lauren Berman feels that, due to the lower level of competition, BC was getting away with things that it normally wouldn’t have against any ACC opponent. No matter what went wrong, McKenzie Meehan and Hayley Dowd—the program’s No. 1 and No. 2 leading goal scorers, respectively—always picked the team back up. Consequently, the Eagles weren’t as keen to make adjustments.

But BC entered conference play only to be blindsided by the nation’s best. The Eagles finished 11th in the ACC with a 3-7 record, and missed the conference tournament.

The 3-1 loss to William and Mary last weekend forced BC to look itself in the mirror.

“It’s more like a wake-up call,” Berman said. “You’re not just going to coast through anymore. You’re going to have to fix the problems ahead of time.”

By falling this early in the season, Foley says the Eagles have the opportunity to embrace change. At this point of the year, every game is a learning experience.

And that’s largely because of how young the team is. In each of BC’s matches this season, Foley has started at least seven underclassmen, including four freshmen.

The abundance of youth is most apparent to Berman, who, in her fifth collegiate season, feels like many of the underclassmen resemble a different generation of soccer. She often finds herself changing back and forth between a mentor and a mentee.

Defensively, the Eagles look like a completely different team than they did a year ago. Besides captain Allyson Swaby and senior Madison Kenny, the rest of the backline hadn’t even put on a BC uniform prior to August. To play alongside the two veterans, Foley added freshmen Mijke Roelfsema and Gianna Mitchell, as well as junior transfer Elysa Virella.

Berman has detected rotational and organizational errors on defense in BC’s first couple of matches, but Foley is confident that the group will come together quickly. After all, Foley pointed out that despite never playing at BC, Roelfsema and Virella are already seasoned competitors. Roelfsema is a member of the U-19 Dutch national team and Virella has logged two collegiate seasons at Monroe College.

On the offensive side of the ball, sophomores Jenna Bike and Olivia Vaughn have assumed bigger roles than they had in 2016. Ever since the spring, the two speedy forwards have slid into Meehan and Dowd’s shoes.

In the Eagles’ season-opening scrimmage against Connecticut, Bike scored her first goal of 2017. Then, in the JMU Tournament, Vaughn led BC’s two-score, overtime comeback with a pair of goals. A few days later, the Montclair, N.J. native recorded her third goal of the young season with a strike against the Tribe.

Vaughn acknowledges that there is immense pressure to score when playing up top. But she’s used to it by now.

“I’ve dealt with this pressure for a really long time,” Vaughn said. “During my high school and club seasons, I was that top person as well, and was looking to score most of the goals and carry the team.”

Vaughn won’t have to carry this team though. And neither will Bike.

Unlike last year, Foley says that the team will no longer rely on one or two individuals to shoulder the scoring burden. As seen in the UConn friendly, in which four different BC players found the back of the net, any Eagle can score.

Foley’s team is as selfless as ever. From the beginning of preseason, players and coaches have sought to be inclusive within the program. The captains have held team meals, the sophomores have taken the freshmen under their wings, and Foley even brought the entire team, including the manager, to Harrisonburg, Va. for the JMU Tournament.

BC may have already conceded six goals this season—something that the team didn’t do last year until the second week of September—but Foley thinks that her team is on track to surpass its 2016 self.

“We’re a little bit young, and we may take a loss here and there with learning,” Foley said. “But I think the process is great. And I think the progress will be even better. I think we’ll be peaking at the right time this year.”