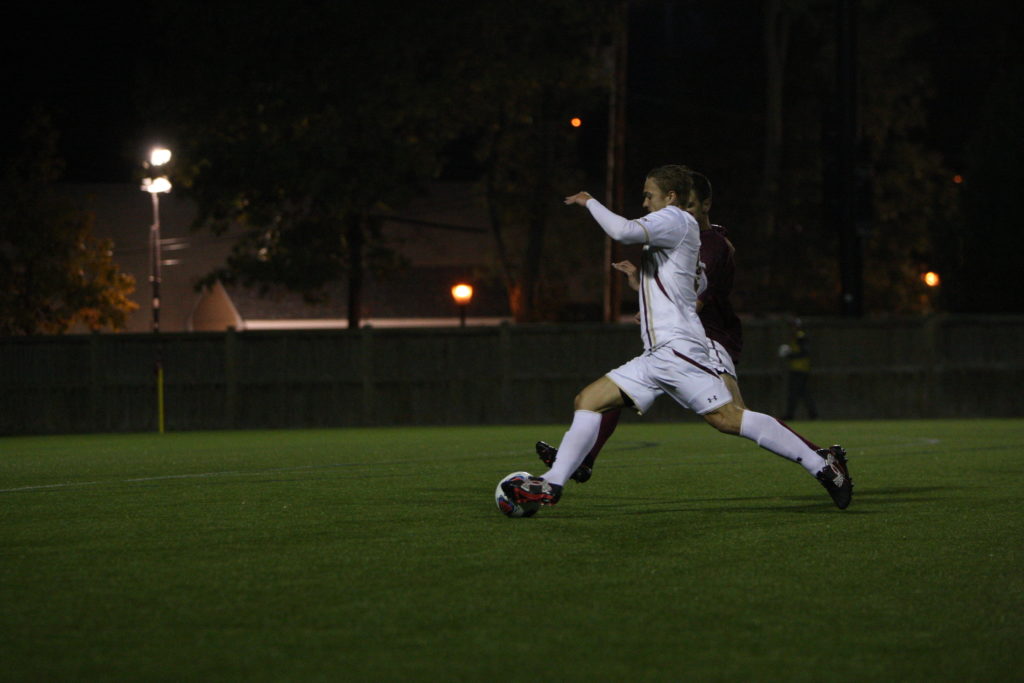 It didn’t have to go far, but Boston College men’s soccer travelled down Commonwealth Ave. this Sunday for the team’s road opener against rival Boston University.

In spite of fresh legs and high ambitions on both sides, Sunday’s contest turned into a lopsided affair as BC’s dynamic offense and staunch defense dealt the Terriers a 4-0 loss. For the Eagles (2-0), it marks the second straight 4-0 victory with four different goal-scorers to open the season.

With seven combined shots and seven combined fouls in the first 15 minutes alone, it was evident that both teams were beyond energized to hit the pitch with their local rivals. BU (0-2) came out shooting in the early minutes of the first half, earning a corner early, but could never locate the back of the net. In spite of the onslaught, new BC goalkeeper Jack Bacon remained unfazed.

And it didn’t take long for the Eagles to come knocking on opposing goalie Michael Bernardi’s door, either. An early shot from Callum Johnson gave Bernardi his first test, and save, of the game.

But Johnson wouldn’t be denied for long. After a yellow card issued to BU’s Colin Chiakpo in the 19th minute resulted in a Boston College free kick, the Eagles went to work. A beautiful pass from Younes Boudadi found the foot of a surging Callum Johnson in the 20th minute. From 35 yards out, Johnson found the back of the net, picking up his second goal of the season and opening the scoring for head coach Ed Kelly’s squad.

BC continued rolling as forwards Beto Luna and Nikita Bondar managed to successfully get behind the Terrier defenders and, again, twist up Bernardi. On a fantastic assist by Luna, the freshman Bondar picked up his first career goal to put the Eagles up 2-0.

Despite the Terriers recording four more shots in the first half, BC took tight control over the possession in the late minutes of the half and entered the locker room with a comfortable two-score lead.

BU made it clear coming out of the half that it was not going to just roll over. Popping off two quick shots, the Terriers did all they could to catch the Eagles sleeping. But the BC defense never wavered and the strikers proved they had more gas in the tank.

Things took a turn for the worse for the Terriers in the 59th minute when a charging Younes Boudadi was chopped down from behind in the box by a BU defender. Drawing the penalty kick, Kelly elected for Tommy Gudmundsson to take the freebie, and he cashed in to extend the lead to 3-0.

BC continued to put its foot on the gas peddle, pushing straight up the middle on yet another attack on Bernardi. The combination of Boudadi and Johnson again overwhelmed the Terriers defense, each picking up an assist on a goal by Simon Enstrom to give the Eagles a four-goal lead.

In spite of the seemingly one-sided score, the chippy game was hard fought on both sides with a lot of offensive effort. The Terriers, despite their winless record, showed persistence and energy on both sides of the ball, and they’ll look to bounce back after a long break this week. BC, on the other hand, spent the 90 minutes showcasing its offensive weapons and a staunch defense that has yet to give up a goal this season.