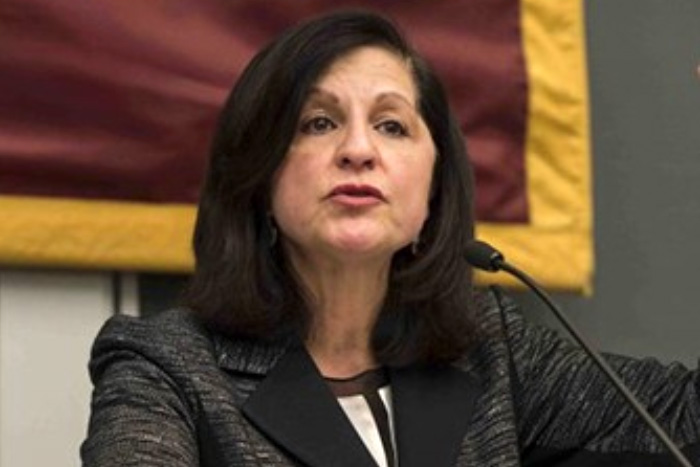 Carmen Ortiz, former U.S. Attorney for the District of Massachusetts, is on the faculty at Boston College Law School this semester as the Jerome Lyle Rappaport Visiting Professor. Her nearly eight-year tenure under the administration of President Barack Obama included the notable investigations and prosecutions of mobster James “Whitey” Bulger and Dzhokhar Tsarnaev, one of the orchestrators of the 2013 Boston Marathon bombing.

After resigning to make room for appointees of President Donald Trump in January, Ortiz spent some months with her family and travelling before coming to the Rappaport Center for Law and Public Policy in the summer to plan her curriculum. Her classes will focus on the intersection of law and national security, a subject she gained first-hand experience in after two brothers detonated a bomb near the finish line of the 2013 Boston Marathon, killing three, injuring hundreds, and starting a manhunt throughout the city and suburbs.

“I was there from the very beginning, from when the explosions went off,” Ortiz said. “I felt tremendously fortunate that I had the opportunity to be a part of this situation where I was able to work with law enforcement to figure out who was responsible and then to hold them accountable.”

After former Attorney General Eric Holder decided to pursue the death penalty, Ortiz met with survivors, law enforcement, the trial team, and the community to explain why the Attorney’s office was pursuing the sentence it did.

Engaging the community was part of Ortiz’s plan to fight the threat of terror. Her office stopped numerous planned operations by “lone-wolf” extremists from causing serious harm, keeping the perpetrators from ever  making it into the news. One such community group was BRIDGES, a group of Boston-area Arabs, Muslims, and Sikhs, that Ortiz met with monthly to discuss issues facing the community. While serving, Ortiz also created the district’s first Civil Rights Unit.

With this wealth of experience from her time as U.S. Attorney, Ortiz hopes to impart many things to her students at BC Law. Ortiz said her goal is for them to understand the complexities of terrorism and how hard it can be for law enforcement to combat it, and importantly the real challenge of acting in the interests of national security while at the same time protecting individual civil liberties.

“It’s not like it’s the Wild Wild West out there,” Ortiz said. “There are rules, there are regulations that law enforcement has to abide by. There are court reviews we have to abide by, and if you don’t abide by the rule of law, you could could lose critical evidence. You could lose the prosecution of an individual.”

When asked if she’s thought about her future after this semester, Ortiz, who has been discussed by some circles in years past as a potential gubernatorial candidate, said, “Yes I have. I have, and you’re going to find out pretty soon.”