‘Lean On Me’ Text-Based Hotline Launching This Semester

College is hard. Students face numerous stresses on a daily basis that can easily become problematic. For the common Boston College student, social, academic, and job-related pressures are constantly on the radar, and this can become overwhelming. As a result, a few students have brought forward a solution to provide support to their peers: Lean On Me Boston College (LOM BC), a non-emergency text-based mental health hotline launching later this semester.

Formed at the Massachusetts Institute of Technology in 2016 after a number of suicides had occurred, Lean On Me (LOM) is an active network at five major universities across the country. LOM is a 24-hour, anonymous and strictly confidential support network that connects students seeking someone to talk to with their peers, who are called Supporters. Shaye Carver, head of training and MCAS ’20, explained that each chapter has received very positive results from its students and expects to grow with time.

BC’s new membership in LOM is part of the movement to expand the network’s presence to new universities across the country. The BC chapter was unanimously approved by the Undergraduate Government of BC’s Student Assembly in April as an extension of the organization’s Student Initiatives division.

Aneeb Sheikh, head of publicity and MCAS ’20, emphasizes that there is a common stigma against going to counseling, which is a problem.

“Mental health issues are as serious as physical ones, but they’re not taken as seriously,” Sheikh said.

The main mental health resource on campus is University Counseling Services (UCS), which provides individual counseling and psychotherapy, crisis response, and consultations to address the mental health needs of the BC community. However, appointments with counselors are in high demand and, therefore, frequently delayed, commonly leaving students without the help they desire.

The hope for LOM BC is to resolve students’ issues through texting and reduce the demand on UCS. Students can anonymously contact BC’s hotline number through a text message and expect to receive a reply shortly thereafter.

The service is meant to address nearly any concern for students. For example, students can talk about a tough breakup, why they have been missing classes, or their test anxiety.

Supporters receive extensive training to become comfortable handling conversations with other students. Because they are not formally licensed or certified mental health professionals, however, they will follow a carefully planned emergency protocol and redirect students to the correct resources if they express active intent to physically harm themselves or others.

LOM aims to recruit Supporters of various demographics to reflect the diversity of experience and thought that exists at BC. Carver hopes to gather a team of at least 25 Supporters and to make the organization a known, commonly used mental health resource on campus.

“We would love to have a team of Supporters that are passionate about helping their community and creating a support system for their fellow peers,” Carver said.

The BC chapter is looking to identify applicants who want to foster a more understanding, caring community. Most importantly, the team wants to give Supporters the tools to effect change within the community.

“We value anyone who can provide empathy and nonjudgmental support to create a more supportive and connected campus,” McMahon said.

Students can connect with LOM by going to the Student Involvement Fair on Friday, Sept. 1. The network will be set up at the UGBC table.

The benefit of LOM is that students have the opportunity to communicate with people going through the same experience that they are: college. While speaking to a mental health professional certainly is not to be frowned upon, hearing the perspective of another student is a powerful tool from which students will highly benefit.

“Lean on Me is a great way to address the oftentimes hypercompetitive, conformist culture at BC because it allows people to be seen for who they are,” McMahon said.

mental health lean on me
Former U.S. Attorney Carmen Ortiz Joins BC Law Faculty
Back to Boston: Guide to Off Campus Eating 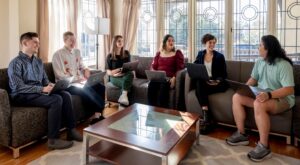