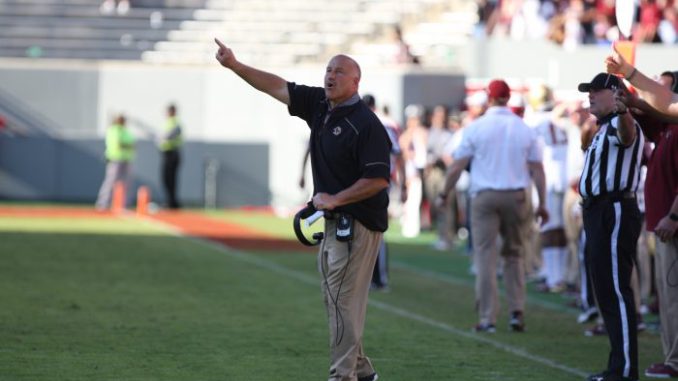 College football season on the Heights officially starts Friday when Boston College takes the field against Northern Illinois University. For fans, this means  crisp fall days and tailgating, expanded alcohol sales in Alumni Stadium and dreams of a repeat bowl victory. But before any talk of another bowl appearance, the Eagles must address some burning questions heading into the season opener in DeKalb, Ill.

The 2017 season is the conclusion of Addazio’s five-year plan. He has brought the Eagles to bowl games in three of his four years so far, winning BC’s first bowl in a decade (last year’s Quick Lane Bowl). Even so, he has received plenty of criticism during those years. He has posted a 21-27 overall record, including a 3-9 mark in 2015. BC has especially struggled against ACC teams during his tenure, going 10-22 over four years. Even last year’s bowl win came after a 6-6 season that saw BC win only two conference, both on the road. A lot is on the line during this fifth year. If the Eagles excel, Addazio and his rebuild project will be due for praise. On the other hand, if Addazio’s team struggles once again, new Director of Athletics Martin Jarmond may be making some tough decisions come season’s end.

One major criticism of Addazio’s tenure has been the slow offense he employs, atypical of today’s game. Addazio favors a run-heavy offensive playbook, and at times his refusal to stray from the familiar has meant that BC’s offense stagnates, and the games become boring. But this summer, he has praised his new up-tempo offense that will feature the same pro-style with more no-huddle sets.

Friday night will be the first real glimpse at the new offense in action against a real opponent. Revamping the offense isn’t just a personal choice on Addazio’s part—it’s a necessity for success. Last year, the Eagles ran just 67.8 plays per game. Contrastingly, the national leader in the category, Baylor University ran 88.6 plays per game. BC must develop a quick-hitting offense and give itself more opportunities to score. Addazio, however, has stuck to his old playbook in the past. This is a key question for the 2017 season, then—will he actually stick to an up-tempo offense? Or will he revert to old ways?

3. Will one quarterback be the starter all season?

Addazio refused to name a starter leading into the season opener, so it remains to be seen who will take the first snaps for BC this season (although it will likely be graduate transfer Darius Wade).

Steve Addazio asserts that there's no competitive advantage to announcing QB early, but that he's got a "plan in place" for Friday.

Last season, graduate transfer Patrick Towles started every game. In 2015, however, there was a carousel of starting quarterbacks. Wade, Troy Flutie, Jeff Smith, and John Fadule each recorded at least one start, with injuries and inconsistent play to blame for the constant rotation. This year, BC has six quarterbacks on the roster—Wade, Fadule, Anthony Brown, Tate Haynes, EJ Perry, and Matt McDonald. In reality, Wade and Brown will be the two players competing for playing time. If the Eagles can keep consistency in the quarterback position, it will only help them as they attempt to find an up-tempo offense—but constant change and disruption will hinder BC.

4. Will the defense hold up as one of the best in the nation?

BC’s defense has been among the best in the nation for the past two years. Over the offseason, the Eagles lost several crucial players—John Johnson and Matt Milano—to the NFL. Surprisingly, and luckily for BC, star defensive end Harold Landry opted to wait on the draft another year, instead staying at BC for his senior year. Landry is one of the best defensive players in the country, and one of the best in BC history. If the offense really does improve, and if Landry and his defensive teammates can reproduce last year’s productivity, BC will be in a perfect position to reach another bowl game. In 2016, the Eagles recorded 47 sacks (16.5 coming from Landry alone), forced 18 fumbles, and snatched 12 interceptions out of the air. Reproducing the crushing defense should be a top priority for the Eagles this season.

5. How will BC adjust to Landry being double-teamed?

Landry, a projected first-round draft pick, will be a key component of BC’s defense this year. Other teams, well aware of his skill and impact, will likely put more pressure on him, making it tougher for him to disrupt the quarterback and record sacks. If Landry stays cool, calm and collected, he will still be able to make a big impact this season. Additionally, teams focusing on stopping Landry will help players like Zach Allen boost their numbers. With Landry double-teamed, it will create matchups favorable for Allen, who can take over where Landry left off and disrupt the quarterback at every possible opportunity. As long as the Eagles take advantage of mismatches elsewhere, opponents attempting to smother Landry shouldn’t create too many headaches.