In Spider-Man: Homecoming, the friendly neighborhood superhero swings back onto the big screen with the most enjoyable iteration of the web-slinger in the past decade. The release—Spider-Man’s third major reboot—was greeted with a fair bit of skepticism as fans were curious what Marvel could reasonably add to the Peter Parker story with which we are familiar. In the wake of Andrew Garfield’s The Amazing Spider-Man, many had lost faith, as Sony turned Parker from the enthusiastic nerd, into a sullen skateboarder. In the face of this uncertainty, Spider-Man: Homecoming is a return to form for the franchise, and a turning point in the Marvel Cinematic Universe.

The movie opens up with a high energy video blog put together by Parker (Tom Holland), reprising his role from Captain America: Civil War. It is in that movie where we are introduced to the new Peter Parker, when he gets recruited by Tony Stark to steal Captain America’s shield. This scene may seem like a recap, but it serves a larger purpose in the development of the character.

This initial introduction clues viewers into how the character will be played. The vlog allows us to see this new kind of Parker, ecstatic and full of puppy-dog-like enthusiasm. For the most part, Parker is a small time Spider-Man. After his big intro in fighting with The Avengers, Parker wants more. He constantly tries to get in contact with Stark to get another mission. After discovering that someone is selling high-powered alien weapons to local criminals, he decides to take his next mission on himself. While dealing with the pressures of being a superhero, Parker also has to deal with the pressure of being an academically advanced high school student. Between his workload, girls, and stopping a criminal mastermind, Parker begins to show signs of stress.

One thing Homecoming does extraordinarily well, especially compared to most superhero movies, is lower the stakes. Most superhero movies focus on stopping the literal destruction of the planet—with such high tension, the human parts of story often get overlooked. Homecoming returns to the idea of the friendly neighborhood Spider-Man, and instead of fighting for the fate of the world, keeps a majority of the film focused on New York City—not Manhattan, like in The Avengers, but smaller neighborhoods, like Parker’s Queens borough or on the Staten Island Ferry. The film also dedicates an admirable amount of screentime to high school, which allows us to care and understand the pressure on Peter, even when he is not in the suit. The scenes in the school are very well done and showcase some impressively realistic teenage interactions and dialogue seen on screen in recent memory. The movie functions more like a John Hughes movie then a Michael Bay action film, it’s not a superhero movie set in a high school, but rather a high school movie that happens to feature a superhero.

A recurring problem in the Marvel Cinematic Universe is a lack of decent villains. With the amount of heros they have, there’s no time to develop a compelling or sympathetic villain who is more than just pure evil. They solve this problem in Homecoming by giving the villain, Adrian Toomes, or Vulture (Michael Keaton) a real backstory, and actual motivations. Keaton gives a fun, and surprisingly nuanced performance, to bring the character to life.

The real key to this movie’s success lies in Holland, who brings an outstanding level of energy to the role of the famed wall-crawler. Holland buys into the role, delivers one liners with ease, and conveys the eagerness and fun that has made Spider-Man one of the world’s most popular super heroes. Much like Spider-Man, Holland just seems happy to be there. Holland pulls of the scenes in and out of the suit—he shows the difficulty in trying to go to debate contests and dances, while still stopping dangerous weapon deals. Holland has an impressive ability to convey emotions and is able to go toe to toe in scenes with Robert Downey, Jr. His charisma and charm oozes from the screen, and there is no question that Holland will be a star that will stick around.

The easiest way to summarize Homecoming is that it is just a really fun movie. Viewers may find themselves smiling from scene to scene. The movie never takes itself too seriously, and perfectly walks the line between excitement and humor. In a summer that featured incredible films, Homecoming stands out as the most enjoyable film of the summer and one that fans are sure keep rewatching.

Tom Holland spider-man: homecoming robert downey jr.
In ‘Dunkirk,’ Nolan Brings Elegance and Simplicity to Blockbuster Filmmaking
Up the Creek Without a Paddle 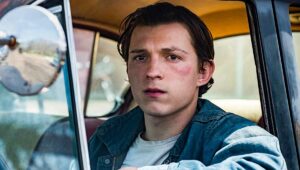