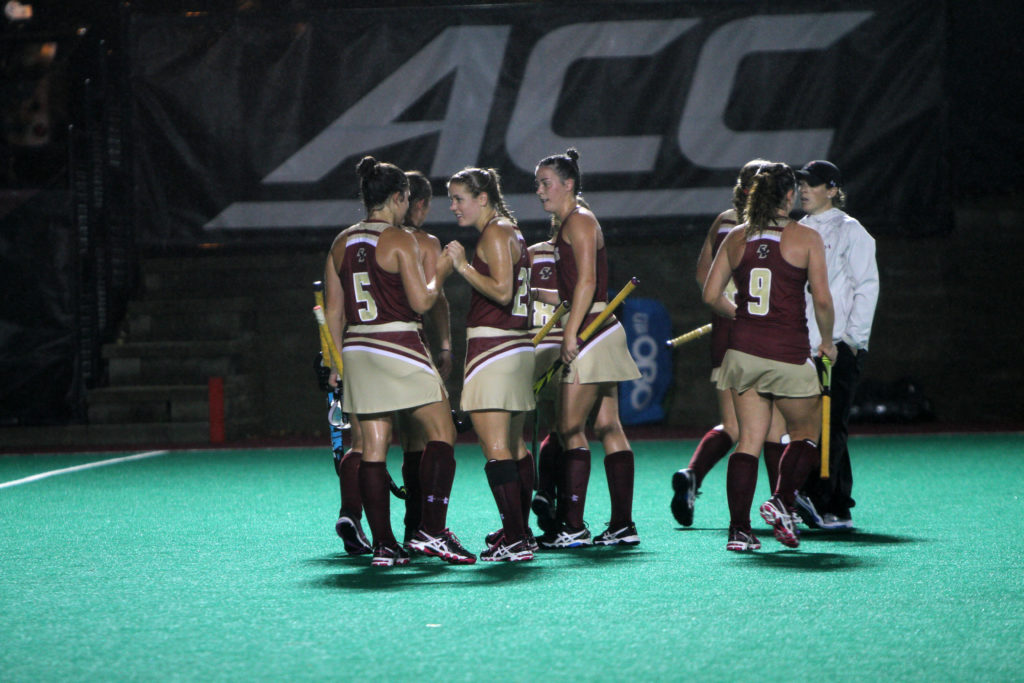 The head coach of Boston College field hockey is happy when her team wins, let’s be clear. But after the Eagles’ 2-1 win over No. 6 Maryland last Saturday, her team broke into cheers, thrilled about the upset. That’s not the kind of thing she wants to see anymore.

“I want to get us to the point where teams are celebrating so joyously that they beat BC, the way we did when we beat Maryland,” Doton said. “That’s where I want us to get to.”

How they get there is the question. So far, in 2017, the Eagles are off to a good start. Entering Friday’s first ACC matchup of the year against a 5-0 Syracuse team, BC (4-0) has taken down three ranked teams, two of which are from the Big Ten. For that, Doton believes there are many keys.

First, it comes in the offseason, when she wants her girls thinking of anything but field hockey. Doton encourages them to play other sports, or explore the world.

“Because when they come back,” Doton said, “they have a little bit more love for this place, and the game.”

Some of her players stay athletic by playing soccer or ice hockey. Others take the chance to study abroad—one player, Lucy Lytle, once spent a summer in China. But they also have to maintain her high standards of fitness. Each of the players gets a workout packet before they leave for the extended vacation. By the time they come back, she expects them to be able to ace the 30-15 fitness test, in which the players intermittently run at different speeds and distances, changing directions and moving at increasing speeds. She says, for the first time, every single player passed.

Another key comes with her youngest players. After losing two of her top forwards—Eryn and Emily McCoy—Doton has seamlessly replaced them with freshmen Jaime Natale and Caroline McGovern. The two are the team’s leading scorers, with six and five points, respectively.

One of the biggest adjustments for the freshmen, however, is in their defense. Doton believes it’s a nationwide epidemic that U.S. field hockey players simply just cannot play defense as well as their international counterparts. As the 2003 National Field Hockey Player of the Year at defense for Wake Forest, Doton, a two-time national champion, prides her teams on aggressiveness, attitude, and attack. She attempts to implement that mindset in attackers like Natale and McGovern by having them think like defenders.

As long as they have this mindset, Doton believes they don’t need to have been taught her defensive system. They just need to buy in. Then, the defensive players take care of themselves. It’s easy, considering they’re her two captains. Along with Lytle, who Doton believes is one of the nation’s best flyers, the Eagles are led by captains Frederique Haverhals and Ymke Rose Gote, both from the Netherlands. And this all comes with a newcomer in net, Sarah Dwyer. The sophomore comes in after several years of veteran netminders in Leah Settipane and Audra Hampsch. As the team’s only goalkeeper, it’s not like she has a choice. But Doton is fortunate that she has come in incredibly prepared for the ACC.

“She’s a great communicator on the field,” Doton said. “She can help organize back there.”

Now, it’s time to take the team to the next level. As the only coach in program history with an ACC tournament win and NCAA tournament win, Doton wants to make her team the aforementioned consistently feared weapon in the the nation’s toughest conference. But, she did make one exception for a cheer after the game.

“Every program steps into the season saying they want to win a national championship,” Doton said. You know, of course you do. I want to win the first women’s ACC championship here at BC. … They could be the first to do it. And that means something special.”