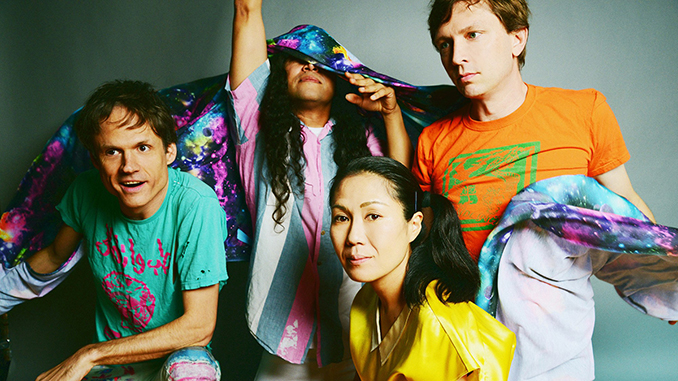 From bit-tune power noise to children’s nursery rhymes, San Francisco experimental rock outfit Deerhoof has nearly exhausted the list of musical flavors that could together make an uncomfortable listening. It is this feeling of unease that has made the band’s work so attractive. We’re washed in a barrage of genres personified as extreme caricatures of the cultures that spawned it. Everything’s unhinged from its source. Unfortunately, a detour into the world of more conventional alternative has marked an end to Deerhoof’s courageous experimentation.

Its latest release, Mountain Moves, hit the shelves two weeks earlier than its release date (in a move similar to that undertaken by fellow noise-rock practitioners Death Grips), and was available on its Bandcamp page for a price of the buyer’s choosing. All proceedings from the album go to the Emergent Fund, an organization providing support to marginalized communities affected by the Trump administration. As fans of Deerhoof well know, the band is no foreigner to political discourse. Its 2003 release “Apple-O” is a quintessential anti-war anthem for the 2000s. While there are certainly traces of political statements present on Mountain Moves, concocting catchy dance patterns and deconstructing unrealized elements of its previous work seems to be of greater importance than making any call for political revolution.

Indeed, lead singer Satomi Matsuzaki‘s vision of revolution is always youthful and innocent, and often contradicts the content of her lyrics. Songs like “Slow Motion Detonation,” on which Matsuzaki takes aim at those inhibiting social progress (“Future that you could have saved / slow motion detonation”) remind us of a fantasy war between elementary school children. “Freedom Highway,” the most politically focused track on the record, imitates the country-riffs of classic rock acts familiar to anyone with an FM radio. In “There is just one thing I can’t understand,” Matsuzaki declares in the monotone of a marching general, “why some folks think freedom is not designed for all men.” It’s a complex message put in terms that are comical and simple, in the vein of punk’s tradition to satirize the dense obscurity of American bureaucracies.

But whatever punk ethos Matsuzaki advocates for is drowned in a glitzy wash of pre-programmed drum beats. While we still have those cacaphonic drum collisions which occasionally assault our eardrums, they are sprinkled sparsely throughout the record’s 39 minutes, and are predictable to a fault. Rather than providing a backbone to the instrumentals, Matsuzaki and crew use these descents into chaos to strategically undermine those hip dance tempos one might feel inclined to groove to.

For example, both the xylophone sprinkles on the title track “Mountain Moves,” and the carnival tinted organ of “Kokoye” disintegrate into lucid nightmare fuel for sake of reprimanding the desire to sound enjoyable. Fans of the avant-garde need not worry about enjoying the ethos of contemporary pop music. With a little distortion, and disclaimer that they’re being serious, Deerhoof abuses the elements that made the band so intriguing in the first place.

This is not to say the record doesn’t have its moments of authenticity—its cover of “Gracias a la Vida” originally by Chilean musician Violeta Parra substitutes the loosely strung guitar echo of the original for an oozing, beautifully airy string section. Though one of the album’s sincerer efforts, its adjacency to two songs that sound like outtakes from a Primus album doesn’t make for the smoothest listening. While it worked on previous Deerhoof records, this blending of styles feels discontinuous, less involved in the postmodernist pastiche of soundscapes the band has proven to be so great at formulating.

Which brings us to those songs, often catchy pop melodies, which have a habit of dissolving into loosely structured cacophonies reminiscent of something a Transformer would sing. On tracks like “Sea Moves,” and “Your Dystopic Creation Doesn’t Fear You,” listeners are teased with hints of a malevolent presence that never takes over fully. It is background screeching and drum clashes which embellish, rather than lead, the still accessible reggae-tempo.

Occasionally, the desired effect of these superimposed dissolutions is achieved more faithfully through a subversion of the genre from which they’re borrowing. On “Singalong Junk,” Matsuzaki tells the story of going to a picnic by the lake with her family. This segment overlaps a two minute-long interlude of harmonic voice quavers provided by singer Xenia Rubinos. We feel trapped in the synthetic beauty of an afternoon outing—strangely textured synth organs turn the family into an object of distrust. The scene is just as fabricated as the title of the song suggests. The effect is wonderful.

If only this could be said for the rest of the album. Unfortunately, Deerhoof has eschewed its punk and noise-rock origins for a trite replication of its most superficial aspects. By attempting to lean in a more accessible direction, they’ve become false parodies of bands of lesser merit. One can hope Mountain Moves is a minor digression in Deerhoof’s discography, and that the band will return in the future to a sound more daring, whatever sound that may be.