A sequel to her hit music video “Now or Never,” Halsey’s “Bad at Love” continues to push her carefree and rebellious ambiance.

The video begins with Halsey getting off a motorcycle at a desert gas station, where her rugged look foreshadows the theme of insurgency within the video. She picks up a newspaper, where the viewer can see that she is wanted by the police. Somehow, Halsey is untouched by her predicament—she eats candy and snacks and dances around even though she is running from the cops. When the police arrive at the gas station, Halsey and her new friends successfully distract the cops in an unrealistically seamless and flirtatious manner. They escape from the authorities to an arid open road, where they laugh and are free from the confines of societal pressures.

The video, overall, however, was dry (no pun intended). The plotline of the video lacked substance or excitement, and as a whole the content was illogical. Halsey’s plight was resolved halfway through the video when she escaped the police, leaving the remaining few minutes trivial and uneventful. The music video did have certain elements that reflected the lyrics and overall theme of the song. The bad-girl feel of the video complements the song’s title. Throughout it, Halsey sings of her previous relationships gone wrong, all while incorporating a tough, grungy atmosphere in the music video. Her new short haircut is edgy and her clothes look straight out of a Hot Topic catalog. Her attitude is inciting and somewhat hostile—in one scene she physically fights with the girls who will soon become her sidekicks. This badness portrayed throughout the video directly parallels the lyrics to the song—not only is she bad in terms of her looks (thigh-high boots, motorcycle, and so on), but she is also bad at relationships.

Halsey’s artsy new video was released in support of her new album, hopeless fountain kingdom, which debuted at No. 1 on the Billboard Hot 200 back in June. The video is the perfect goodbye to summer. A cop-eluding joyride through the desert in a convertible may be an activity restricted to the warmer months, but the music video lasts year-round. 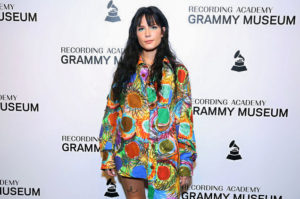