Home » Eagles’ Strong Defensive Effort Not Enough Against No. 10 Clemson 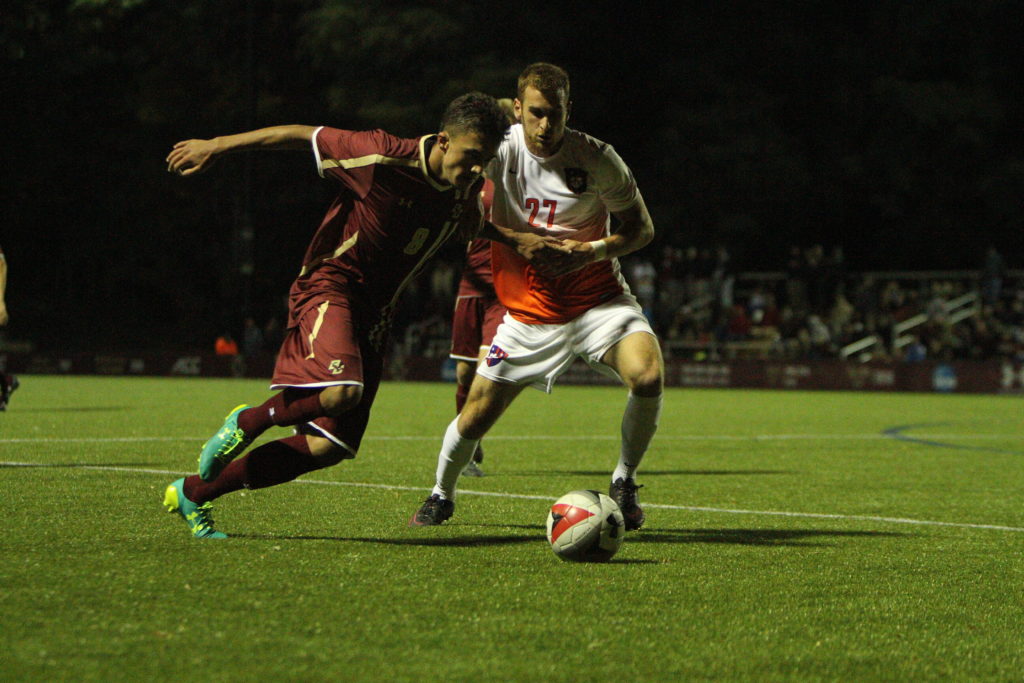 Eagles’ Strong Defensive Effort Not Enough Against No. 10 Clemson

Just like last season, it looked as if Boston College men’s soccer was on the verge of finally snapping its 11-game unbeaten streak against Clemson on Friday. But once again, the Tigers dodged a bullet, this time scoring the game’s lone goal in the second half to secure a 1-0 victory.

Tigers’ right back Tanner Dieterich streaked through the heart of BC’s defense in the 60th minute to latch onto Oliver Shannon’s through ball into the right side of the box. Dieterich did not waste his chance, tucking the ball into the side netting at the far post for the eventual game winner. Unfortunately for BC, Dieterich’s goal came off of an Eagles turnover in their own territory. As they attempted to break out into a counter-attack, an errant pass eventually fell to the feet of Shannon—a 2016 All-ACC second teamer—whose subsequent pass sliced the Eagles’ defense wide open.

On the bright side, part of the reason Clemson’s goal stood out is because BC’s defense did not have many vulnerable moments. Head coach Ed Kelly asked his team to sit back and defend, leaving four banks of four players behind the ball to defend, with only two, and at times in the second half, only striker Simon Enstrom left up the pitch, ready to attack back on the counter.

The group got off to a rocky start, with Eagles captain Len Zeugner misjudging a header two minutes into the game, leading to a golden chance for Clemson striker Jason Wright, and forcing a wonderful save from BC keeper Antonio Chavez Borelli. Clemson kept its foot on the gas. On the following corner, defender Justin Malou got free in the box for two more chances on goal, the second swinging wide of the post.

From that point on, though, BC more than held its own. The next 15 minutes saw the Eagles generate two solid chances for Enstrom, who went wide left on his first chance of the game from inside the box, and then rushed his second chance minutes later, again pushing the ball well wide. At the 20-minute mark, defender Tomas Gudmundsson found his way to a free header off of Mohamed Moro’s corner kick and grazed the top of the crossbar, only feet away from giving BC a one-goal lead.

After Gudmundsson’s chance, BC struggled to create any more offense, as Clemson’s press forced the Eagles to work hard just to get the ball out of their defensive third of the pitch. The defense would bend, allowing the Tigers to advance up the pitch and often conceding corners—13 of them to be exact—but rarely break and give up real chances off of those set pieces.

The start of the second half didn’t yield quite as positive a result as the scoreless first half had. BC’s attempted clearances, which were designed to alleviate Clemson’s constant pressure, went from long-range blasts to errant passes in the defensive third that led to Tigers chances. Suddenly, a defense that had looked so organized in the first half got forced out of position by a poorly timed turnover and that ended up being enough to sink the Eagles’ hopes.

But once the Tigers began to let up on their pressing style in the final 15 minutes of the game to preserve their lead and seal the win on the defensive side of the ball, the Eagles offense came to life for the first time in 55 minutes or so. The best chance of the second half came when midfielder Lasse Lehmann played a clever chip pass to substitute Trevor Davock, which ended in Davock holding off his defender and firing a shot wide right. Fullback Younes Boudadi looked to be the best threat BC had running with the ball at his feet.

In addition to this offensive progress, the Eagles still didn’t let up another goal to this dangerous Clemson team, which missed some of its better players due to injury and suspension, but still looked dangerous for the entire game. The Eagles themselves lost their rock in the back line, Gudmundsson, in the 61st minute—a player who had only missed 18 minutes total this entire season leading into the game. And yet Clemson was still held in check for the final 30 minutes.

Kelly made it clear in his postgame comments that he was more than satisfied with the team’s efforts.

“It was a good game, two evenly matched teams,” Kelly told bceagles.com. “I actually think we were a little bit better, but tonight wasn’t our night.”

There haven’t been many nights this season where the coach could say it was BC’s night. The slow start to the season has showcased a group far short of where it needs to be to compete in its division of death. After this performance though, a positive one for a team that hasn’t scored against Clemson since 2013, there is now a glimmer of hope for the Eagles’ coach, and their fans.