Freshman year at Boston College is rarely a time of culinary excellence. In fact, it is usually a time of culinary mediocrity, if not outright failure. Your average freshman eats three meals a day at the dining hall, growing less and less enthusiastic with every piece of orange chicken. Maybe they throw in some variety with a Pelon burrito or a couple Slim Jims from CityCo.

Lying in bed watching reruns of Parks and Rec, belly full of your third steak and cheese this week, chomping on that Jim of Slim and deep-sea diving through the last Dorito crumbs in the bag, you’ve probably longed for a home-cooked meal.

One night, Patricia Jackson, CSOM ’20, decided to do something about it. She whipped up everything she needed to craft a succulent chicken parm—the chicken, the parm, the whole works—and prepared to unleash the art of cuisine on an unsuspecting campus. A slab of chicken, carefully breaded, with cheese curdled from the milk of faraway bovine perfectly laid across it, and the final ingredient—can we even speak of it without shedding a tear? That godly gift given to undeserving humanity—tomato sauce. It was ready. It was perfect. It was time to cook.

So she put it in the microwave. It didn’t work out great.

Because, seeing as she was a freshman, the options were limited. Forced triples in CLXF can’t exactly fit a full kitchen set. Even those luxurious Chevy quads don’t get a cooking setup. Freshmen who’ve spent years learning the art of crafting the perfect coq au vin, the delicate beauty of a perfectly-seasoned ciceri e tria, and the subtle nuances of the much-neglected pappardelle arrive on campus with a mandatory meal plan and a roommate who eats Domino’s in his underwear every night.

The only options left to the young chef are a sojourn to the mythic Shaw House to use its oven or a visit to the Resident Minister. Shaw House remains a frightening place, known mostly through legends and tales, which the naïve freshmen often avoid. And the social interaction necessary in order to ask a Resident Minister if you can cook in their suite is often too much of an interpersonal struggle for an awkward 18-year-old.

Unless you’re one of the lucky few who knows a senior willing to let you cook at their dorm, your culinary life is finished. This is when most freshmen toss in the towel, join the line at Eagle’s Nest, and let their dreams of Texas Tommys and savory haggis die.

Jackson wasn’t about to let that dream die. She had known cooking for too long. When she was just a kid, her grandmother introduced her to the most grandmotherly of cooking activities—baking cookies. They worked together and Jackson found that it was surprisingly fun. She wasn’t just molding dough and flipping oven knobs. She was turning raw materials into a finished product that people could enjoy, something that would bring people together. So she stuck with it and the cooking habit grew.

She made real entrees and grew as an amateur chef. So it made sense that when she came to BC, she was interested in finding a club where she could practice this passion. But that turned out to be a lot harder than it first seemed.

Walking through the Student Involvement Fair, she spotted clubs with a culinary theme, such as baking, but nothing to address the simplest of food-making activities—actual cooking. BC didn’t have an organization devoted to people who just wanted to make food. As a freshman, Jackson didn’t see much she could do about that, so she let it go and went about her merry way without the club she had been looking for.

The culinary black hole of a freshman year at BC—with its microwaved chicken parm, an abomination that should offend chickens everywhere—was set to swallow her, until a Facebook group post offered a glimmer of light. That black hole might not be a place of such darkness and extreme gravitational pull that escape is not possible. David Eng, a CSOM student who transferred to Northwestern University, wanted to start a cooking club and was looking for help. Just like that, Jackson broke free of the black hole and sped back toward the interstellar light of home-cooked meals.

She contacted Eng, went in for some casual interviews, talked about her passion for cooking and ideas for the club, and managed to snag the spot of vice president. Eng pulled in others, establishing a basic organization structure for the club. Now they got to the hard part.

Getting a club off the ground is harder than it might seem.

As a member of a Jesuit institution, one might turn to the Bible for guidance. Matthew 18:20 reads: “Where two or three are gathered together unto My name, there am I in their midst.” Unfortunately this principle does not apply to the official budget for registered student organizations. Just because a couple of students have gathered to participate in club activities, does not mean that they will receive a large budget. Officially starting in April of last year, the cooking club didn’t have the money it wanted to put on big events, and it didn’t have the attention either.

But it did have what Jackson wanted—the chance to cook.

“Food is almost a language,” Jackson said. “It’s a great way to relate to others.”

For the first small events the cooking club started, it gathered in the kitchens of resident ministers. The intimate setting was perfect. It allowed for the closeness of cooking with others and enjoying the final meal.

“Sometimes I don’t even eat the food I make,” she said. “I just like making food, and I like getting to see other people’s reactions when they taste it.”

Jackson stepped up as president of the Cooking Club after Eng transferred, just in time for its first official full semester as a registered student organization, and she has big plans. She wants to continue the intimate cooking with all the social opportunities that offers, but hopes to add larger components, specifically service-related. She’s reached out to local organizations and is working on plans to start assembly-line style food production. This means making tons of sandwiches for the homeless and hungry in Boston. It’s one way to take the personal enjoyment of cooking and turn it into something for others to benefit from.

This year, when freshmen walked through the Involvement Fair looking for a chance to cook at college, they found Jackson’s table, and over 430 of them signed up. No more rubbery chicken and greasy Slim Jims—these kids have found an outlet. And Jackson is more than willing to bring them into the culinary world she’s so passionate about.

“Getting to make those connections is probably the biggest payoff and the fondest memories I have,” she said. “Just sitting in rooms eating God knows what and talking to people.” 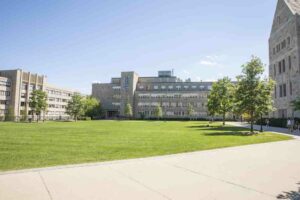