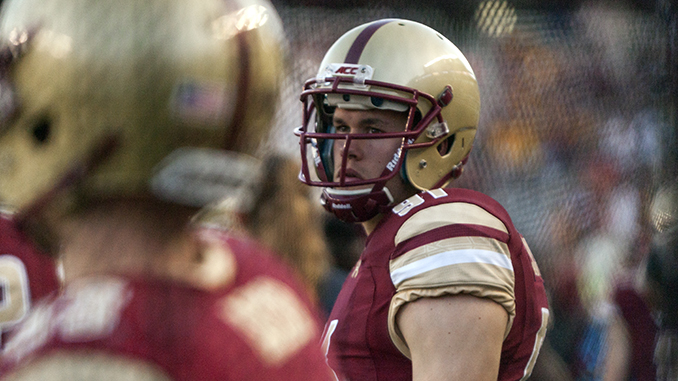 In only a few months with Boston College football, Max Schulze-Geisthovel has earned every bit of his nickname, “Das Boot.”

The German kicking sensation, who led Ed Kelly’s soccer squad with seven goals last year, has launched 10 of 14 kickoffs out of the back of the end zone for touchbacks this year. That 71.4 percent touchback rate ranks 15th in the country. And, more importantly, Schulze-Geisthovel’s leg has limited opponents to a mere 16 yards per kickoff return on average.

His early success—and the ease with which he seems to achieve it—has sparked questions. Just how far can this mystery man kick a football? And could his power ever be leveraged into a deep field-goal attempt given the right situation?

We may never know the answers, but Schulze-Geisthovel did give me some insight into his field goal kicking potential after Tuesday’s practice. Earlier this year, head coach Steve Addazio ran a situational drill in which the field goal unit worked on deep attempts and Michael Walker practiced returning them, if short.

On just “two or three” tries, Schulze-Geisthovel says, he nailed a 58-yard field goal through the uprights. Fifty-eight!

For reference, only one kicker at the college level (Zane Gonzalez of Arizona State) booted a longer field goal in 2016. Now, he’s in the NFL. It was only practice, sure, but Schulze-Geisthovel didn’t use a kicking tee, as he does during kickoffs.

Addazio already has a solid punter in Mike Knoll and a reliable field goal kicker in Colton Lichtenberg, but now he possesses another special-teams weapon in his back pocket. Given the appropriate circumstances, Addazio might consider giving Das Boot a shot to deliver the most thrilling three points BC fans have seen in a long time.