Home » LTE: Theology Professor Responds to “LTE: A Response to ‘Looking Forward to a Progressive Future'” 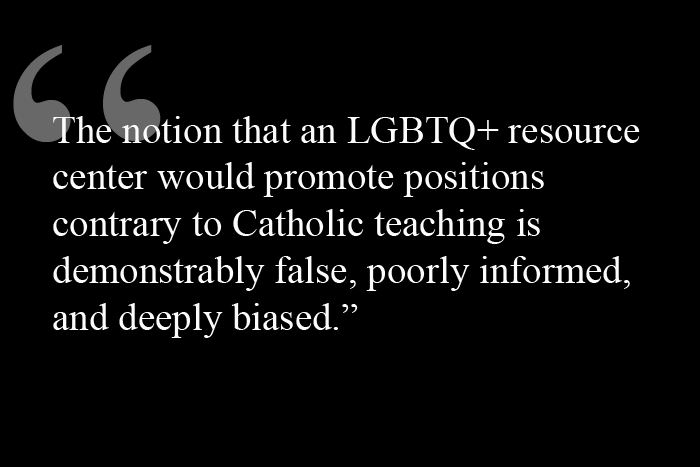 LTE: Theology Professor Responds to “LTE: A Response to ‘Looking Forward to a Progressive Future'”

This comes as response and correction to Ms. Grace Dietrich’s ill-informed letter opposing the establishment of an LGBTQ+ resource center on campus. She shows alarming ignorance of the Catholic Church’s official position regarding the support and respect due to members of the LGBTQ+ community, as also of a significant current book on the same topic by the single most widely read Catholic author of the day, the Jesuit Rev. James Martin, S.J.—not to mention Pope Francis’s own demonstration of support and compassion for gay persons and families, which has stopped short of “opposing” Catholic doctrine.

The official stand of the USA Catholic bishops can easily be found in their pastoral letter of 1997, Always Our Children: A Pastoral Message to Parents of Homosexual Children and Suggestions for Pastoral Ministers. The fact that they oppose marriage equality in no way compromises the 1997 letter. The current book is by none other than Father Martin, S.J., Building a Bridge: How the Catholic Church and the LGBT Community Can Enter into a Relationship of Respect, Compassion, and Sensitivity (2017), currently ranked by Amazon as #2 in sales of books on Catholicism and #1 in the field of social issues in Christian living. His earlier books on Jesus, the saints, and Jesuit spirituality remain authoritative in their fields.

The point of any resource center is to assist people and the wider community in understanding their own identities, gifts, challenges, and limits. As a place for for dialogue, listening, and understanding, any resource center does that by definition. If Catholic colleges need anything, they need resources to articulate a Catholic position in a way that assists personal growth and a sense of calling, all the more so for those whose identities are socially, economically, or otherwise in a minority or subject to social bias: a clear rationale for LGBTQ+ programming. It is precisely such students as Ms. Dietrich who need such a resource center, regardless of their orientations. And indeed, in my over 30 years at Boston College, the progress in this area has been considerable.

I could not go so far as the original column by Mr. Razis in assuming that the strategic plan is hostile to such a center. Much less would I presume to advise University President Rev. William P. Leahy, S.J. on his priorities. But the notion that an LGBTQ+ resource center would promote positions contrary to Catholic teaching is demonstrably false, poorly informed, and deeply biased. 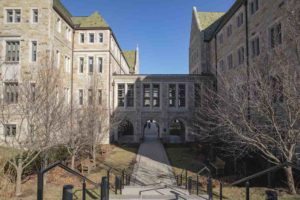 3 COMMENTS ON THIS POST To “LTE: Theology Professor Responds to “LTE: A Response to ‘Looking Forward to a Progressive Future'””