Home » After Shocking Start, BC Collapses in Fourth Quarter Against No. 2 Clemson 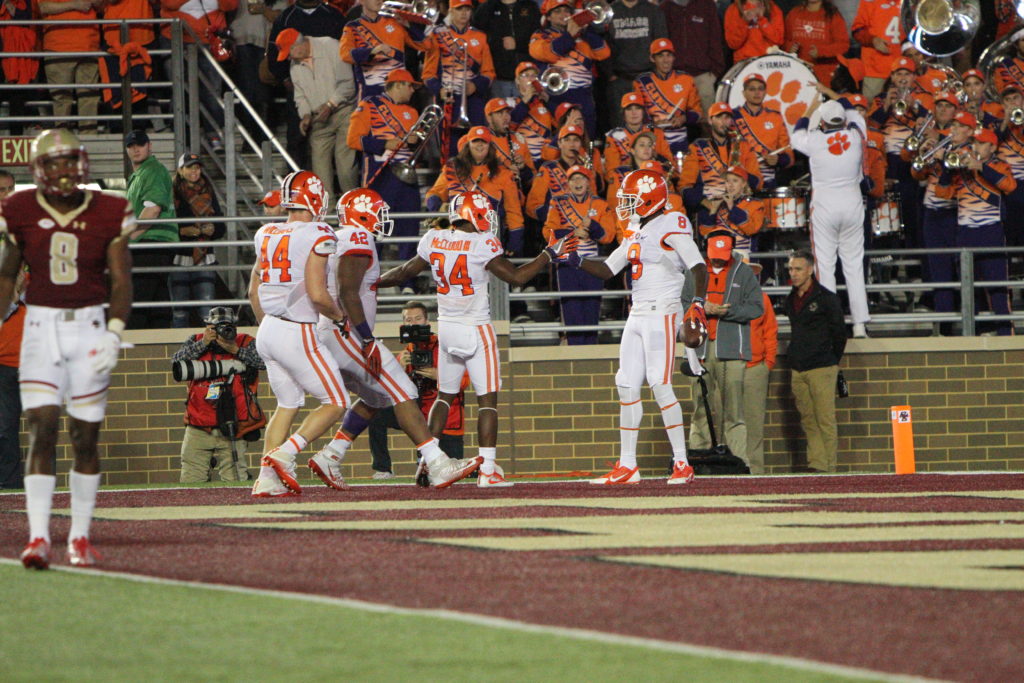 After Shocking Start, BC Collapses in Fourth Quarter Against No. 2 Clemson

Last week, Boston College football hung around with Notre Dame for two and a half quarters. Then, all hell broke loose. In the final 20 minutes of play, the Irish rattled off five rushing touchdowns—each of which increasingly overshadowed the Eagles’ commendable first-half performance. On Saturday, BC stayed in the game a little bit longer than it did the week before. This time, the Eagles played defending national champion Clemson close up until the fourth quarter. But, once again, everything started to unravel for head coach Steve Addazio’s team.

Over the course of about 12 minutes, Clemson poured on four touchdowns—all on the ground—turning a 7-7 tie into a 27-point blowout. At one point, this game had a chance to go down as one of BC’s biggest upsets in program history. But after the final frame, it’ll be remembered as nothing more than another punishing loss to a top-tier opponent.

For a while, this one was a chess match. Both teams battled for field possession for much of the opening quarter. And it’s safe to say that BC (1-3, 0-2 Atlantic Coast) came out on top. Mike Knoll pinned the No. 2 Tigers (4-0, 2-0) inside of their 10-yard line on two of his first three punts.

Backed up in their own territory, Clemson struggled to move the ball downfield on its two drives of the afternoon. With the exception of a few pass plays here and there, quarterback Kelly Bryant and the Tigers offense looked lost. To make matters worse for head coach Dabo Swinney, Clemson turned the ball over on its ensuing series. Shortly after Bryant dropped back to pass, Harold Landry broke through the Tigers’ offensive line. With Landry in his face, Bryant threw up a duck. Isaac Yiadom fielded the ball—his second career interception—and took it to Clemson’s 28-yard line.

But BC failed to capitalize. In fact, it almost gave the ball right back. Following a pair of short A.J. Dillon runs, quarterback Anthony Brown rolled to his left and threw across his body. The ball was inches away from being picked off. So, the Eagles settled for the field goal. Or so they thought. Colton Lichtenberg, who was a perfect 6-for-6 to start the season, hit the right post on a pivotal 43-yarder.

At the end of the first quarter, the game was still scoreless. To put that in perspective, by this time in last year’s game, Clemson was already up three scores.

But BC wouldn’t keep the Tigers off the board for much longer. Starting on their six-yard line, Clemson began to march the ball downfield, just two minutes into second period. Bryant and running back Tavien Feaster got the chains moving, but the Eagles almost stopped Clemson in its tracks. After converting on third down for the first time all game, Bryant scrambled up the middle. BC cornerback Lukas Denis came out of nowhere to punch the ball out. Fortunately for the Tigers, offensive lineman Taylor Hearn scooped up the loose ball and ran for the first down.

There were no more hiccups after that. Bryant and his running backs, Travis Etienne and Feaster, took turns running the ball, gaining chunks of yardage at a time. Bryant capped off the 94-yard drive with an easy quarterback draw, touchdown run.

For the fourth-straight game, Brown was tasked with running the two-minute drill before halftime. Only this time, the stakes were higher than ever. On back-to-back plays, Brown hooked up with Jeff Smith for a total of 20 yards. But after that, BC just moved backwards—in large part because of its head coach. Before Brown could get the snap off on third down near midfield, a yapping Addazio was called for an unsportsmanlike conduct penalty. The 3rd-and-10 became a 3rd-and-25, which forced Brown to throw the ball deep. He did just that, but his pass was intercepted by Trayvon Mullen.

After turning Clemson over on downs just short of the 50-yard line, BC got one more shot on offense before intermission. As the clock wound down, Brown heaved a “Hail Mary” to the end zone. But the ball was 20 yards short and out of bounds. While the Tigers’ offense was floundering, its defense was pitching a shutout.

Things didn’t get any easier for Bryant on Clemson’s first drive of the second half. The junior misfired on a pass to Hunter Renfrow, who accidentally batted the ball up in the air. Denis feasted on the tipped ball, recording his third interception of the year.

But, for the second time in the game, BC failed to score off a turnover. The Eagles wouldn’t find the end zone until their next drive. Michael Walker returned a Tigers punt straight up the middle for 27 yards to the Clemson 37 yard-line. To keep the drive alive, Brown connected with running back Jonathan Hilliman on a wheel route on a crucial 4th-and-2. Soon after that, Dillon rumbled all the way down to the one-yard line. On the next play, the true freshman shot up the gut for his first collegiate touchdown.

Three quarters in, and the game was tied at seven. BC is the first team since a 2014 Georgia squad to hold Clemson to seven or less points through the first three frames. Defensive coordinator Jim Reid’s unit was playing like the Eagles’ top-ranked defense back in 2015. But as soon as the fourth quarter hit, it reverted back to its 2017 self.

Minutes into the final portion of play, the Tigers began to separate themselves from BC. Bryant converted on a critical 3rd-and-9 in Eagles territory, finding Diondre Overton for a toe-tapping 23-yard gain. Immediately after that, Adam Choice rushed for Clemson’s second total touchdown, and its first of four in the fourth quarter.

From that point forward, Clemson simply ran the ball down BC’s throat. Following a series of short run plays on the Tigers’ next drive, Etienne ripped off a 50-yard touchdown. The big plays just kept on coming for Clemson. Ray Ray McCloud returned Knoll’s eighth punt of the game for 56 yards, setting up the Tigers for another score. They only needed five plays. Bryant rushed for his second touchdown of the day, and even though Clemson missed the extra point, the Tigers were now up 27-7.

BC was helpless offensively. Without Charlie Callinan, who was ruled out with a broken foot before the game, and left tackle Aaron Monteiro, who went down early in the fourth quarter, the Eagles were already at a disadvantage. When all was said and done, the Eagles only recorded one first down in the final 15 minutes of play.

For the third game in a row, Addazio pulled Brown—this time, for an undisclosed injury. Darius Wade didn’t fare any better. The graduate student’s second and final pass of the game was picked off by A.J. Terrell. Taking advantage of the turnover, Swinney called four-straight running plays for Etienne. The freshman single-handedly carried the Tigers into the end zone.

Saturday’s loss marks the sixth time in the last two seasons that BC has lost by 27 or more points to an ACC opponent. The Eagles might have held their own for three quarters, but there are no brownie points in this conference. Only wins and losses.