On any given weekend afternoon, the Boston Common is a relatively tame place. Parents and children stroll through the park, dogs chase after one another in the grass, and the occasional skateboarder rides down a paved pathway. Last weekend, however, the ordinary scene on the Common was replaced with a higher energy event, and if you happened to pass by, you might’ve noticed the smell.

The 28th annual Boston Freedom Rally, commonly referred to as Hempfest, transformed the Common into a paradise for thousands of cannabis enthusiasts of all ages.

The event was hosted by The Massachusetts Cannabis Reform Coalition, the state affiliate of the National Organization for the Reform of the Marijuana Laws (MassCann/NORML). The organization is dedicated to building a “consensus for a more moral and rational public policy regarding all uses of the cannabis plant,” according to its website.

“Our organization is a public education organization,” said Bill Downing, a Member Liaison for MassCann/NORML and one of the organizers of the rally. “So our primary directive, to steal a line from Star Trek, is to educate the public about all aspects of the cannabis plant. So we have a political and education rally event year on Boston Common.”

This was the first year that the rally was held as an all-weekend event, extended in celebration of the legalization of marijuana in Mass. in 2016, according to a speaker at the event.

According to Downing, however, organizing the event in Boston has been a challenge year after year.

“The city has no good reason not to like our event. We bring in lots of money into the city and we’ve never had any problems with our event,” Downing said. “But the city really does not like us. And they treat us with extreme discrimination, and not good discrimination, bad discrimination.”

Over the last 28 years that the rally has been held, its organizers have had to sue the city of Boston six times to obtain a permit, and have worked directly with the American Civil Liberties Union, according to Downing. The courts ruled in favor of the Freedom Rally all six times, allowing the event to proceed.

Although MassCann/NORML didn’t have to take legal action against the city this year, Boston’s government still made the permitting process as inconvenient and difficult as possible, according to Downing. The city made many demands of the organization, such attempting to require it to hire police to be on hand at the event to arrest marijuana users, he said.

“The Boston Parks and Recreation Department has legally challenged this event for years going back to the 1990s, as recently as last year,” said Ryan Woods, the director of external affairs for the Boston Parks and Recreation Department, in an email to The Heights. “This is not an event that we endorse, as it is a direct affront to the enacted smoking ban in City parks including Boston Common that was passed back in 2013.”

Woods noted that the City of Boston accommodated MassCann/NORML’s request to extend the event to three days, but imposed additional noise and size limitations for Friday, and more trash and clean-up requirements to mitigate the event’s effect on the Common.

Although Woods described that the event is “clearly not in line with the cultural events that we present in our parks,” he also maintained that the city government “must respect the court’s decision and the First Amendment rights of the participants.”

Although it is illegal to smoke marijuana in public, no arrests were made or citation issued last weekend, according to The Boston Herald.

The three-day rally featured two main stages where a multitude of bands performed throughout the weekend. Speakers, activists, and marijuana entrepreneurs alike also took to the stages to speak to the crowds about the push for legalization nationwide and current events in the cannabis world.

Outside of the stage areas, rows of tents created a diverse marketplace, where vendors offered everything from cannabis-themed apparel and smoking supplies, to THC-infused pastries and lollipops. Other salesmen roamed the grounds or set up their wares on green park benches, offering edibles in enough different snack forms to fill the average home’s pantry.

The non-weed munchie offerings were aplenty as well, as a section of food vendors straight out of your local state carnival enticed rally-goers with offerings such as corn dogs, funnel cake, and fried oreos. Many types of international cuisine were present as well, ranging from a stand offering sizzling Thai chicken skewers and lo mein, to a taste of Italy in a classic cannoli shop that stuck out among the crowd.

Among the various venders, a pickup truck was parked with a sign reading, “22 VETS DEAD on Legal Meds Every Day!” In the back of the truck were 22 fake body bags with an American flag resting on top.

“It’s to bring attention to the veterans situation that is suicide on an epic level, at 22 right now a day,” said Chris Mueller, owner of the vehicle and an Iraq War veteran. “And that’s a low-end number of the states that actually do keep track of the veterans suicide by pharmaceuticals.”

Mueller plans on driving his truck to every state capital to bring further awareness to the issue and the ways in which cannabis can be used as a medication for suffering veterans. He hopes the alarming image of body bags in a truck will do just that.

“I thought of something that would just shock and awe people … that will bring attention to it and people will be talking about it,” he said. “They wanna know what it is, why it’s there, and then they’re gonna bring up more questions, ‘Why is it that only he is the one bringing it to our attention and not the leaders that we pay to take care of us?’”

On Friday, attendees of the rally laid out in the grass and on blankets throughout the Common. Many congregated along the sides of the hill surrounding the Sailors and Soldiers Monument, escaping the afternoon sun in the shade. Clouds of smoke arose from the scattered groups of seated Bostonians, and filled the air with an unmistakable aroma.

The event wasn’t all fun, games, and weed smoking, though. Much of the focus at the Freedom Rally was centered around innovative and responsible uses for cannabis.

Many medicinal organizations were present at the event, including multiple Registered Marijuana Dispensaries (RMD), who were there to showcase their products, speak about the benefits of medicinal marijuana use for a variety of afflictions, and explain to interested people how to obtain a medical marijuana card. Other groups, such as a marijuana purity testing lab and a team of doctors specializing in marijuana medicine, also had booths at the rally.

One section of the sprawling event on the Common featured “Education Village,” where viewers could learn about the discrimination against cannabis throughout history and the multitude of uses for marijuana other than recreation. A tented exhibit featured vintage anti-marijuana propaganda and Freedom Rally posters from years past.

Also contributing to the rally’s theme of education were organizations in attendance that teach people about the many potential and responsible uses of cannabis. One such group, the New England Grass Roots Institute, offers classes in areas ranging from how to successfully grow cannabis, to how to cook using the plant.

Educating the public about the criminal issues that stem from the illegality of marijuana is also one of the goals of the event. Downing hopes that the Freedom Rally will help contribute to the national push for legalization, which he believes is necessary to reduce racial discrimination within the American criminal justice system.

“We’re hoping to reduce the racial disparity among arrests,” he said. “The marijuana laws are used as a means of social control, and that’s mostly against people of African American and Hispanic subcultures or cultures … Marijuana law enforcement is done is a racially discriminatory manner.”

A variety of logos and symbols featuring the cannabis leaf decorated the Common last weekend, but one stood out in particular: the MassCann/NORML logo. Beside the cannabis leaf, the symbol of a minuteman—a member of the militias who fought during the American Revolution—is prevalent.

The people organizing and attending the Freedom Rally see themselves as fighting for a fundamental right, the liberty to grow and consume cannabis. And there is no better place right now than Boston to make that case. 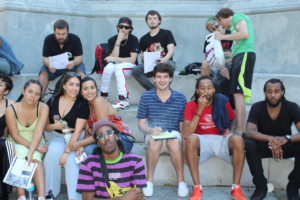