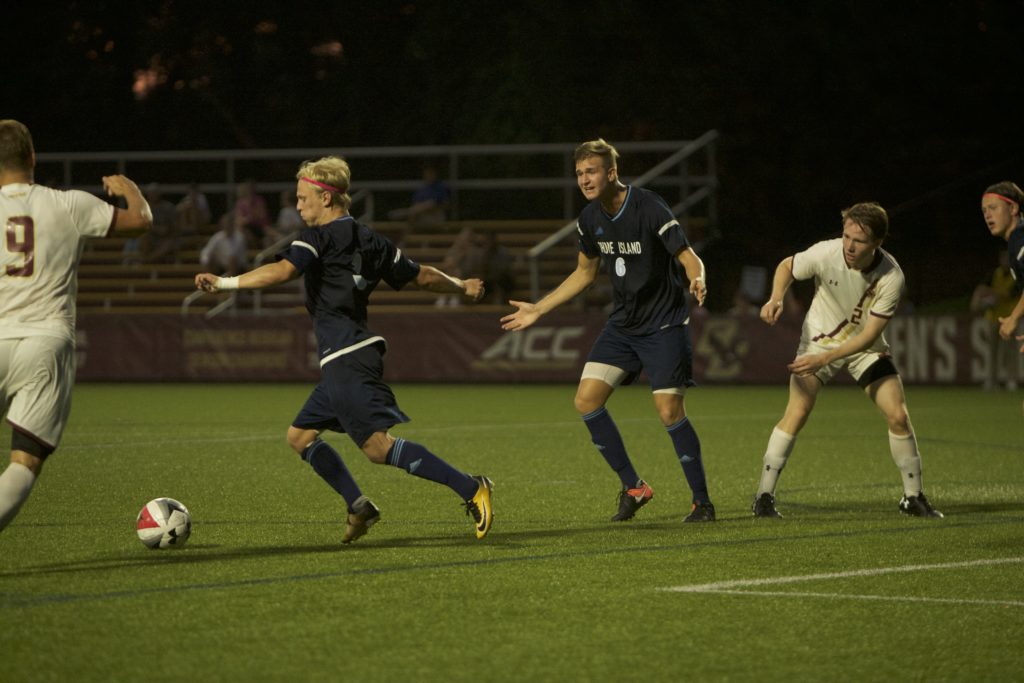 BC’s Belated Aggression Proves Too Little, Too Late Against URI

Boston College men’s soccer looked like the student who procrastinated and left an assignment for the final 30 minutes before it’s due.

It wasn’t until Rhode Island made it 2-0 in the 59th minute that the Eagles, desperate to inch their record back up toward .500, came alive on the offensive end. Younes Boudadi sent a curling cross that found the foot of Beto Luna for the freshman’s second career goal in the 69th minute.

As the clock trickled down, head coach Ed Kelly and BC grew tired of the Rams dropping 10 defenders behind the ball, as they had done all evening. So the Eagles went all-in for the game-tying goal and pushed their defenders forward, crowding the box with big bodies like center back Tommy Gudmundsson.

With four minutes left, BC’s attackers combined for a picture-perfect passing sequence that seemed destined to be the equalizer. Luna ran a brilliant route over a slow cross, hopping over the ball and then getting it back from Adam French’s give-and-go pass. Instead of shooting, though, the forward flicked it back into the middle of the box, where a URI defender deflected the ball out of bounds before French could finish the play.

It was the closest of 12 chances that the Eagles had after the 59th minute, when Rams’ took a 2-0 lead on Chae Bergman’s one-timer. Despite a flurry of shots by BC in the waning minutes of Tuesday’s match, URI held on to secure a 2-1 victory in Tuesday’s match at Newton Campus Field.

In the first half, both sides subscribed to a defensive-minded approach. Henry Balf connected on a header in the 33rd minute, but Rams goalkeeper Nils Leifhelm made a diving save to his right.

While URI (4-2-2) never rushed to push forward, it did take advantage of set pieces and counterattacks. In the 38th minute, Peter Kristiansen sent a corner into the box that tipped off two of his teammates and past Antonio Chavez Borrelli for the 1-0 lead.

The Rams increased their advantage in the 59th minute, this time on a counter following a free kick. The Eagles (3-6) left Chae Brangman open in the box, and he made them pay with a textbook finish.

Luna’s nifty work up top nearly completed BC’s comeback and sent the game to extra time, but it was ultimately too little, too late for Kelly’s squad. And, in the coach’s assessment, too much timidness and, yes, unselfishness, around the box.

“We did nothing up until we went down 2-0,” Kelly said. “I think it goes back to when we beat BU and Quinnipiac and we passed the ball all over the place. And now we’re in trouble, and you can’t play like that.”

Going into intermission with a deficit doesn’t help either. The Eagles haven’t won a game when trailing at halftime since Sept. 20, 2016, when Zeiko Lewis and Max Schulze-Geisthovel—two of their best goal scorers in 2016 who are now gone—each scored a pair of goals in a 5-3 win over Albany.

The supposed beauty of the 2017 team was that the absence of those two playmakers wouldn’t have to be filled by one or two guys. Rather, a collective unit that Kelly called one of his deepest rosters ever could fill that gap. But the tradeoff is that, without a bonafide No. 1 threat, BC gets too cute in the attacking third and struggles converting against conservative defenses. Simon Enstrom has been that guy for the Eagles at times this season—just not during ACC play.

Until that changes, or they really do fill the cleats of Lewis and Schulze-Geisthovel by committee, they’ll be playing catch-up for the rest of the season with their aggressive conference opponents.