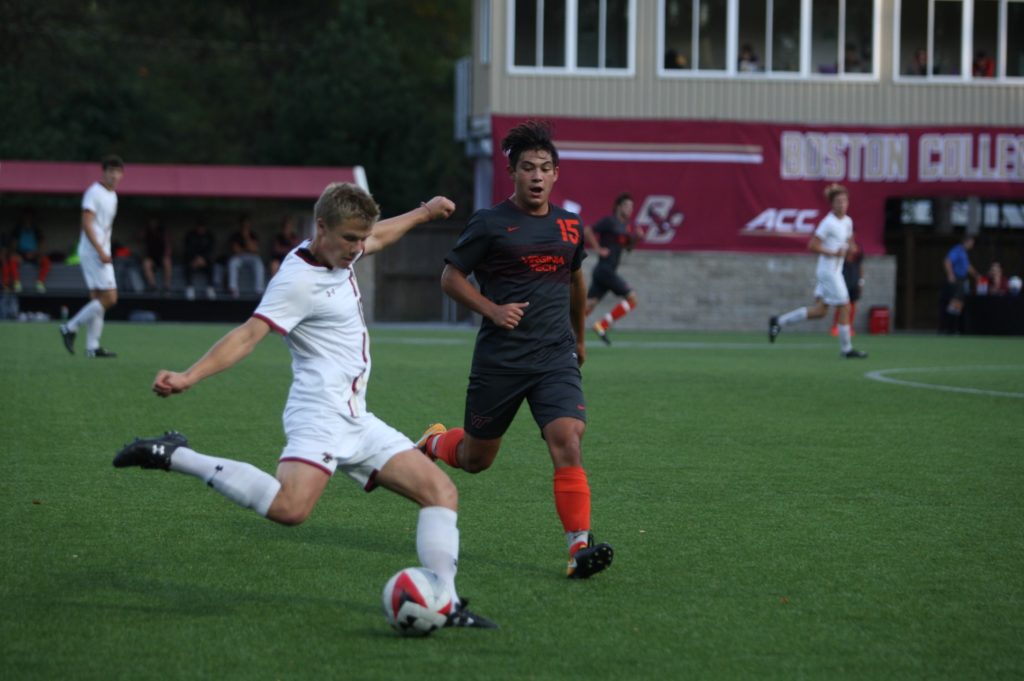 Eagles Remain Winless in ACC With Loss to Virginia Tech

Strickler received a pass from Hokies (6-4, 2-2) forward Marcelo Acuna, sidestepped a stumbling Eagles defender, and unleashed a right-footed curling shot. It dropped in, just out of reach of BC goaltender Antonio Chavez Borrelli, who recorded two saves on the evening.

“We played really well,” head coach Ed Kelly said, “But we gave up another stupid goal. Our keeper had one great save, but it’s not like he made 15 saves and kept us in the game. We should be playing overtime. We’re just not scoring goals.”

The goal to open up the second half gave Virginia Tech the chance to “park the bus,” ultimately leaving just one attacker up in a successful bid to deny the Eagles an equalizer. Hokies keeper Ben Lundgaard pulled in six saves to preserve the shutout, ending a 12-game losing streak against the hosts that dated back to 2005.

BC had plenty of chances to find the back of the net, piling up nine corner kicks and nine shots in the second half. Each time they reached the box, however, headers and shots would go high and wide, or the abundance of Hokies defenders would get a foot on it and clear it out.

“They’re all back there and it’s just the nature of the game,” Kelly said of the Hokies defensive tactics. “You’re getting pressured and you go into the other mode of defense. We played hard and the character showed, even in the last few minutes we had chances.”

The last scoring opportunity for the Eagles came with 36 seconds left, as Tommy Gudmundsson headed a ball up into the box. BC’s Beto Luna jumped up and got a head on it, but it was down and to the right, within reach of a sliding Lundgaard. In a microcosm of the Eagles season, Luna came down hard, and left a lasting image of frustration as he slapped the ground with his hands before cupping his head.

There were positives, as the Eagles saw the return of defender Joshua Forbes from injury. Forbes, a physical and quick defender, frequently shut down the Hokies’ opportunities on the attack. In the first half alone, he drew two fouls within the Eagles penalty box, completely flipping the direction of play, and headed off several crosses.

“He did a fantastic job,” Kelly said. “We also put Heidar [Aeigsson] back there. He’s usually in the midfield, but we wanted to have him back there because we’ve been giving up some silly goals. We wanted to get some of the guys involved in that out of the pressure cooker.”

The first half was a prime example of BC’s defensive strengths. The combination of Forbes, Aegisson, Gudmundsson, and Raphael Salama swallowed up the majority of Virginia Tech shots early. The biggest chance the Hokies had in the opening 45 minutes came on a header in the box from injury substitute Will Mejia. Mejia rose up and got his head on a cross up in the box, but the ball was directed straight down and Chavez Borrelli had no problem falling on it.

The Eagles, meanwhile, had a few chances up top. Simon Enstrom worked against a physical backline to create a few shots, his best early effort coming as a low shot to the bottom corner. Luna also added a well-struck volley from just outside the box, but it was directed straight at Lundgaard.

In the second half, it was more of the same. The Eagles had plenty of corner kick chances, and Enstrom had a few good shots, including one that was tipped just over the crossbar by Lundgaard. Henry Balf nearly scored as well, one-timing a rebound from a corner kick just wide to the right.

The best, and really only serious, chance for the Hokies in the second half came on a hard left-footed shot from Acuna. Fed on a 3-on-2 fast break, thanks to a throw from Lundgaard, Acuna took it all the way in himself. An excellent diving save from Chavez Borelli prevented the potential insurance goal, however.

Ultimately, it was more of the same for the Eagles. They outshot Rhode Island in their last game, 26-10, but fell 2-1 in overtime. Offensive struggles and the occasional breakdown in the back line has proved costly, as they sit four games under .500 and in a precarious position.

Winless in the ACC, the BC faces a daunting schedule ahead. Looming large are conference matchups against No. 10 Virginia, No. 21 Syracuse, and No. 2 Wake Forest. Since they don’t play until next Friday, the Eagles will look to get their full complement of players back.

In the end, it was one moment that BC wished it could get back.

“They had a chance they never should’ve had,” Kelly added. “There’s no other way to look at it.”