Home » BC Bounces Back With Dominant Win Over New Hampshire 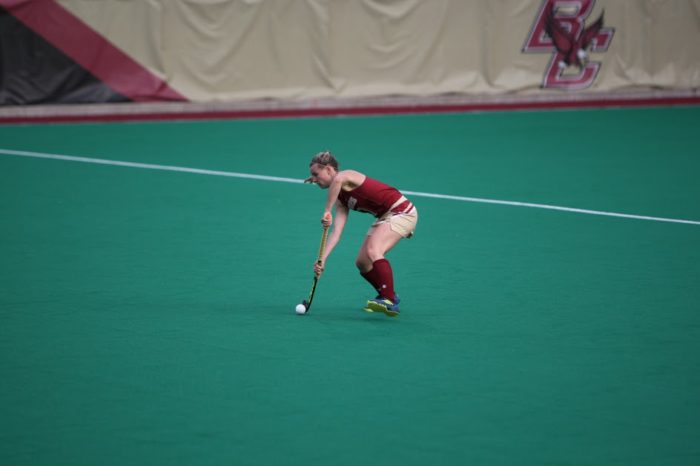 BC Bounces Back With Dominant Win Over New Hampshire

A save from goalkeeper Sarah Dwyer as time expired sealed a 4-0 shutout win for Boston College field hockey and capped off a game the Eagles dominated on both ends of the field.

The University of New Hampshire (4-6, 3-5 America East) put up a fight, only losing the shot battle 14-9 to No. 9 BC (9-4, 0-4 Atlantic Coast), but the Wildcats were behind the eight ball early. After New Hampshire conceded a corner, forward Brooke Matherson fired home her team-leading fifth goal of the season to give the Eagles the lead a little over three minutes into the game.

UNH responded well, forcing a save from Dwyer off of a corner two minutes later, but found itself pushed back into its own circle to fend off BC for much of the first half. It did force two more saves from the Eagles’ steady goalkeeper, but after earning another corner 28 minutes in, BC was poised to strike once more. Midfielder Brigid Wood’s shot was saved by Wildcat goalkeeper Kelsey Rudert, but the rebound eventually found its way to forward Catherine Warner, who scored her fourth of the season, putting BC up 2-0 going into the second half.

That scoreline didn’t hold for long, as the Eagles came flying out of the gates again. Just four minutes into the half, midfielder Alesandra Miller forced another corner from which Fusine Govaert notched her fourth goal of the season to earn BC a healthy three goal lead.

Even with such a big edge, the Eagles didn’t let up. Although UNH’s defense tightened up enough to keep the ball out of the net for the next half hour, BC managed to force two more corners to bring the Eagles’ total to seven over the Wildcats’ four. BC also pressed its way to nine shots on goal to UNH’s five. The Eagles’ final shot came with just a minute to go on the breakaway as the Wildcats pushed their team forward to try to prevent a shutout. Forward Caroline McGovern found herself one-on-one with Rudert on the end of a clearance out of the BC circle, and made no mistake, rounding Rudert and finding the back of the now-open cage before the UNH defense could reset itself. It was her third goal of the year.

At 4-0, the game was clearly in hand, but the Wildcats pushed forward one final time, forcing Dwyer’s fifth and final save of the game on UNH goal and point leader Katie Audino with three seconds to go, leaving UNH with one final corner in the game’s dying moments to try to get on the board. The Eagles blocked the final effort away, and the horn sounded on one of the team’s best performances of the year.

Head coach Kelly Doton must have been looking for a bounce back performance after a shootout loss to No. 2 Duke, and BC’s effort in New Hampshire certainly qualifies as such.