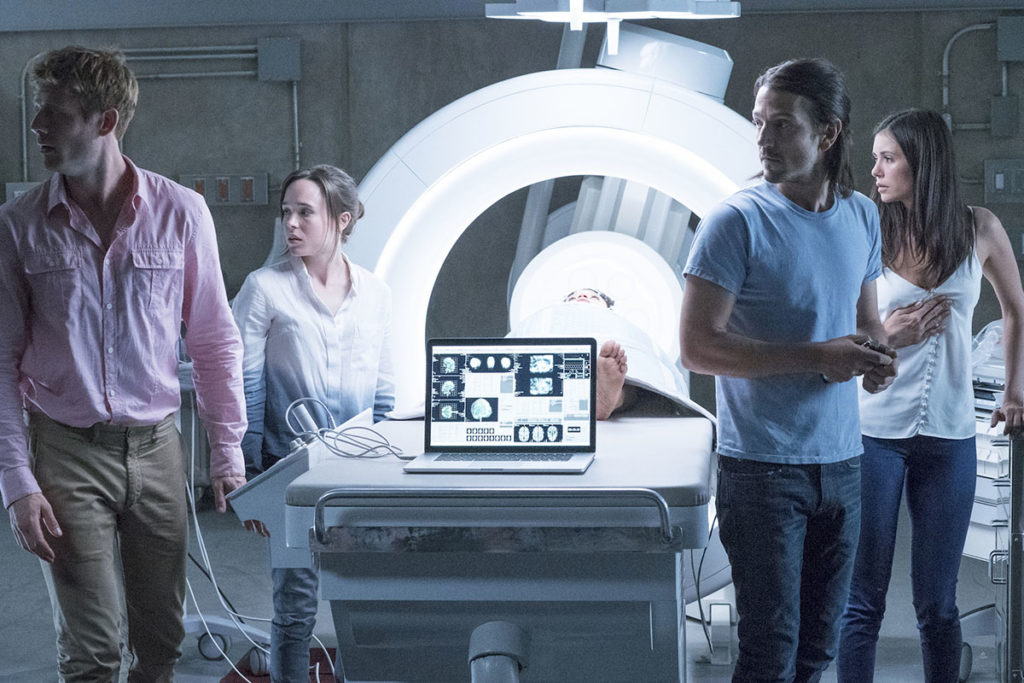 Flatliners lives up to its title in the most unfortunate way possible. Although one could make the argument it doesn’t entirely flatline, because in order to do so, something must have a pulse at all. But this mundane attempt a horror thriller certainly lacks one. It seems as though it is time for yet another wholly unnecessary remake of a ’90s movie that was not all that great to begin with but somehow still managed to be entertaining because of its cast and the way it embodied the era.

Flatliners tells the story of five medical students who stop their hearts for brief periods of time in order to access more of their brains in those post-mortem moments. This process becomes referred to by the group as “flatlining.” “Flatlining” apparently grants the students the ability to access more of their mental capacity, granting them special powers like baking and piano, as well as allowing them to excel in their challenging medical courses. The downside to this is every member in the group has committed some wrong in his or her past. Each comes back to haunt each of the “flatliners” in a most non-frightening fashion. The questions of what haunts the characters, why, and what flatlining has to do with each member of the group being terrorized by his or her past misdeeds go unanswered throughout the film.

The film is really about the intricacies of each character. Leading the group in the flatlining endeavor is a young woman named Courtney, played by Ellen Page who gives what is the most compelling performance of the film. Since her breakout performance as a pregnant teenager in 2007’s excellent indie sleeper hit Juno, Page’s career seems to have been rather dormant. It’s a shame that her talent goes wasted in a film that is as dull as the washed out blue-gray color palette that seems to permeate most of its scenes. Page portrays the grief and guilt she feels because of an accident her character caused and possesses enough charisma to make it believable that she could convince her fellow med students to stop her heart and then revive her.

The second strongest member of the ensemble is Diego Luna as the most competent “doctor” among the students because he believes flatlining is a bad idea. Luna, who has appeared in a variety of films from the Mexican arthouse coming of age road movie Y Tu Mama Tambien to starring in the underrated first cinematic outing into the Star Wars expanded universe Rogue One, provides some dramatic anchoring for the film. He even manages to make lines like “you’re really hot” in the film’s attempt at a romantic scene not sound completely ridiculous.

The rest of the ensemble leaves much to be desired performance-wise including the clichéd characters of the tightly wound type-A med student who spends all her time in the library (Kiersey Clemons) and the wealthy playboy (James Norton) sailing through medical school on his parents trust fund (he literally lives on a yacht). Most unlucky of the ensemble is The Vampire Diaries’ Nina Dobrev who is both the least likeable character and is given little more to do then trade flirty looks with Luna, with whom she has very little chemistry, and talk in a quivery whisper as creepy things, or at least things the film wants to be creepy, start to happen.

Kiefer Sutherland also appears in Flatliners as a veteran doctor in a nod to his role in the original. Sutherland sports a mane of slicked back grey hair and a cane he bangs emphatically as he growls at his medical students’ mistakes. Needless to say none of these choices do his performance any favors. Luckily none of the the other cast members from the original decided to go slumming in this remake.

Acting aside the film’s greatest problems come from its screenplay and lack of direction. On paper the creative team behind the Flatliners remake sounds quite promising. Director Niels Arden Oplev made the far superior Swedish-language film adaptation of The Girl with the Dragon Tattoo meanwhile screenwriter Ben Ripley penned the underseen, but absolutely fantastic sci-fi thriller Source Code. However, no semblance of the writer or the director’s credentials is evident in this film. Along with the awkward dialogue the screenplay is loaded with medical jargon including names of different drugs and anatomy of the brain that is totally incomprehensible for anyone this side of orgo. In addition, any semblance of coherence in terms of what is happening and why dies within the first twenty-minutes of the film and is never revived. By the time Flatliners reached its forced and hurried ending that came far too easily, viewers might worry that they may flatline themselves—from boredom.