Peter Markell, BC ’77, Officially Selected as New Chair of Board of Trustees

Peter Markell, BC ’77, was officially selected on Friday as the new chairman of the Boston College Board of Trustees at the trustees’ annual fall meeting, succeeding outgoing chairman John Fish. Via The Chronicle, BC also announced five additions to the board.

Markell received his bachelor’s degree from BC in accounting and finance, and serves as the executive vice president of administration and finance, CFO, and treasurer for Partners HealthCare System. He oversees a $12.5 billion operation and is responsible for all finance, treasury, real estate, human resources, information systems, and research management areas.

Before going to Partners, Markell held leadership positions at Ernst & Young, LLP, where, in 1989, he implemented the merger of Ernst & Whinney and Arthur Young.

The board also selected Joseph “Jay” Hooley, BC ’79, the CEO and Chairman of State Street Corporation, as its new vice chair, and Susan Shea, BC ’76, president and founder of Dancing with the Students, as secretary.

Brown, the CEO and vice chairman of Sage Products LLC, has 36 years of experience in the health care industry. Brown joined Sage in 1981 and in 2006 was promoted to president and COO. Six years later, Sage was sold to Madison Dearborn Partners and Brown was appointed CEO.

Brown is an active philanthropist in health care, education, and various youth programs. He earned his bachelor’s degree from BC in finance and marketing.

Connell’s parents have a history with BC. His mother, Margot Connell, is a trustee associate, and his late father, William Connell, BC ’59, served as a longtime trustee, was formerly the board’s chair, and received the Ignatius medal in 2001. Connell graduated with a bachelor’s degree in English and went on to earn his MBA from Harvard Business School. His father is the namesake of the Connell School of Nursing.

Marcouiller has been based in Rome for three years and serves the Society of Jesus as general councilor and the Superior General’s assistant for Canada and the U.S. He taught economics at BC before becoming the Missouri Province provincial superior in 2009. Marcouiller has earned degrees from Princeton, Yale, the University of Texas, and the Weston Jesuit School of Theology, which is now the School of Theology and Ministry at BC.

Morrison, who is ranked among Fortune’s 50 Most Powerful Women in Business, currently serves as the president and CEO of Campbell Soup Company. Morrison began her career at Procter & Gamble and has held leadership positions at Pepsi-Cola, Nestle, Nabisco, and Kraft Foods since. She currently serves on several boards of directors and was on the Obama Administration’s Export Council. Morrison graduated BC with a bachelor’s degree in economics and psychology.

Morrissey is a partner with Morrissey, Hawkins & Lynch, a Boston based law firm. He received his bachelor’s degree in History, and began his career as a licensed bond broker before attending law school. In 2002, he was admitted to the Bar of the Commonwealth of Massachusetts, and a year later, to the Bar of the State of Florida. His father, Robert Morrissey, BC ’60, is the current Investment and Endowment Committee chair for the Board of Trustees and is the namesake of the Morrissey College of Arts and Sciences, which was renamed in 2015 following the largest contribution in BC’s history. The gift was unrestricted but its terms have never been disclosed.

board of trustees peter markell jay hooley
When Eagles Come Together: TU/TD
Social Activist Promotes Body Positivity with ’10 Tools for Radical Self Love’ 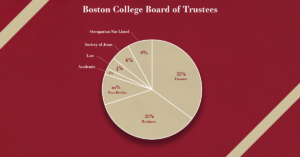 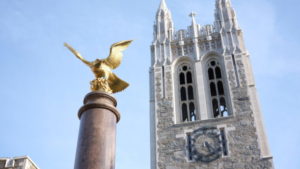