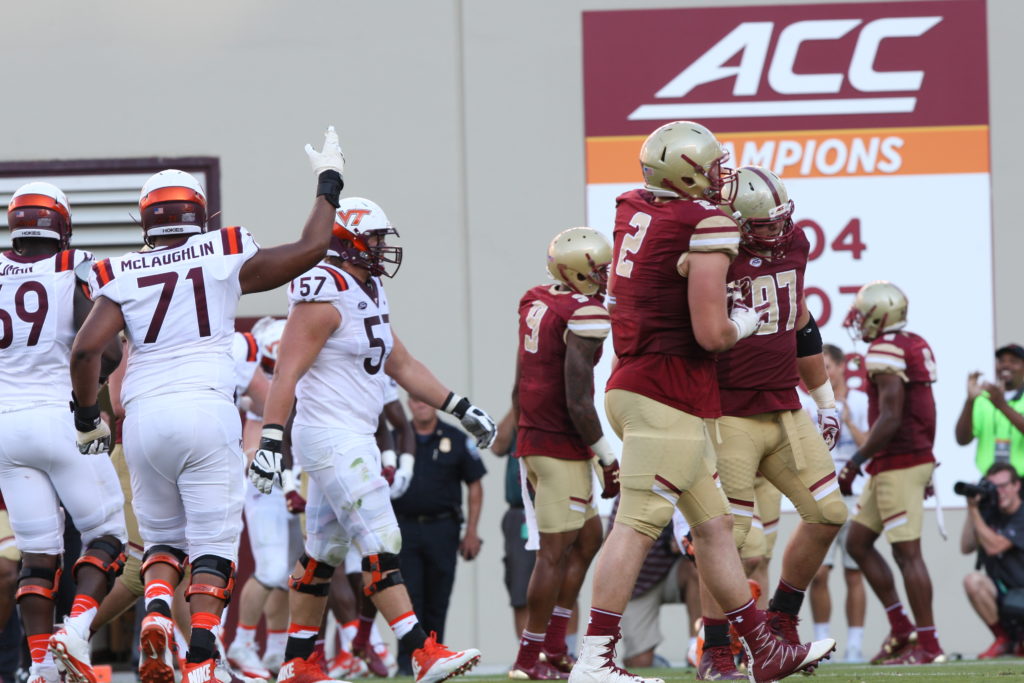 In 2016, Boston College football lost four games by at least 38 points. None of which were more embarrassing than the Eagles’ 49-0 defeat in Blacksburg, Va.

Virginia Tech was 20 yards shy of quadrupling BC’s total offensive output. Quarterback Patrick Towles was held to 80 passing yards, and the entire Eagles backfield combined for just 44 yards on the ground. Drive after drive, BC’s offensive sputtered, ultimately punting deep in its own territory. The Hokies capitalized, rattling off four touchdown drives of less than 60 yards.

The 49-point shutout is the Eagles’ worst loss under head coach Steve Addazio. But according to the fifth-year man, that game is in the rear-view mirror.

“We went down there in a pretty hostile environment, and we got beat,” Addazio told reporters during Monday’s press conference. “A lot of people got beat. Do I think you sit there and dwell on a game? No.”

Unfortunately for BC, there is no telling that the same thing won’t happen again on Saturday.

Defensive coordinator Bud Foster’s unit is only giving up 14.4 points per game—tied for 12th best in all of college football. Not to mention that No. 16 VT shutout two of its first five opponents. BC, on the other hand, is averaging a mere 17.6 points per game. And if it wasn’t for three monster punt returns and a porous Central Michigan run defense, that number could very well be a few ticks lower.

Despite the lack of scoring, the Eagles’ run game has improved each week. Over the course of the first two games of the season, Jonathan Hilliman totaled just 81 rushing yards. Since then, he’s racked up 244 yards and three touchdowns. His mentee is coming along too. A.J. Dillon’s workload has increased every game this year. In the season opener, the true freshman got five touches. Last week alone, he carried the ball 25 times for 120 yards and a touchdown. Thanks to a bit of continuity on the offensive line, both backs have finally found some holes in between the tackles.

But the passing game is as inconsistent as ever. Last week, quarterback Anthony Brown was 16-of-21 for 85 yards—about half his normal production. After the game, Addazio said that the redshirt signal caller had missed practice all week with a shoulder injury that he sustained in the fourth quarter against Clemson. So going into the game, Addazio knew that he wanted to keep Brown’s pass attempts to a minimum. But when he did drop back to pass, it wasn’t always pretty.

Brown averaged a shade over four yards per pass attempt against the Chippewas. And when he did take a shot downfield, he often ended up on the ground. One week removed from being hurried 10 times, Brown took two roughing the passer penalties on Saturday. Pass protection is still a work-in-progress for BC’s makeshift offensive line. And Addazio says that’s part of the reason why the play-action passing game—the staple of the Eagles’ air attack during preseason camp—has stalled, especially when Brown is trying to throw the ball 20-30 yards downfield.

“Sometimes we’ve got a misread, sometimes we break down in protection … We’d like that to be better than it is right now,” Addazio said.

Addazio is hoping that, for the first time this year, all five starting offensive linemen will have a full week of practice together. With the Hokies coming to town, they’ll need every bit of it.