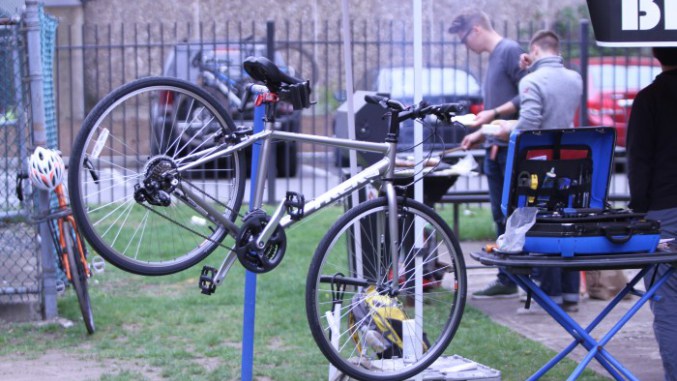 Boston College students will now have the option to rent bikes on the Newton Campus, courtesy of the bike-sharing program founded by Bike BC. There will be 10 bikes available to rent on Newton. At the present moment, only five of them can be checked out, but the other five will be available very soon, according to Bike BC president Ben Li, CSOM ’19.

The bikes are available for rent through the Law Library, but any BC student, undergraduate or graduate, can check them out as long as they have a student ID.

The bike-share program has been operating at BC for about a year now, with bikes available in the Commonwealth Ave. Garage for students to check out through the O’Neill Library. After a successful start, Bike BC decided that an appropriate next step would be to take the program to Newton Campus.

“We received requests in the past from students who lived [on Newton] that they wanted to see [the bike share program] happening there,” Li said.

To check a bike out on Newton Campus, students should go to the circulation desk on the main floor of the Law Library and ask them for a bike. There, they will receive a box containing a key and a set of lights, and a helmet. The box will have a number on it which corresponds to the number on a bike that can be found on the rack in front of Duchesne Hall. The student can use the bike for the next three days.

To be eligible to use the bike-sharing program, students must go through an hour-long training course hosted by Bike BC. During the training, students learn the logistics of checking the bikes out, traffic laws, and safety tips for biking in the Boston area. So far, the Bike BC program has certified over 270 total students to check out bikes through the library.

To return a bike, a student must lock it where they picked it up, whether atis the Commonwealth Ave. Garage or Duchesne, and then return the box where they received it. The program is completely free for students.

Bike BC, which began as a club where students could participate in group rides, initially started the bike-share program as a way to encourage biking as a means of transportation in and around BC. Over the past year, interest in bikes as a means of transportation has increased among BC students, Li explained. The majority of students riding bikes use them to commute—either to Newton, off-campus housing, or community service activities, Li said.

The addition of the 10 bikes to Newton will be helpful because when freshmen first come to campus, they usually don’t bring their bikes with them and they also haven’t started the process of buying a new one. Before they start looking into other types of transportation, Bike BC wants to show them that bikes are an option, Li said.

Li explained that biking between the two campuses can actually be much more convenient than taking the bus. If you have a bike, a 10- to 15-minute commute time from one campus to the other is guaranteed. Taking the bus in the morning could take students much longer—on account of the fact that they need to wait for the bus to arrive, sit in traffic once they are on the bus, and walk to their destination from the Main Gate where they are dropped off.

Biking is also a way to get some exercise and experience fresh air, and at the same time help the environment, Li pointed out.

“In a way, we are trying to promote a culture, rather than just simply providing 10 bikes … [Bike BC] is not just based on an activity,” Li said. We’re based on this mission to make the campus, and also the world, more sustainable.”

Bike BC’s mission to promote a more sustainable culture is how last year they received the Legacy Grant from BC, a $5,000 reward given to innovative projects that serve others or inspire change. This grant is what allowed them to add the 10 bikes to Newton Campus and also build a repair station that has all the tools needed for small bike tuneups, which is located in the Commonwealth Ave. Garage and open for all members of the public to use.

Bike BC’s vision for the future is that they might be able to one day bring the “dockless” model, which has been adopted by many major cities, to BC’s campus. With this model, riders can use a shared bike wherever they see one by simply scanning a QR code to unlock it. This would help students travel shorter distances around campus without having to worry as much about checkout and return. Li explained that before this can be made possible, however, students need to make their voices be heard that there is a need for such a program.

“Our first step is to make students more aware and interested in biking … The next step is that actually people start riding…and then we can say that as a school, we are trying to really protect the environment and to be sustainable,” Li said.