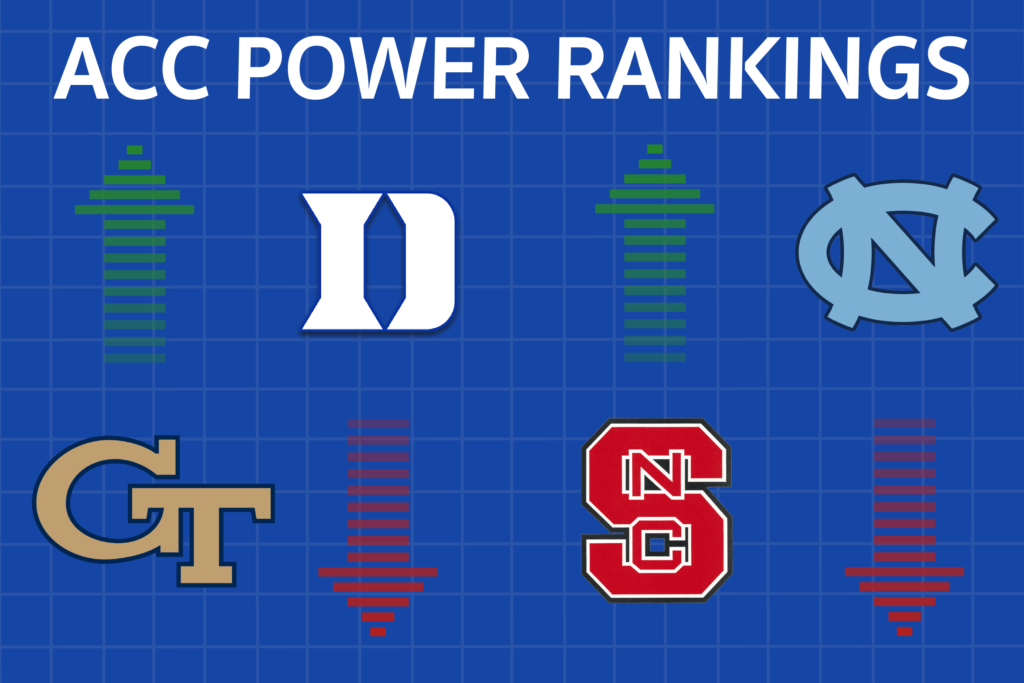 Virginia Tech, Duke, and Wake Forest had a chance to make a statement on Saturday. All three teams entered Week Five undefeated with an opportunity to take down a handful of the ACC’s top programs: Clemson, Miami, and Florida State, respectively.

But not one of them capitalized. The Hokies got off to a sluggish start, the Blue Devils’ offense was non-existent, and the Demon Deacons couldn’t finish in the fourth quarter. Prior to the weekend, a couple of these teams were in the conversation to make a run for a conference title or at least a top-tier bowl game. But now, with a one in the loss column, most of that noise has died down.

Clemson and Miami are the only two remaining undefeated teams in the ACC. But because the Hurricanes have played an abridged schedule thus far, the Tigers sit atop the conference with an unblemished 5-0 mark. After their win in Blacksburg, Va., Clemson is looking like a sure bet to come out of the Atlantic Division. But figuring out the rest of the ACC is anyone’s game.

Last week against Boston College, Clemson needed three quarters to find its footing. That wasn’t the case this time around. Head coach Dabo Swinney’s team scored on its first two possessions of the game—the second of which took all of 80 seconds. All game, Clemson’s defense terrorized the No. 16 Hokies’ offensive line. The Tigers hurried VT quarterback Josh Jackson six times and brought him down for the sack twice. To add insult to injury, Clemson forced three Hokie turnovers. After this one, it’s pretty clear that no one else in the ACC is on Clemson’s level.

The last time Miami was in Durham, N.C., it needed a miraculous, eight-lateral kickoff return to knock off Duke. Fortunately for the Hurricanes, it didn’t come to that on Saturday. Even without a strong performance from lead running back Mark Walton, Miami dominated offensively in its 31-6 victory. Quarterback Malik Rosier got off to a fast start and never looked back. The junior finished with three scores (two passing, one rushing). Miami’s defense was equally impressive, routinely shutting down the Blue Devils on both third and fourth down. With a balanced attack and a loaded defense, the Hurricanes are formidable.

Following three-consecutive blowouts against non-Power Five teams, VT was thrown back into ACC play when it hosted No. 2 Clemson on Saturday. The Hokies weren’t ready. For the first time all year, Jackson was turnover prone. Under constant duress, the redshirt freshman threw a season-high two interceptions. The Hokies finished the game with three turnovers and just 17 points—23 shy of their season average. On the bright side, VT gets BC this week, a team gave up a combined 117 points to Wake Forest, Notre Dame, and Clemson.

Louisville did what it needed to do against Murray State. The Cardinals poured on 55 points, including 35 in the first half alone, to cap off their second-consecutive rout of a nonconference opponent. Lamar Jackson recorded 349 yards of total offense and four touchdowns (three passing, one rushing) in just over one half of play. Defensively, Louisville one-upped last week’s performance. The Cardinals held the Racers to a mere 80 yards of total offense—70 less than they allowed against Kent State in Week Four. It’s back to reality when Louisville takes on No. 24 North Carolina State on Thursday night.

For the first time in 11 years, NC State is 2-0 to start ACC play. Quarterback Ryan Finley got a breather on Saturday, as the Wolfpack finally got their run game going against a Power Five opponent. Nyheim Hines and Jaylen Samuels ran all over the Syracuse defense. As a team, NC State totaled 256 yards on the ground. If it wasn’t for a late Eric Dungey comeback, this game would have looked a lot more lopsided. The Wolfpack haven’t turned the ball over once during their four-game winning streak. That’s no coincidence.

Georgia Tech’s mindset is simple: hold the ball and play lights out defense. The Yellow Jackets’ 33-7 win over North Carolina was straight out head coach Paul Johnson’s book. GT controlled the clock, holding the ball for over 38 minutes minutes of the game. On two separate occasions, quarterback TaQuon Marshall led 17-plus play scoring drives. The Tar Heels were gassed by intermission. From then on out, it was the Marshall and KirVonte Benson show. GT’s defense might not get as much attention as the Yellow Jackets’ spread-option attack, but the unit is just as lethal. After Saturday’s outing, GT ranks 10th in the nation in total defense.

It took five weeks, but the Seminoles are finally in the win column. Head coach Jimbo Fisher escaped Winston-Salem, N.C. with a 26-19 victory, avoiding FSU’s first 0-3 start since 1976. But it wasn’t pretty. Quarterback James Blackman was knocked around all day. The true freshman was sacked five times, and didn’t really show any signs of life until the second half. Thankfully for the Seminoles, Blackman hit Auden Tate for a beautiful 40-yard, game-winning touchdown strike with less than a minute to go. Still, unless the offensive line play improves, FSU—which currently averages 18 points per game—will have a hard to finding the end zone in the coming weeks.

Ever since quarterback Daniel Jones’ 400-yard day against Northwestern in Week Two, the sophomore gunslinger hasn’t looked the same. Jones completed just 21-of-42 attempts against No. 13 Miami, and was picked off for the third time in the past four games. The Blue Devils were 5-of-19 on third down and stalled multiple times inside of Hurricane’s 20-yard line. Duke has struggled to punch the ball in the end zone all year. So far this season, the Blue Devils have scored nine touchdowns and kicked nine field goals in 23 trips inside the red zone, ranking them in the bottom third in the FBS in efficiency.

Wake Forest outgained FSU by nearly 100 yards, sacked or hurried Blackman a total of 10 times, recorded 17 tackles for loss, and still came up empty-handed. Overall, the Demon Deacons outplayed their ACC foe, but it was the little things that ended up costing them their fifth win of the season. After scoring its first touchdown of the game, Wake Forest gave up an 81-yard kickoff return to Keith Gavin. Over the course of the next quarter of play, the Demon Deacons committed a pair of turnovers. If Wake Forest makes too many of these kinds of mistakes, its strong start will inevitably slip away.

Syracuse is handling one of the toughest schedules in the country better than most expected. But at the end of the day, hanging with the big boys doesn’t do you any good come January. Like last week, the Orange had a hard to finding rhythm offensively during the first half against NC State. By the time Dungey started to string together scoring drives, it was already too late. Syracuse has what it takes to get a few wins in the ACC. After all, Dungey can go toe-to-toe with any quarterback in the conference. On Saturday, he logged his 18th 300-yard passing game of his career, passing Ryan Nassib for the most in program history.

Virginia had one more week to soak in its 42-23 shocker over Boise State. Out of nowhere, quarterback Kurt Benkert and Co. handed the Broncos their worst home loss since 2001. Before the season, most people, including myself, penciled in UVA to be the worst team in the conference. But with games against Duke, North Carolina, BC, and Pittsburgh over the next four weeks, UVA could very well be bowl eligible by the end of October.

Max Browne may have just salvaged his career. After losing the starting job to backup quarterback Ben DiNucci last week, the Southern California transfer got the nod when the Panthers hosted Rice on Saturday. Browne completed 28-of-32 pass attempts for a career-high 410 yards and four touchdowns. Pittsburgh’s 42 points were the most it has scored since last season’s Nov. 26 trouncing of Syracuse. But without a rushing attack or a sturdy offensive line, there’s no telling if Browne will put up those numbers in an ACC contest.

Just when it looked like quarterback Chazz Surratt was finally starting to settle into the Tar Heels’ offense, the true freshman took a big step back against Georgia Tech. Surratt connected on less than half of his passes, averaged 4.7 yards per attempt and threw one interception. But there’s only so much he can do. UNC has already lost 13 guys for the season, including wide receivers Austin Proehl and Rontavius Groves and tight end Carl Tucker. The road doesn’t get any easier from here on out. Three of the Tar Heels next four games are against ranked opponents.

If it wasn’t for Michael Walker, BC might’ve been looking at another fourth-quarter showdown with a team from the MAC. The junior wideout returned three punts for 25-plus yards against Central Michigan, setting up three of the Eagles’ four touchdowns. A win’s a win, but the fact that BC mustered just 309 yards of total offense against a Chippewas defense that, before Saturday, was allowing 460 yards per game, is definitely a cause for concern. Walker’s burst of speed on special teams is a nice touch, but if the Eagles want to score 20-plus points in conference bouts, they’ll have to be more explosive on offense.