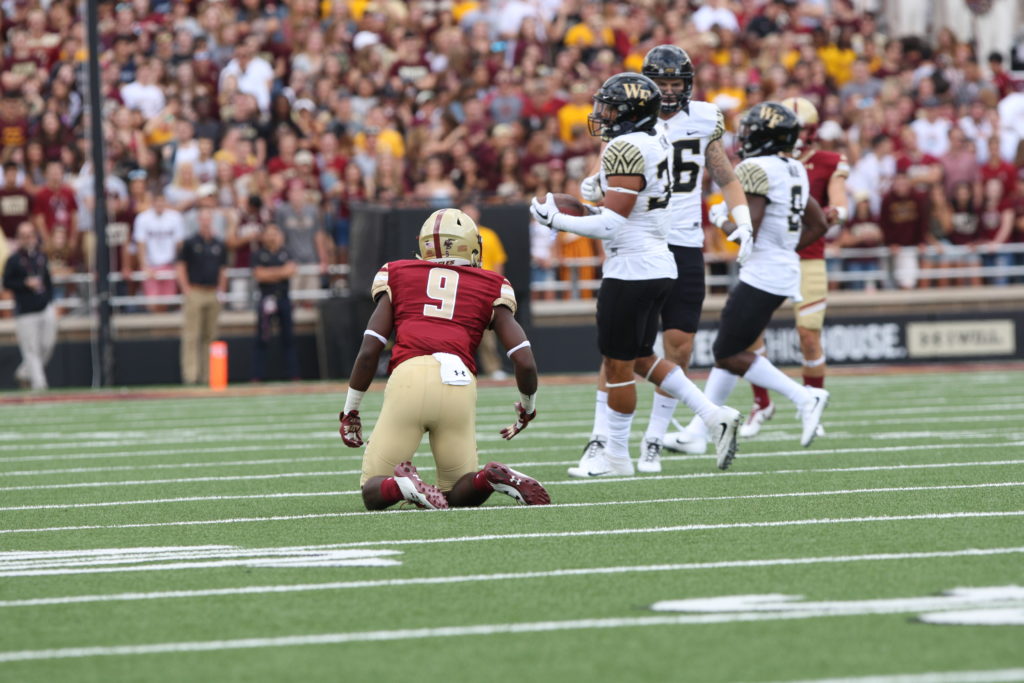 Boston College football quarterback Anthony Brown’s second pass of his collegiate career was a 50-yard bomb down the left sideline to a striding Michael Walker.

Even though the ball slipped through the hands of the junior receiver, many saw the shot downfield as a encouraging sign for what was to come. After all, Brown was just a redshirt freshman and it was only Week One. It was going to take some time for the Eagles to get the deep ball down. But no one thought it was going to take this long.

For just the third time this season, Brown completed a pass of 30 yards or more, this past week against Virginia Tech. The redshirt freshman faked the handoff to his tailback and took a five-step drop before lofting up a 32-yard jump ball for Kobay White. The 5-foot-11 receiver leapt in the air and secured the catch—his first 30-yard reception of his career. The reception took the monkey off White’s back. But if you ask him, it didn’t make up for the one he dropped the quarter before.

“It felt good, I mean obviously, but I should’ve caught the one before that,” White said after practice on Wednesday. “That was a good ball on his part, I just couldn’t come down with it. But [catching the deep ball] definitely felt like a relief—finally good to get one.

Brown had been trying to get him one for six weeks. Time and time again, the two redshirt freshmen have been out of sync. Sometimes Brown overthrows White, and other times he simply doesn’t put enough juice on the fly route. But it’s not all on him. White has some room for improvement too.

At times, he has struggled to position himself in front of his defender on the run, most notably against Notre Dame. Late in the third quarter, down one score, Brown delivered a beautiful 40-yard strike down the left side of the field. White couldn’t box out the Irish defensive back, and as a result, the ball was wrestled away from his hands immediately after contact. A critical third-down conversion turned into a deflating interception.

And occasionally, like the rest of the receiving corps, White drops a pass every once and while. Some hurt more than others, especially the type that have the potential to swing momentum. Here’s the one against the Hokies that White was alluding to.

Without the deep ball, Brown has been forced to stick to the short-game—screens, slants, crossing routes, you name it. The rookie is throwing the ball a mere 4.7 yards per attempt, the fourth-lowest average in the entire FBS.

Still, White, along with the rest of the receivers, has confidence in his team’s ability to hit the big play.

“I know that everyone on the team believes that we can throw deep balls, to any of our receivers.”

White says that his coaches always talk about how someone has to get the team going on offense. Before it’s too late in the game, someone has to make a play that can light a spark. Heading into a Week Seven matchup against Louisville—the fifth-best offensive team in the nation—the Eagles will need the deep ball more than ever.