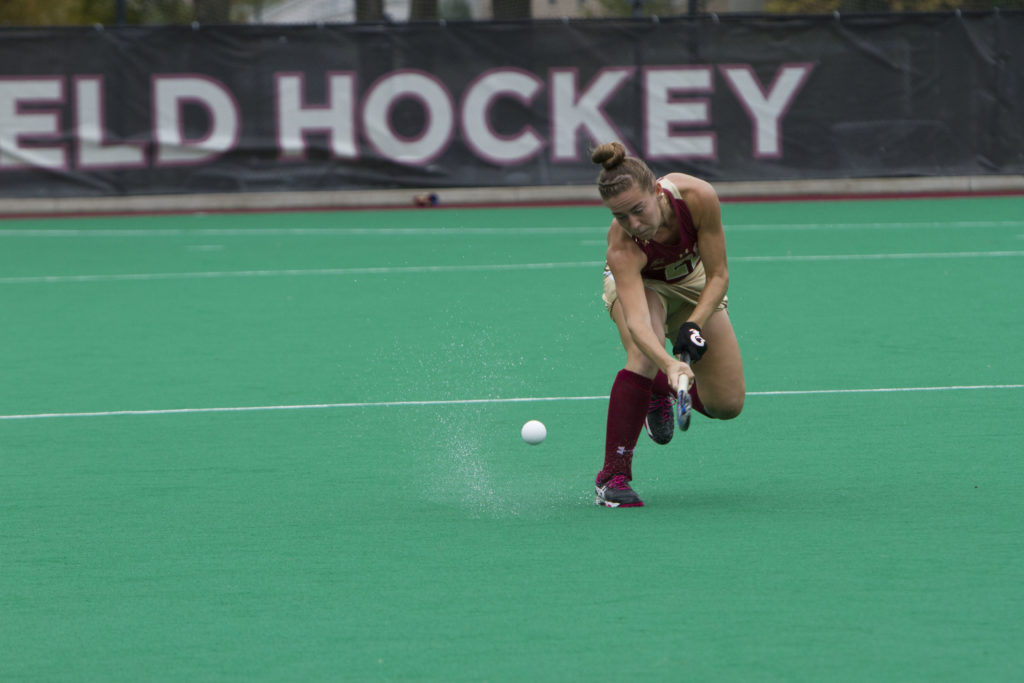 For the seventh time this season, Boston College field hockey was heading to overtime. After four goals, 25 total shots, and 70 minutes of play, BC and its crosstown rival, Boston University, were still tied. Thankfully for Eagles goaltender Sarah Dwyer, Sunday’s game wasn’t going to a shootout, like last week’s match against Harvard. In fact, it’d be over in no time.

BC only recorded one shot over the course of the first two and a half minutes of overtime. Kelly Doton decided that she needed to make a change. The third-year head coach substituted Fusine Govaert for Jaime Natale at the forward position. Immediately, the freshman made an impact.

Frederique Haverhals led Ymke Rose Gote down the sideline with an outlet pass. Gote received the feed and infiltrated the circle. As soon as she cut inside, she passed the ball to Govaert, about five feet in front of the net. Without hesitation, the Amsterdam native put the finishing touches on the Eagles’ 3-2 victory—her second goal in just as many games and her team-leading sixth of the year. Just like that, the match was over, and BC’s intercity sweep was complete.

It only took the No. 10 Eagles (11-5, 0-5 Atlantic Coast) three minutes and 14 seconds to get on the board. The scoring play started and finished at the hands of Alesandra Miller. After the senior crossed in a penalty corner, Haverhals whipped up BC’s first shot of the game. Even though it was blocked, it set up Miller for a rebound goal near the left post.

But like the Eagles’ previous two games, Sunday’s match was a back and forth affair. Approaching the 20-minute mark, No. 23 BU (9-6, 4-0 Patriot) knotted it all up.

Kara Enoch tracked down a pass from Terrior territory and weaved the ball through two BC defenders to fellow attacker, Allie Renzi. Dwyer came out of goal to try to stop the senior short of the net, but before she could do so, Renzi got off a shot. The ball soared over Dwyer and hit the back of the cage.

Right before halftime, BC reclaimed the lead. Miller dribbled the ball across midfield, eyeing an open Caroline McGovern. The senior dished a pass to McGovern, who then pushed the ball ahead into the circle. A few steps later, she delivered a cross to Lucy Lytle, positioned on the far post. Lytle tipped the ball past Terriers goalie Millie Baker for her fifth goal of the season.

But the momentum shifted after the break. BU rattled off the first six shots of the second half. Throughout the entire frame, the Terriers were flirting with an equalizer. They finally got one with just seven minutes left to play.

Shortly after Gote was booked for a green card, BU drew a penalty corner. Kali Shumock’s service was the catalyst for a Kiley Gallagher shot. Nearly identical to BC’s first goal of the game, the shot was blocked and cleaned up off a rebound. Katherine Scheerer corralled the loose ball and went top-shelf, forcing extra time.

The Terriers were merely postponing the inevitable. Three minutes into overtime, Govaert scored the game-winning goal, sending the Eagles home with their third-straight victory.

With the win, BC moves to 11-0 in nonconference play and 3-0 against its neighboring rivals—Harvard, Northeastern, and BU. Not to mention that the Eagles are now a combined 5-2 in overtime games and shootouts this season. But until they win an ACC game, none of those marks will really matter.