The Irony of “Free Speech”

Free speech is perhaps the most talked about issue on American college campuses. Nearly every day, it seems like there’s yet another think piece about how us millennial college students abhor confronting opposing views and will destroy the quintessential American right to free speech with our unwavering fealty to a über-politically-correct liberal agenda. “College Students vs. Free Speech” and “A chilling study shows how hostile college students are toward free speech” are two bombastic headlines from just the past few weeks.

Apparently, the situation is so dire that Attorney General Jeff Sessions is prioritizing protecting college free speech as a part of his national agenda. If you believe everything you read, then we latte-loving, snowflake millennials present a grave threat to the First Amendment.

Like many of the media narratives floating around these days, the pundits aren’t telling the whole truth. In fact, the true threats to college free speech, especially on Catholic campuses, are not leftist students, but rather conservatives.

Let’s delve into recent history. In September, BC theology professor M. Shawn Copeland and a school at which she was supposed to speak, Madonna College, agreed to cancel her event due to conservative backlash surrounding her support of the Catholic LGBTQ+ community.

One of the most prolific living Jesuits, Rev.  James Martin, S.J., was disinvited from speaking at Theological College due to his LGBTQ+ sympathies following a vicious social media campaign by zealous Catholic conservatives.

Martin has been canceled on two other occasions this year at the Order of the Holy Sepulchre and a Catholic Charity CAFOD, illustrating the terrifying power conservative people have over Catholic communities. It turns out that conservative Catholics fight fervently for “safe spaces,” free from any viewpoint contrary to their rigid orthodoxy.

Turning the mirror back on BC’s history, we can see a similar trend. Conservatives pose the gravest threat to free speech on our Jesuit campus. In 2005, the BC administration canceled a GLC-sponsored dance because it “promoted a lifestyle that conflicted with Catholic values.”

In 2013, BC shut down a play written by a BC student that tackled themes of homosexuality because it was deemed “too controversial.” Both of these actions which took away liberal students’ right to free speech were fueled by conservative pressure. BC is a private school that can legally limit free speech, but it doesn’t make their actions morally right.

This epidemic of conservatives silencing leftist voices is not unique to Catholic campuses, but rather simply a part of a larger national trend of successful, anti-leftist conservative campaigns.

Controversial whistleblower, civil rights activist, and trans activist Chelsea Manning was invited, and then promptly disinvited, from becoming a Harvard Kennedy School fellow because of intense backlash by the powerful conservative national security community. Princeton professor Keeanga-Yamahtta Taylor (who spoke at BC in the spring) was forced to cancel speeches in Seattle and California due to death threats against her for anti-Trump statements she made in a commencement address that was reported on by Fox News. Just this week, Drexel University put political science professor George Ciccariello-Maher on administrative leave after a rabid rightwing reaction to his tweets about how the Las Vegas shooting was fueled by ingrained American sexism and racism despite having ever-so-coveted tenure that is supposed to protect academic freedom.

Last year, nearly 200 professors nationwide were put on a “Professor Watchlist” for “advancing a radical agenda in the classroom,” subjecting them to targeted harassment campaigns and doxxing. It still exists and is constantly updated to this day. The watchlist was put together by Turning Point USA, one of the largest conservative collegiate organizations in the country that ironically cites “free speech” as one of its main values. Turning Point is establishing a chapter at BC.

The watchlist hit home here at BC, as history professor Heather Cox Richardson–one of BC’s most high-profile professors–was placed on the watchlist last October because she is “un-American” and “leftist.”

“So, yes, I have the dubious honor of being on the ‘Professor Watchlist,’ a list published recently by a young alt-right provocateur who knew that such a list would get media traction because of Senator McCarthy’s attacks on academics during the Red Scare. I made the list not because of complaints about my teaching, but because of my public writing about politics,” Richardson wrote in a Facebook post.

Richardson was removed from the list shortly after, but her presence on the list, along with the hundreds of other so-called “leftist” professors, including at least 4 in the Boston area, demonstrates that the Right will only fight for campus free speech as long as it aligns with its conservative values.

What frustrates me the most about the national conversation around free speech is the blatant hypocrisy on the part of campus conservatives. They trumpet the First Amendment as their scripture, their guiding light, often quoting Voltaire in saying that they may disagree with what liberals say, but they will defend to the death their right to say it.

Yet, time and time again, campus conservatives do exactly what they accuse the left of doing: silencing people’s right to speak. “Free speech” is a vapid rallying cry for campus conservatives, a reaction to the fact that most of their peers and educators are on the left-side of the spectrum, rather than a genuine reflection of reality. When the rubber hits the road, conservatives are to blame for silencing many voices on college campuses, turning into the very “snowflakes” they decry. 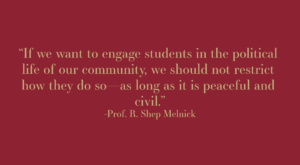 5 COMMENTS ON THIS POST To “The Irony of “Free Speech””