Louisville fans were not happy by the time their bourbon-fueled gameday experience was over late Saturday afternoon. They watched their Heisman hero total 500 yards and five touchdowns, only to be outdone by a notoriously low-scoring Steve Addazio offense led by a backup quarterback and a true freshman running back.

As SBNation’s Spencer Hall wrote on Twitter, “Giving up 35 points to Boston College is a sign your defense has termites and needs to be tented.”

And that was with 15 minutes remaining. By the end of the 45-42 upset, the Cardinals’ battered front seven looked overpowered against the Eagles equally-battered offensive line.

“This is about as tough a loss as I remember being around,” Louisville head coach Bobby Petrino said after the game.

What was frustrating for Louisville fans were the repeated missed tackles and blown coverages—plus, it looked like BC just wanted it more. So the 45,000 faithful in Papa John’s Stadium let the Cardinals know how they felt about it.

Boos showered from the stands on each of the Eagles’ final three scores, usually provoked by a thundering run from A.J. Dillon, who finished with 272 yards and three touchdowns en route to Walter Camp National Player of the Week honors. Fans retreated back into the heart of the city after the loss with their heads down. My Lyft driver ranted about Bobby Petrino’s short leash, and how his buyout was cut in half when athletic director Tom Jurich was canned.

Even the United Airlines representative, who spotted my BC sweatshirt after telling me my 6 a.m. flight was delayed again, couldn’t help but roast his team’s defense. “TURH-ible,” he said shaking his head. “Just TURH-ible.”

The loss comes at a troubling time for fans. In the background of football’s mediocre year lurks the impending FBI scandal that chewed up Rick Pitino and spit out grease. The future of Louisville men’s basketball is in serious jeopardy: After the program’s 2013 stripper scandal, some are even calling for the dreaded “death penalty.”

But there are two pieces of news this week that may ease die-hard Louisville fans’ qualms about their only local sports team.

First, the FBI investigation into the pay-for-shoe-deal debacle may not make its way back into NCAA jurisdiction in quite some time. That bodes well, as North Carolina just showed the rest of the country how to expertly “run out the clock” on the NCAA.

On Friday, the NCAA announced that it would not be handing down sanctions in an academic fraud case dating back nearly a decade. It concerned phony classes, and the high number of student-athletes who enrolled for bogus essays and easy A’s.

But because UNC also offered these courses to the general student body, they fit neatly into a loophole in NCAA bylaws. The university was in the wrong, the Committee on Infractions admitted, but couldn’t be punished because they didn’t break the rules. In other words, the NCAA provided a blueprint to its members on how to get away with academic fraud.

The NCAA’s disciplinary process, which dragged on for four years until the scandal was nearly a decade in the rear view mirror, worked in favor of UNC. It also didn’t hurt that the Tar Heels are the darlings of college basketball, with enough of a storied history to make any commissioner think twice about sanctions.

And so it was business as usual for Roy Williams & Co. this weekend.

This is fake education. It’s exposing the fallacy of the modern student-athlete, and the inability of the NCAA to control its member schools. And it’s why any harsh sanctions that the NCAA deals Louisville won’t hold up in the court of public opinion. It’s hard to crack down on the Cardinals if the NCAA just gave the Tar Heels a free pass for cheating.

Unfortunately, Mark Emmert & Co. seem unconcerned with public approval. Otherwise, they wouldn’t prevent a USF punter from using his popular YouTube account while they cling to to their outdated model of amateurism. It isn’t ridiculous to think they could make an example out of Louisville and impose penalties that could damage recruiting for years.

But even if worse comes to worst, Louisville will be just fine. Just look at Penn State. After receiving sweeping sanctions in the wake of the Jerry Sandusky-Joe Paterno scandal, the football team went won eight games the follow season. The Nittany Lions made bowl games in 2014 and 2015 before finishing ranked seventh in the country in 2016. This year, they’re considered a serious College Football Playoff contender.

So cheer up, Cardinal fans. The next few years will likely be painful. You’ll lose some recruits, a few fans, and maybe one national championship from 2013. But Louisville men’s basketball, like Penn State football, is engineered for success with its resources, facilities, and fanbase. And you really only need five players to turn things around—that’s only a couple recruiting classes worth of talent.

Yes, the loss to BC stings. And the next couple years will likely be painful. But whatever happens, just know that it’ll get better soon—and we over in Chestnut Hill have suffered through much worse. 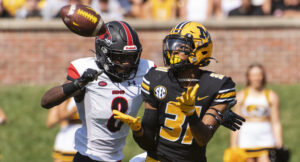