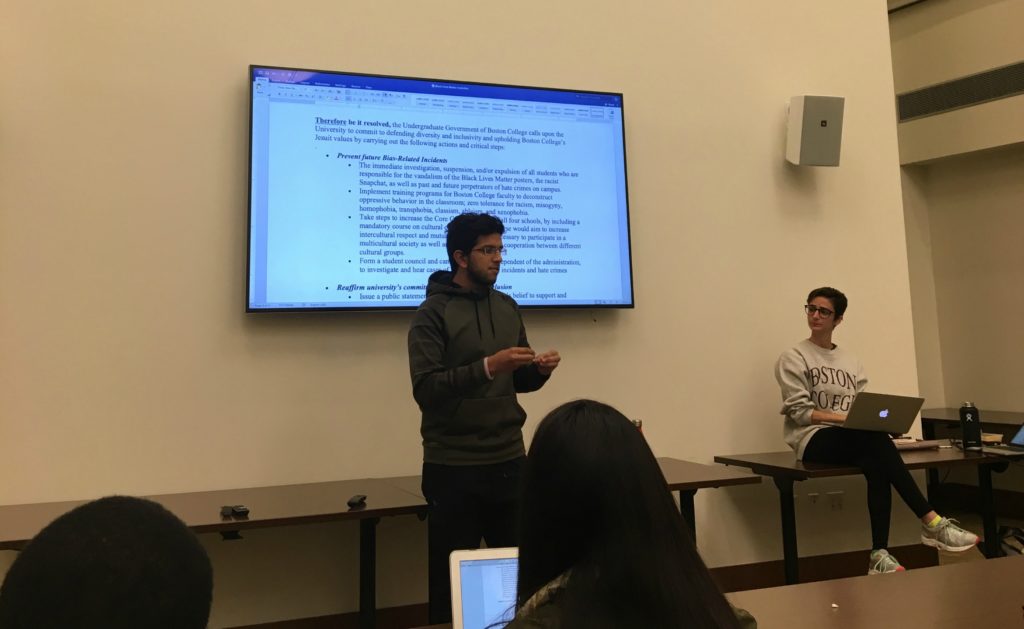 The Student Assembly of the Undergraduate Government of Boston College introduced A Resolution Concerning Bias-Related Incidents on Tuesday. Sponsored by Aneeb Sheikh, MCAS ’20, and six co-sponsors, this resolution was created and presented in the wake of recent incidents in which two Black Lives Matter signs were defaced and a private Snapchat of a racist message was spread across social media. The meeting ended before the SA could officially proceed to debate the resolution.

Vice President of Student Affairs Barb Jones and Dean of Students Thomas Mogan attended the meeting to listen to the presentation, contribute to the conversation when necessary, and answer questions from UGBC members and commentators from the Facebook livestream. After being questioned regarding the school’s policy regarding poster vandalism, Mogan explained what the consequences typically are.

“It’s a violation of poster policy,” Mogan said. “As far as the consequences, that would fall under vandalism.”

The proposal calls for the investigation, and suspension if found responsible, of the student or students who committed these actions, along with various other arguments, including an administrative zero-tolerance policy toward racism, misogyny, homophobia, transphobia, classism, ableism, and xenophobia.

Sheikh believes that by introducing and passing this resolution, students of color will have greater advocacy and awareness of their struggles implemented on campus.

“As student leaders, as members of the UGBC, as representatives of the student body, I think it’s up to us to now craft a voice for the people,” Sheikh said.

If the student is found guilty, Sheikh said, then the SA has a responsibility to call for this individual’s suspension or expulsion. Sheikh said that if there is no action taken against the student, it will empower a culture of other racist acts on campus.

According to the resolution, one plan proposed to combat this racist behavior was the reaffirmation of the University’s commitment to diversity and inclusion on campus. This called for the implementation programs to raise awareness about cultural awareness, public statements to be made by administrations, and increasing the number of professors of color in the University—all longstanding demands by students. The resolution also calls for a democratically elected student position to be added to BC’s Board of Trustees.

An additional demand is that BC rescind comments by University Spokesman Jack Dunn that the University is not institutionally racist, which were made in a 2015 interview with The Heights.

“We need some form of representation to this elite group of people,” Sheikh said. “We need to have a voice from the student body who can say the issues that students are concerned with. The Board of Trustees is not [currently] receiving that information.”

Featured Image Courtesy of Sam Browning / For The Heights