The Herb Brooks National Hockey Center was silent. Just seconds before, Casey Fitzgerald dove out in front of Ryan Edquist to attempt to block a shot. Robby Jackson wasn’t fazed, and fired a slapshot that buried itself into the back of the net. The fourth consecutive goal by St. Cloud State was being reviewed for goaltender interference. After a minute of debate by the referees, the goal was called good, causing the crowd to erupt in cheers. Boston College men’s hockey had never met the Minnesota team, and after an early lead, the Eagles fell short of a victory, falling 5-2.

The Huskies (4-0) are known for being an aggressive team, and early into regulation they lived up to the reputation by applying heavy pressure on the Eagles (1-2-1). St. Cloud State constantly kept the puck in front of Edquist, forcing him to scramble to save multiple shots. The presence on BC’s side of the ice soon turned sour when Judd Peterson was sent into the box for slashing less than five minutes in. The Eagles quickly took advantage of the power play, peppering goaltender Jeff Smith with shots. BC found its break when Fitzgerald took a shot from the blue line. Logan Hutsko found himself in the right position on the outer edge of the Huskie defense and dipped down low to bury the shot into the back of the net. The power-play goal was Hutsko’s first, giving the Eagles an early lead.

As the game returned to full strength, St. Cloud State looked to quickly tie up the game when Peterson got in close to Edquist. The Minnesota native kicked the puck away with his pad, and closed in on the rebound to deny the Huskies the goal they wanted. BC soon found itself one player down when Chris Brown was called for tripping. As the penalty was winding down, the St. Cloud State offense was closing in on Edquist. He dove out of the cage in order to save the puck, and caught it to deny the Huskies the rebound opportunity. BC headed into the locker room up one point on the No. 3 Huskies.

The Eagles came back onto the ice adding to their early momentum. David Cotton was called early on for elbowing, but the penalty was killed off easily by the Eagles. Just as the game returned to full strength, Blake Winiecki took a head-on shot that was blocked by Edquist. Brown was there to get the rebound, and headed down the ice toward Smith. He drove it home with a powerful shot, giving the Eagles a 2-0 lead. BC’s lead was soon cut down, though, when Edquist made a save that caused him to fall on his back. The puck danced around the line and Kevin Fitzgerald was able to push it past Edquist’s head and into the twine.

Less than two minutes later, Peterson’s shot went wide. Jack Poehling was there to scoop it up, and circle around the cage to get past Edquist, tying the game. After penalties called on BC’s Fitzgerald and Will Borgen, the period ended without either team able to gain an advantage on the other.

The last 20 minutes opened with Borgen immediately getting booked for holding. Despite the advantage, the Eagles couldn’t capitalize on the power play. Chris Grando was then called for hooking, and less than 30 seconds after BC regained full strength Jacob Tortora was sent into the box for too many players on the ice. Jack Ahcan saw his opportunity when Edquist left a pocket open. His soft, low shot wasn’t seen by the sophomore, and the Eagles gave up their first power-play goal of the season. The Eagles continued to be their own worst enemy when Cotton was called for tripping. Despite being able to kill-off the penalty, the Eagles found themselves one player short when J.D. Dudek was sent in for charging. The Huskies connected for their fourth unanswered goal, pulling farther ahead of the Eagles.

Both Connor Moore and Julius Matilla were called for roughing, and head coach Jerry York tried to gain an advantage on St. Cloud State by pulling Edquist out of the goal when both players completed their penalties. The advantage didn’t help, and Nick Poehling took a head-on shot 30 seconds before the end of regulation to seal the victory.

The Eagles played a very physical game, and it took a toll on the penalty killers. BC played 20 minutes down a player to the Huskies’ eight, and the Eagles were battling their own frustration. After making four unanswered goals against Providence last weekend, BC saw itself on the other end when St. Cloud raked in five. Edquist made an impressive 42 saves, but it wasn’t enough to stop the Huskies from taking home the first victory in the weekend series. 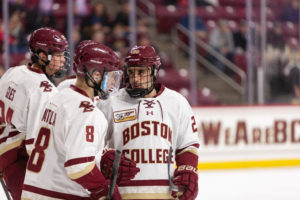