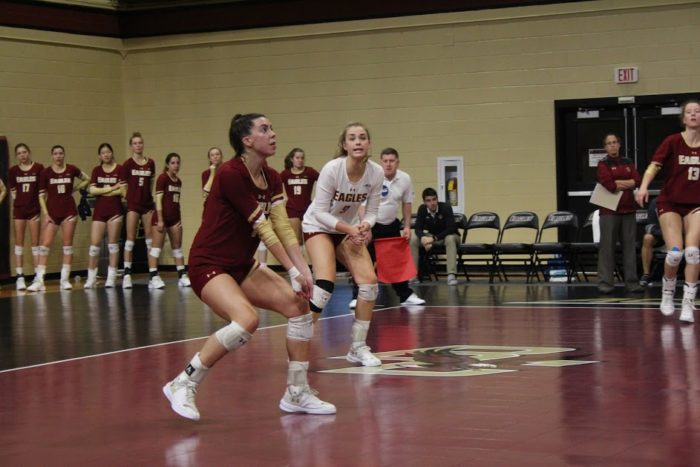 After two straight losses against ACC teams, Boston College volleyball traveled to Clemson on Friday and Georgia Tech on Sunday for crucial matchups against conference opponents. The Eagles’ two most recent wins were their victories at home over these two programs, so they hoped to best the Tigers and Yellow Jackets again and get their season back on track. But these two matchups ended much differently than the previous games.

The Yellow Jackets controlled the second set by leading early, but BC pulled back to down 7-5 and within striking distance after a kill from Lynn Braakhuis. Georgia Tech, however, was just starting to heat up, and stole seven of the next eight points from the Eagles to take total command of the game. BC would not be bested without a fight in such a significant game, and slowly whittled away at the Yellow Jackets lead until the Eagles only trailed 21-16. But  Georgia Tech was determined, and won the next four points to again win the match, 25-16.

Unfortunately for BC, the third set was very similar to the two previous games. After splitting the first two points with the Eagles, Georgia Tech picked up the next five scores and BC once again found itself on the wrong side of a one sided stretch of play. The Eagles traded off with the Yellow Jackets and the two teams each took eight of the next sixteen points, but that would not be enough to overcome Georgia Tech. The Yellow Jackets ended the game and the match with a 4-0 run, winning the third game, 25-15.

On Friday, the Eagles lost a difficult road matchup in three sets to Clemson (6-15, 1-8). BC began the first set with a lead as Cat Balido blasted two aces early. The Eagles were able to hold on to that edge until the Tigers leveled the score at 17. Clemson rode the momentum, and was able to go up 23-21, but BC would not go down easy and evened the score at 24. However, the comeback train ran out of gas for the Eagles, and Clemson won the next two points to take the first set. Amanda Chukwujekwu played exceptionally for BC and had five blocks in the first game alone.

The Tigers fed off of their victory in the first game, and rattled off two rallies quickly in the second set. These runs of 5-0 and 6-0 left the Eagles in a hole that they could not ascend from and Clemson snatched the second game 25-16. The Tigers were not yet done, and opened up the third set with a 5-1 stretch. BC came charging back and were able to put together a 7-3 surge that left Clemson’s lead diminished. Even with a valiant effort from the Eagles, the Tigers regained control of the game and finished off BC 25-22 to complete the sweep.

Braakhuis earned her fifth double-double of the season against Clemson and finished with ten kills and ten digs. She also played well against Georgia Tech, as she led the team with eight kills and 21 total attack attempts. Balido also performed admirably in both matches, leading the team with 12 kills including two aces against the Tigers, and adding five more kills against the Yellow Jackets.

BC has now lost each of its last four matches by being swept in three sets. The Eagles will look to rebound against at home against a Virginia team that has yet to win an ACC match this season.