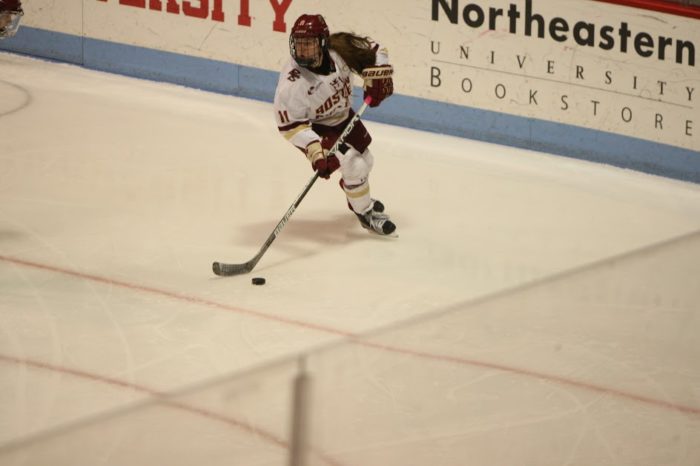 Before the season started, Boston College women’s hockey head coach Katie Crowley guessed that sophomore forward Caitrin Lonergan would make a big jump in production this season. Last year, Lonergan recorded 33 points, cementing her status as one of the top freshmen in the country. Crowley believed she could even double that mark this year.

After a dominant performance in the Eagles’ win over the University of Vermont, Lonergan is currently on track for 88.4 points this regular season.

Her contributions against the Catamounts came in the form of a hat trick to help BC to a 4-2 victory. It brought Lonergan’s point tally this season to 12 through five games and ensured that the Eagles remain undefeated on the season. BC (4-0-1, 1-0-1 Hockey East) also saw an excellent performance from netminder Katie Burt, who finished with 20 saves, while Vermont (2-5, 1-3) goalie Sydney Scobee made 33 saves on the day.

Scobee began weathering shots early in the game, as the Eagles mounted an aggressive attack from the very start of the first period. But despite BC’s best efforts, none of its opportunities paid off at the start of the game. In the first seven minutes, Scobee denied Serena Summerfield, Toni Ann Miano, and Daryl Watts, while Ryan Little’s shot sailed wide of the goal.

Vermont pushed back against the Eagles, turning missed BC shots into transition opportunities during the first period. Burt remained solid in goal as well, denying each chance Vermont mustered up. That pattern continued throughout the first period. Each team had significant opportunities, but failed to ultimately find the twine—until the final minute of the period, that is.

The Eagles spent time on the power play when Vermont’s Eve-Audrey Picard was called for high-sticking. During the power play itself, BC managed a couple of chances. Cayla Barnes shot, but the puck went wide of the net, while Scobee saved shots from Watts and Grace Bizal. With 30 seconds left in the period, Vermont successfully killed the power play and returned to full strength.

Four seconds later, Lonergan finally beat Scobee to open scoring in the game and give BC a 1-0 lead.

Makenna Newkirk skated behind the net and up around the ice to the faceoff circle before firing a pass down to Watts, hanging by the goalpost. Watts fired a quick pass across the goal to Lonergan, waiting on the other side. Lonergan swept the puck in the back of the net as Scobee, out of position on the other side of the goal, failed to slide over in time.

Although the Eagles carried all of the momentum into the first intermission, they simply could not beat Scobee in the second period. She matched her first-period output with an additional 10 saves, preventing BC from cushioning its lead during the middle frame of the game. Meanwhile, Burt made eight saves, but Vermont’s continued pressure was eventually rewarded with a game-tying goal.

With just about five minutes to go in the period, Vermont pulled Scobee in order to put an extra attacker on the ice. This move paid off for the Catamounts. Amanda Drobot fired a shot toward the goal, but it was blocked before it could reach Burt. The puck deflected off and fell in front of Olivia Kilberg, who beat Burt on a backhand shot for her first career goal and tied the game up at one apiece.

Undaunted, the Eagles kept up the pressure on Scobee and the Catamounts’ defense, but Vermont continued to deny each chance. The teams headed into the third period all tied up.

It didn’t take long for BC to break the tie in the third period, however. Lonergan found Watts open, and the freshman charged down the ice, weaving through Vermont defenders on her way to the net. She snuck the puck past Scobee on a backhand shot to break the tie, and BC went on to lead for the remainder of the game.

A few minutes later, the Eagles finally converted on a power play for their third goal of the game. Watts and Makenna Newkirk, sweeping toward the goal, worked together to mount an attack on Scobee. Watts dropped a pass back to Newkirk, who fired a shot off. Scobee deflected the shot on her skate, but the puck fell straight in front of Lonergan. Lonergan wasted no time in poking the puck through the legs of a Vermont defender and into the back of the net.

Of course, the Eagles couldn’t make it easy on themselves, and an interference call on Barnes gave Vermont a crucial power play. The Catamounts took advantage of the power play and scored on Burt, bringing BC’s lead to just one goal and renewing their comeback hopes. Ali O’Leary slid a quick pass in to Alyssa Gorecki. While off-balance, Gorecki knocked the puck into the net.

Lonergan hammered the final nail in the coffin late in the third period when she completed her hat trick, cementing the final score at 4-2, BC. She skillfully skated through Vermont defenders and across the face of the goal before firing a shot back into the far side of the net. It was a dominant win for the Eagles, who bounced back from a tie against Connecticut in the first Hockey East game of the season.