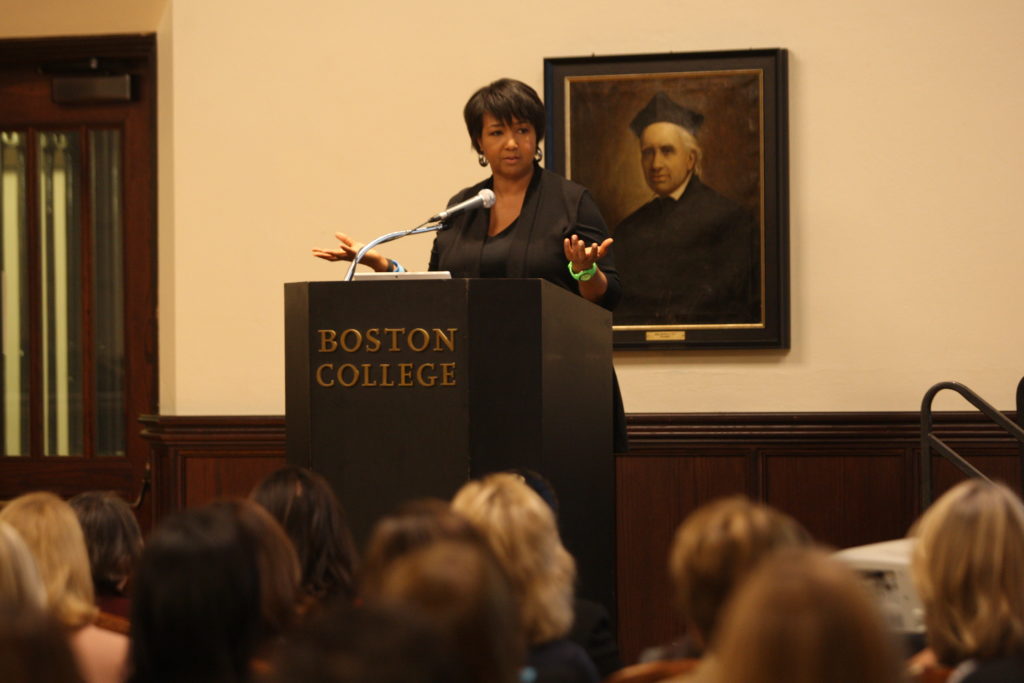 Guest starring in Star Trek was no challenge for Mae Jemison, as her knowledge of outer space was vast. She was the first woman of color to be deployed in space. Her decades-long career has mostly been spent working on the 100 Year Starship project, which seeks to accomplish interstellar travel within the next 100 years.

Jemison spoke at the third annual Council for Women of Boston College (CWBC) Colloquium on Thursday evening. This year, the Colloquium focused on the role of women in science. Jemison promoted the importance of female contribution in fields of STEM and also elaborated on her current project, the 100 Year Starship, as well as its implications regarding life not only in space but also on Earth.

Following a discussion with a small group of students, Jemison began her talk emphasizing the importance of intention, outcome, and individuality in scientific fields.

She immediately progresses to highlight the importance of perspective and the constant necessity of experience to guide further discovery. Because of the creative influence she witnessed growing up in the 60s, Jemison “believe[s] pursuing the extraordinary of tomorrow creates a better world today” and stresses the role of curiosity along with formative aid in order to contribute to worldwide progress. Star Trek was one of the movies that influenced her interest in space.

From this concept of curiosity, Jemison explores the restrictions of those included in the creation process: “It makes a difference who’s involved; so, if that’s where we talk about perspective, who’s involved? Who resolves things?”

Shown in a survey of members of the American Chemical Society (22:25), when asked where they were most discouraged from pursuing a STEM career, 40 percent of them said it was in college by professors. The underrepresented demographics in the fields of STEM do not lack people of interest, but rather lack the necessary encouragement from imperatively formative instructors, which prevents their success in STEM fields.

“When we think about women, how frequently do we let women … come up with a new idea? We accept it from guys, but we give women holy hell,” Jemison said, calling for a change in society’s reactions based on gender to technological innovations.

Jemison, however, said that these issues stem not from the field, but from societal preconceptions. She suggested three ways society can improve the education of girls to diminish this inequality: exposure to the fields, experience in the fields, and encouraging expectations of their success in these fields.

From here, she transitioned to speaking largely about her project, the 100 Year Starship, formed to ensure “that we have the capabilities for human travel beyond our solar system to another star within the next 100 years.”

Jemison stressed that the capabilities—not necessarily the implementations—of interstellar travel are most important because we must “reevaluate what we think we know” to form these strategies.

“The challenge of human interstellar travel mirrors the challenges that we face in our society today,” Jemison said. “We can start to discuss some of the issues … in ways that we would never be able to think through them here if we would just say ‘here on Earth.’”

Being certain that Earth remains a planet inclusive to mankind is imperative; although it is the goal of the 100 Year Starship to make an extended projection of human beings into space possible, the program encourages the development of society to become more inclusive not only of greater diversity in the contributors to STEM fields but also of the possibilities that space can produce for life here on Earth.

Not only does Jemison work to promote an inclusive society so that women can be seen as active contributors in STEM fields, but her work encourages inclusion among people in relation to earth and space.

“How do we get people to, hopefully one day, create this tapestry of this world around us so that we know that we are connected on this starship to earth and to space and to each other?” Jemison said.