Quarter-full bottles of wine littered the oak table. A scowling W.B. Yeats stared down at the scene with disdain, melancholy, and a hint of jealousy from his framed photograph perched on one of the bookshelves lining the room. Each bookshelf, spread across the east wall, was full of the greatest literature written on the small island that produced such writers as Yeats, Beckett, and Joyce—Ireland. Rain struck the window pane to the west, a quiet arrhythmic murmur, turning the evening twilight mottled and gloomy in just such a flowery way as to encourage the purplest of literary prose. In this small side room of the Connelly House, a motley crew of English department hooligans gathered last April to read and analyze a single page of Joyce’s dreamy riverrun, past Eve and Adam’s, from swerve of shore to bend of bay, masterpiece of recirculation Finnegan’s Wake.

The grad students, professors, novelists, and slightly overwhelmed, rain-soaked undergrads began reading the work, when their attention was taken by a newcomer to the scene, the man who started this weekly Finnegan’s Wake reading—Joe Nugent.

Nugent walked into the room to the usual fanfare and shifted the focus from Joyce to another Irish writer, one less well known. Flann O’Brien, the columnist, novelist, and literary troublemaker, is going to be the subject of Nugent’s latest creative project.

If another professor walked into this reading and announced plans to create a podcast about O’Brien, most of the listeners would have nodded politely and then two months later the idea would have died a quick death. But Nugent’s projects have a certain spark to them—one that inspires the best of Boston College to come out and try to make something slightly crazy work. Last year, he started work on a virtual reality video game based on James Joyce’s seminal novel Ulysses. A video game based on a novel that takes place over one day, contains mind-boggling connections and references that could short-circuit the brain of the most tested reader, and spends pages on a middle-aged man sitting on the toilet does not sound like an immediately viable idea.

The game demoed in Dublin this past summer.

Nugent and his team of students, who are still working on the game, made it happen. In the wake of that success, he took on a new interest.

When he realized that his students slinking into class with their headphones in might be listening to something a bit more interesting than the latest pop anthem, he realized that there was a way to turn that energy into a tool for teaching. He had proven that he could create these ambitious projects, so when he announced his plan to create a podcast harnessing the subatomic energy of O’Brien, people listened.

The rest of that spring evening went as many Finnegan’s Wake readings do—strangely—and the assembled Joyceans left with only the slightest inkling on how the project might go.

Less than a year later, on Oct. 21, a similarly motley crew of literary misfits and podcast warriors gathered in Burns Library for an event titled “The Atomic Bicycle in the Modern Era.” Attendees included the members of the beautifully-titled Omnium Consortium, a group of undergraduate and graduate students Nugent gathers every Wednesday to put together a podcast, talk O’Brien, and figure out how to bring the pedagogical possibilities of a podcast into the classroom. Actors, journalists, columnists, podcasters of all stripe, and interested students also joined together for this event. Spearheaded by Nugent, the meeting was the first step toward coalescing this podcast project into a complete and focused whole.

Early into the day, David Gullette, literary director of the Poets’ Theatre, stood in front of the room and recited:

“The chest to him was wider than the poles of a good chariot, coming now out, now in, and pastured from chin to navel with meadows of black man-hair and meated with layers of fine man-meat the better to hide his bones and fashion the semblance of his twin bubs,” he said.

That poetic description of a hairy fellow’s chest comes straight from the pen of O’Brien. It’s amusing, eloquent, and a little bizarre, like most of O’Brien’s work. O’Brien’s best-known novel, The Third Policeman, was never published during his lifetime. The atomic bicycle from the podcasting event’s title comes from that novel. Due to subatomic particles, certain folks in the novel’s small Irish town have begun to merge with their bicycles. They ride them so often, you see, that their molecules and the bicycles’ molecules have begun to merge. And now we have people running around who are half-bicycle—who lean their elbows against walls like kickstands—and bicycles who are half-human. As Nugent first began developing the idea for this podcast, he landed on O’Brien as a prime subject.

“I’ve been excited by Flann O’Brien forever,” Nugent said. “We just realized that the funniest writer in Ireland, who’s been neglected for a very long time in America … his star has been rising very rapidly in English-speaking countries … We think this is time to launch him.”

Despite this excitement, a podcast subject is not enough. Creating a high-quality podcast is complex. Making it engaging and focused is only one difficulty. The team has to find the right equipment, figure out the proper auditory format, and consider the possibility of turning the podcast into a teaching tool for the classroom.

Nugent brought together students for the project, and after the atomic bicycle podcasting event, he will take the next step toward pursuing it—from exploring literary discussion to figuring out how to stop people from loudly exhaling directly into the microphone.

The day straddled the line between those two drastically different realities of podcasting. On one side, there were readings of O’Brien’s prose, discussions of storytelling, and delicious chocolate-covered strawberries. On the other hand—print is dead, journalists are poor, podcasting is a business, the listener is fickle, and while the strawberries are delicious, don’t forget they are fattening and loaded with teeth-rotting sugar. Podcasting may be a fascinating manner of reaching out and telling stories, it is also part of a world of business and production.

In the great effort to create this podcast at BC, Nugent brought in several speakers to discuss the material realities of such a project. Pagan Kennedy, who works as a journalist, columnist, and novelist, opened the day of discussion.

“I’m really excited to be here because I’m trying to figure out this thing that we call podcasting, which is really an emergent form and kind of the Wild West,” she said.

The other speakers continued in the same vein—podcasting as a wild and untamed territory. The storytelling potential, monetary concerns, and simple auditory realities all played a role. Charles M. Sennott spoke about his firsthand experience creating the podcast GroundTruth, which tells longform reported stories—such as his own story about working as a journalist in the Middle East.

“You can connect through recording people’s conversations in a deeper way than any other way,” he said. “Because they suddenly feel really heard.”

After Frank McNally, a columnist for the Irish Times, discussed O’Brien’s history of writing fake letters to the editor, the day ended with a panel of podcasters discussing their craft. As the medium continues to advance, podcasting is a massive field full of people trying to figure out not only how to make a good podcast, but what a good podcast even is. Guiding lights—Serial, S-Town, The Daily—serve as basic templates, but everything else is up for grabs.

Two of the speakers, Kyle Claus and Alex Reimer, produced Buswell Street, a podcast about media and politics.

“We got started in a Cleveland Circle basement,” Claus said. “Does not get much grungier than that. Especially cause we started with one mic and had to talk uncomfortably close to each other’s faces. But that’s friendship, man.”

Portland Helmich presented her experience creating Stranglers, an in-depth look at the Boston Strangler case. Helmich and her team sorted through hours and hours of tape to put together the narrative, which received considerable attention and performed well on iTunes. From the amateur Cleveland Circle creations to the full-blown longform reportage, the panel was full of insight into the world of podcasting.

Amid all this advice and far-reaching concerns, Nugent’s next step is to bring all these ideas together and figure out a clear path forward for the podcast.

As the attendees dispersed into the grey autumnal day, visions of subatomic fusions of man and machine dancing in their heads, Nugent and company headed off to the perfect place to foment the beginning of what will surely be a podcast project to remember—the Irish Village for a pint of Guinness. 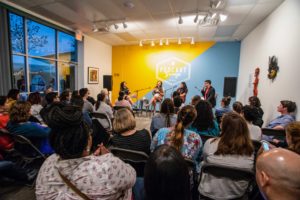